The Internet of Things (IoT) has already made a huge impact on the world of sports and personal fitness.  Wearable activity trackers offered by a host of companies can track everything from steps taken to heart rate to sleep hours and quality.  In 2012, tennis players gained access to IoT data and tracking through the introduction of Babolat Play, a connected tennis racket that uses an accelerometer and a gyroscope to record and transfer data about power, endurance, and technique to a phone, tablet, or computer [1].  As technology continues to gain a strong foothold in this traditional sport, it’s no surprise that the Grand Slam tournaments are looking to make the IoT work for them as well.

A Brief Context and History of Technology at Wimbledon

The Grand Slams (Wimbledon, the French Open, the Australian Open, and the US Open) are the four most important annual professional tennis tournaments.  Of these, Wimbledon (est. 1877) is the oldest and widely considered to be the most prestigious [2].  Wimbledon is also known for respecting tradition: it still requires players to wear all white for matches, it waited 14 years to make the switch from white to yellow tennis balls (yellow balls were first introduced in 1972 for easier TV viewing), and it is the only Grand Slam to still use grass courts.  However, despite dedication to tradition, Wimbledon does have a history of integrating technology into tournament operations.  It partnered with IBM in 1991 to introduce radar technology that measures ball speed, and in 2006 it adopted Hawk-Eye, which uses 10 cameras to pinpoint where the ball hit the ground, allowing players to “challenge” line calls they believe to be incorrect [3]. 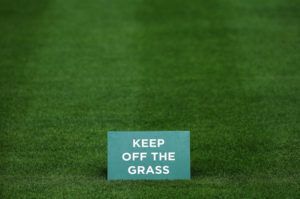 In 2016, Wimbledon faced a particularly challenging situation: “During Wimbledon fortnight, sports fans would be spoilt for choice: in addition to the tennis, they could watch three international cricket matches, two Formula One Grand Prix, nine stages of the Tour de France, and nine crucial matches in the Euro 2016 football championship” [4].  In response to this challenge, Wimbledon partnered with IBM to introduce new technologies to is repertoire to help better connect with fans.   A primary concern for Wimbledon is generating content that resonates with its audience, which is becoming increasingly difficult to track as social media activity continues to grow and become more complex.  While IBM developed several solutions, including using machine learning techniques to generate valuable information about what content will best resonate with fans by reading social media posts, this post will focus on one particular solution: cameras that read your facial expressions [4].

“If you’re lucky enough to get a ticket to this year’s Wimbledon tennis championships, be prepared to be scanned by a supercomputer” [5]

For the first time, the 2016 Wimbledon tournament featured connected cameras that sent images to IBM’s Watson, which analyzed the images to determine fan emotions. So why is Wimbledon taking this dramatic step? At first glance, the information gathered from this technology seems like nothing but a novelty – sure, it’s fun to know who the majority of the crowd is rooting for during a particular match, but can that information actually be used to create and capture value? Although Wimbledon has been quiet about this project, the consensus is that they are looking to use this technology to sell more merchandise and market future tournaments [6]. 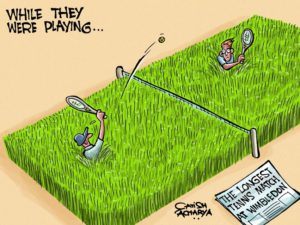 First, regarding marketing future tournaments, Wimbledon has no problem selling out tickets.  In fact, there are numerous multi-page blog posts that walk aspiring ticket owners through the ins-and-outs of navigating ticket purchasing (one example here), and the line to get day-of tickets is so famous/infamous it’s not a “queue” it’s The (capital) Queue.  Additionally, data about tournament attendee player preferences would not give tournament directors insight into the preferences of the broader tennis community.  Yes, plenty avid fans travel to Wimbledon, but the crowd will always be disproportionately British and presumably will have a stronger preference for British players.

Second, regarding merchandise sales, the connection between selling branded Wimbledon merchandise and knowing preferred players seems distant, particularly because Wimbledon doesn’t generally sell sponsored merchandise: “One of the Club’s key objectives is to enhance the unique character and image of The Championships by keeping our courts and grounds relatively free of commercial sponsorship and product placement, hence the lack of overt advertising around the Grounds” [7].

It is without question cool that Wimbledon can know who the crowd prefers in a close match, and that information would no doubt be entertaining for viewers at home.  But can they capture that entertainment value?  Given the potential legal challenges and uncertain connection to revenue, I believe their efforts are better spent elsewhere. 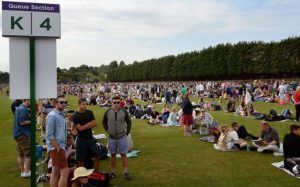 Dude, Where’s My Car? Car Hacking in the Digital Age

Telemedicine: Removing the “Borders” in Doctors Without Borders