A New Era of Satellites

It was only 61 years ago that the first satellite, Sputnik, was launched by the Soviet Union [1]. Today, there are over 4,800 satellites in orbit [2]. Much of this growth can be attributed to the increasingly attractive launch of smaller, lightweight satellites into low earth orbit (LEO) [3]. The LEO orbit is the closest band to earth (120-1200 miles) and is one sought after by technology companies for its data applications and lower latency levels [4]. In 2017, 292 of these smaller satellites were launched, up from just 55 in 2016 [5]. Furthermore, we are seeing a shift from the public sector to more commercial satellite launches (Figure A) [6]. 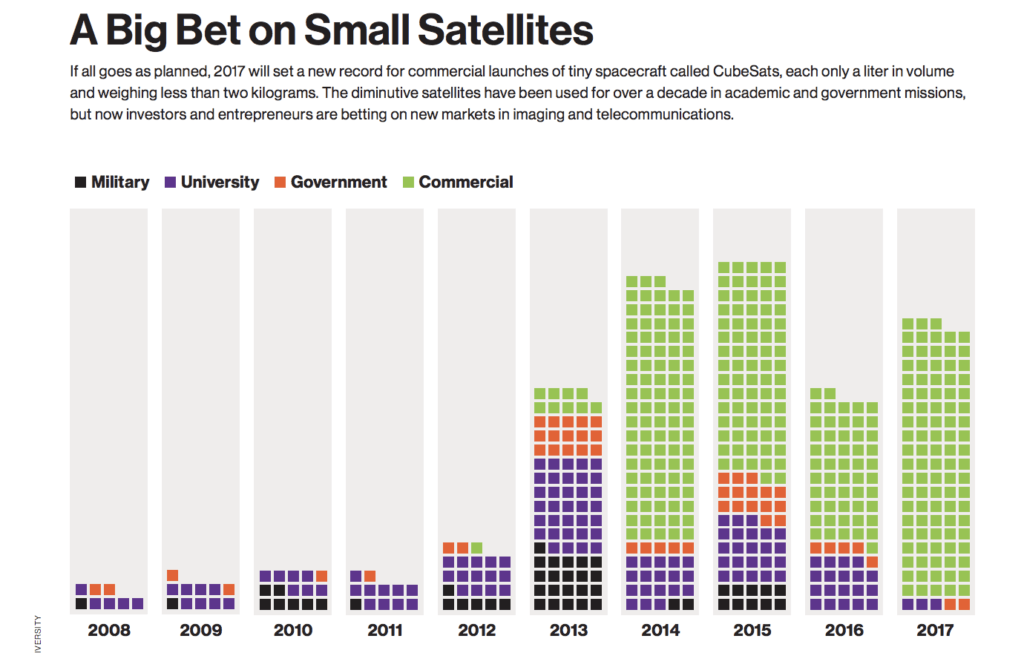 What has made this possible?

Advances in technology have allowed smaller satellites to perform the same tasks as their predecessors at lower orbital levels [7]. Additionally, we are seeing an emergence of new commercial launch providers working to reduce the cost of the rockets used to launch these satellites. One of these companies is Rocket Labs, who built a first of its kind rocket engine composed entirely of 3D printed parts [8].

The Benefits of 3D Printing

Additive manufacturing, often called 3D printing, “is a process used to create a three-dimensional object based on a digital file.” [9]. Unlike traditional manufacturing, parts are built by adding materials one layer at a time based on an easy to update digital design. In the case of the aerospace industry, this allows for the creation of lighter weight, more fuel efficient engines that can carry heavier payloads into space [10]. This has resulted in a host of new startups emerging to try to capture the expected increase in commercial satellite launch demand.

Rocket Labs, a US Aerospace Company, was founded in 2006 by Peter Beck with the mission of “opening access to space to improve life on Earth … by developing and launching advanced rocket technology to provide rapid and repeatable access to orbit for small satellites” [11].  Rocket Labs has differentiated itself by building the first ever rocket engine manufactured entirely by 3D printing (Figure B). The use of additive manufacturing is a critical factor to their success as it allows for “unprecedented launch frequency” by reducing the engine build time from months to just 24 hours [9]. This will allow them to launch more payloads per year and rapidly scale their customer base. They also significantly reduced the cost per rocket, down to just $5M, allowing them to charge customers less per payload.

Rocket Labs is not the only company vying to be the provider of choice for companies looking to launch small satellites. There are over 100 startups, including Richard Branson’s Virgin Orbit, looking to tackle this problem. Most of these companies, however, will fail due to a lack of proven technology or insufficient capital. How can Rocket Labs ensure long-term success?

On November 10, 2018, Rocket Labs successfully launched their first payload into space. While this is a major achievement, it is important that they do not become complacent. The 3D printed engines are a new technology and not enough time has passed to fully understand the effects of space on the materials. It is important that Rocket Labs continue to invest in R&D to improve the strength and durability of the lightweight engines. The company that ultimately provides the lowest cost launch solution to customers will succeed.

It would also be wise for Rocket Labs to continue to vertically integrate their manufacturing and launch processes at both their US and New Zealand launch facilities to further reduce costs. Finally, major defense companies are beginning to buy into these small startups rather than invest in their own in-house capabilities [7]. Rocket Labs must showcase its technology to these defense companies in order to lock in potential long-term contracts.

Questions for the Future

[2] Pixalytics, “How many satellites are orbiting the Earth in 2018?”, https://www.pixalytics.com/sats-orbiting-the-earth-2018/, accessed November 11.

[4] Stewart Sanders, “The new space race is all about satellites: Pros and cons of each orbit” The Next Web, November 3, 2018, https://thenextweb.com/contributors/2018/11/03/the-new-space-race-is-all-about-satellites-pros-and-cons-of-each-orbit/

Machine-learning in insurance is a sweet deal for customers

Student comments on Will additive manufacturing make space more accessible than ever before?