Climate scientists largely agree that the global climate is warming due to greenhouse gas (GHG) emissions.  There is also widespread consensus that emissions result primarily from burning oil, gas, and coal. I argue that the most devastating impacts of climate change will be associated with water, a vital resource for human survival.  Warming temperatures will result in less precipitation and melting glaciers, and by 2030 water demand is forecast to exceed water supply by 40% (Henderson et al. 2016). While reducing GHG emissions is quintessential to abating climate change and the oil and gas industry must fundamentally change (or cease to exist), it is unrealistic to think that this can happen overnight.  In the meantime, during my six-year career as an environmental impact consultant, I saw how Freeport-McMoRan Oil and Gas (FM O&G) is leading the industry in using innovative methods to mitigate the impacts of climate change on water resources while continuing to meet America’s energy thirst.

First let’s agree that the oil and gas industry is here to stay, at least for a few decades. In 2015, 80% of American energy use was derived from fossil fuels. The Energy Information Administration (EIA) estimates that renewable sources will only account for 12% of America’s energy needs by 2040 (API 2015). Nonetheless, in 2012 the U.S. became the first major industrialized nation to meet its target for CO2 emissions proposed in the Kyoto Protocol, a 1997 international climate agreement devised to curb climate change. The largest drop in the U.S.’s emissions came from transitioning electricity generation from coal to natural gas (EIA 2013). 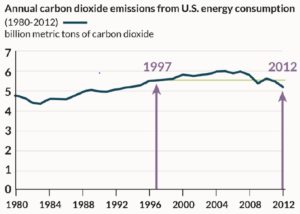 Along with hydraulic fracturing came water management challenges. Oil/gas production is referred to as a “skimming” operation because on average less than 10% of the liquid produced is oil/gas. The remainder is water.  Every hydraulically fractured well can produced up to 1,000 barrels of water per day, decreasing over time as the well matures (CH2MHill 2015). This is a huge amount of water that has traditionally been viewed as a waste by-product and disposed of.

During my career as an environmental consultant in California, I worked with Freeport-McMoRan Oil and Gas (FM O&G) to redefine oil field “waste” water as a new water source that can be used to help mitigate and adapt to the impacts that climate change is having on water supplies. California is currently in its fifth year of severe drought. The governor declared a drought state of emergency in 2014, and 2015 was the warmest year on record for California (USGS 2016). My team developed a simple four step process, outlined below, to identify how to beneficially reuse oil field waste water to mollify the drought strained region. 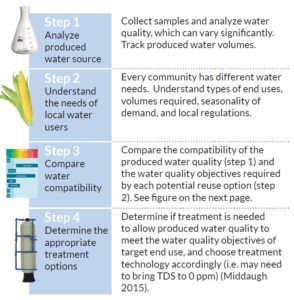 FM O&G’s Arroyo Grande Oil Field in the heart of California’s Central Valley wine region. My team interviewed local vintners and determined that they relied on groundwater for vineyard irrigation, but the groundwater aquifers were in overdraft. Demand was outstripping supply in the drought-strained system. We also identified that a stream running through the oil field, a critical habitat to the endangered steel-head species, was drying up because of the ongoing drought. By following the four-step process outlined above my team proposed treating the oil field “waste” water with a simple on-site system and recycling the water to replenish the local surface and groundwater resources (Middaugh et al. 2015) Following our recommendations, FM O&G is helping combat the local drought to the joy of the local vintners and steel-head.

It is obvious that to fully abate climate change oil and gas companies must revolutionize their business model as society transitions towards a more sustainable energy future (or they will cease to exist). In the meantime, FM O&G is innovatively proving that oil and water DO mix – oil field “waste” water can become an invaluable new water resource. In times of (climate change induced) water scarcity, wisely managing our water resources becomes critical, and the oil industry is helping lead the way.

Say it ain’t so, Chipotle: How climate change may harm guacamole at the burrito giant

Are partisan politics and crony capitalism to blame for the decline of the coal industry?