You might not have heard of Epic Systems, but their software has likely made it possible for you to get the treatment you needed if you’ve ever visited a CVS Minute Clinic, Kaiser Permanente, or large teaching hospital. Epic is the leading electronic medical record (EMR) provider in the U.S.–with 12.4% market share in 2016–in part because it was founded in 1979 before “digitization” was a business phenomena, and more recently because of wide scale health care reform that has invested over $20B in technologies to improve patient outcomes [1, 2]. Epic has continued to grow because of its ability to function in hospital and clinic settings alike, though its critics claim it lacks the dynamism and transparency needed to be a robust tool. This prompts the question; when can we move beyond praising digitization itself and begin to demand more from tech enabled products?

When operating models and the operating room don’t mix

As the first EMR, Epic’s software has become the “‘de facto standard among the more complex academic health centers and multispecialty medical groups,’ says Dr. John D. Halamka, chief information officer of Beth Israel Deaconess Medical Center and a professor at the Harvard Medical School. [3]” While traditional network effects rely on the market to link an increase in one stakeholder group–hospitals and clinics–to drive the increase in another–number of patients in the system–policy also played a huge role in Epic’s network growth. In order to meet the interoperability standards laid out by the Centers of Medicare and Medicaid Services, providers have been incentivized to adopt EMRs that enable secure transfer of patient data across traditional silos like points of care or networks, per the timeline below [4]:

What’s notable about this plan? It worked: from 2008 to 2014 the percentage of hospitals using digital records shot up from 9.4 to 75.5 [5]. To that end, hospitals and clinics alike have often found their hands tied to join Epic’s network in order to share patients with health care giants that can afford the system’s price tag.

Is digitizing enough to “do good?”

Though Epic prides itself on an operating model that focuses on attracting best in class talent and incorporating end-user feedback, those on the other side of the screen frequently share dissenting opinions. Further cementing that Epic’s value proposition is that users should only ever learn to use an Epic EMR, in 2008, 28 of the software giant’s competitors formed the CommonWell Health Alliance Partnership in order to promote interoperability amongst various providers [6]. Epic’s abstention signaled its focus on user acquisition so that information could be traded within the confines of its own records and not beyond; what’s more, Epic charges hospitals and clinics a fee to transfer limited information to non-Epic records and, prior to a 2014 Senate hearing, charged patients $2.35 per year to request access to their own medical record requests [7].

According to employees, Epic’s business model offers its users a comprehensive electronic platform to store, access, analyze, and transfer patient related data. The product, to them, is maximizing health care outcomes and inherently holistic and good in nature–just look at the heart related imagery they use to define their product [8]: 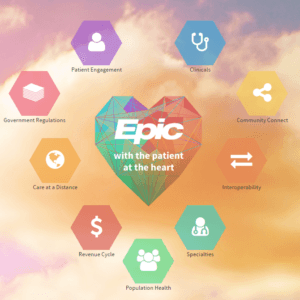 These same employees, however, are quick to share the business’s true operating model: “If you called up any of Epic’s almost 10,000 employees in the middle of the night and asked them the motto, they would recite without hesitation, ‘Do Good. Have Fun. Make Money.’ In that order,” says Peter DeVault, EPIC’s vice president of interoperability [9].

It’s no wonder then that Epic’s customers take issue with a software that is purported to provide value in the form of seamless information storage, analysis, and sharing but instead creates major road blocks that are counterproductive to a system reliant on patients seeing multiple doctors over their lifetime. In 2014, one physician told the New York Times “we’ve spent half a million dollars on an electronic health record system about three years ago, and I’m faxing all day long. I can’t send anything electronically over it,” while in 2015 another touted, “what you hear is that, if you were to buy the best of breed no one would ever choose Epic…but using Epic is easier than trying to piece together better options from various software vendors” [10]. In a world where health record digitization has become the norm, Epic’s value is its begrudging network rather than a sleek product. The firm must focus on its first mission–to do good–and recognize that digitizing records is not the benevolent service it once was. Epic must do more to enable interoperability and ease of use that will truly build a health care system that values patient outcomes through data sharing.

Student comments on When Epic Digitization is Not So Epic