Since the collapse in oil prices and subsequent oil industry downturn began in late 2014, onshore oil and gas exploration and production companies (“E&Ps”) in the United States have discovered that increasing the amount of water used to hydraulically fracture new oil wells improves oil recovery and investment returns.

For each new well, E&Ps procure water, mix it with sand and chemicals and then inject it “into the well at high pressures with the intention of creating small cracks in the rock formation of the well. The fissures allow gas and oil to escape from the well and rise to the surface” [1]. In the Permian Basin region of West Texas, which is one of the most prolific onshore oil basins, oil companies using more water has the potential to put pressure on local water supplies. “A combination of multiyear droughts, low groundwater levels and competition with the agriculture industry…means it is highly water stressed” [1][2]. According to data shown in the chart below cited by Barclays in a recent report and gathered by Digital H2O, an oil and gas water data company, the amount of water used per well in the Permian Basin has increased from ~60,000 barrels per well in 2013 to 300,000 barrels per well in 2016 [1]. 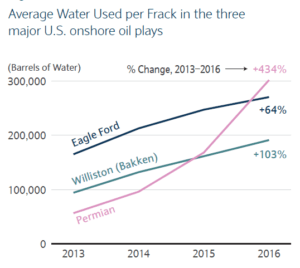 As one of the largest Permian-focused oil and gas companies, Pioneer Natural Resources has been proactive in its approach to fresh water supply concerns in the region and continues to set an example that other companies should follow. Not only will their constructive approach to the issue be critical to their long-term success operating in the region as a member of the local community but will also allow them to continue attracting capital as institutional investors become increasingly focused on environmental responsibility metrics.

Pioneer Natural Resources (“Pioneer”) is an oil and gas exploration and production (“E&P”) company focused predominantly developing assets in the Permian Basin region of West Texas. In an effort to address the concerns of residents and regulators concerned about local fresh water supplies, the company, through its subsidiary Pioneer Water Management LLC, has focused on securing “supplies of non-potable, non-fresh water”, including “effluent (waste) water, brackish water and recycled produced water” [4].

To minimize the use of fresh water in the short-term, the company has invested in the development of brackish water resources across their acreage and designed their hydraulic fracturing chemistry to allow for the use of brackish water in their operations [4]. While these efforts have resulted in the avoidance of potable water in the company’s operations, the company has taken actions to address this concern over the medium-term as well such as executing agreements with local municipalities to purchase wastewater treatment plant effluent and use it in their operations [3][6]. Recently, Pioneer reached an agreement with the City of Midland, Texas under which the company would fund upgrades to the City’s water infrastructure in exchange for the right to purchase up to 2 billion barrels of wastewater from the City’s treatment system over the next 28 years for $.029 per barrel [1].

While the use of brackish water and effluent from municipal wastewater systems are steps in the right direction, Pioneer needs to continue focusing on developing water reuse technology and infrastructure as highlighted in the company’s 3Q2017 investor presentation [5]. By focusing internal resources on developing the company’s reuse capabilities, Pioneer not only will eliminate the need to source any incremental water, alleviating pressure on local supplies, but should also be able to further reduce operating expenses. According to research from Barclays and the Columbia Water Center shown in the chart below, reused water is the cheapest source in the Permian Basin at $0.27 per barrel [1][2]. 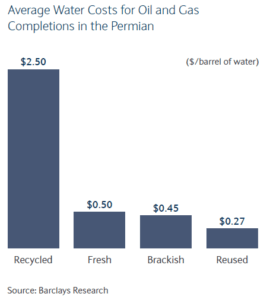 In addition to advancing reuse internally, Pioneer should also form a coalition of industry stakeholders to fund water recycling (taking water to fresh water standards vs. hydraulic fracturing reuse standards) technology research in an effort to lower the cost and promote full recycling across the industry.

Over the last few years, Pioneer has proven its commitment to preserving the water resources of West Texas. However, the company must continue not only to reduce and eventually eliminate the use of fresh water across its operations but also facilitate other companies in the industry to do so.

There are many questions that remain in the industry related to water usage. For example, is it possible for Pioneer to fully eliminate the use of fresh water given their growth plans? Additionally, will water recycling, which would allow for water generated from oil and gas activities to be used in other industries such as agriculture, ever become economical?

Made-To-Order: Can Zara Make the Shift to True Mass Customization?