Taiwan is one of the first democracies in the world to leverage crowdsourcing technology to improve policy and decision making around internet and technology companies. While things like participatory democracy have been increasing, Taiwan has taken a more private sector approach to arriving at a piece of legislation, a government’s product [1]. Through vTaiwan, the government allows citizens to solve legislative problems ranging from online alcohol sales to Uber, in a way that improves citizen engagement and requires consensus.

Necessity is the Mother of Invention: Taiwan and the Flower Revolution

As a young democracy, transparency and participation has become increasingly important for Taiwan. The country came out of Martial Law in 1987 with an unstable democracy which ultimately led to the Sunflower Movement in 2014. Citizens protested the Cross-Straight Service Trade Agreement because they felt the agreement was going to leave the country vulnerable to China’s influence [2]. In response, the government created vTaiwan in 2015—a crowdsourcing process to improve legislative outcomes for its citizens or customers. The more people involved in the legislative process, the more likely the government will arrive at the “right solution”—an idea that is fundamental to the crowdsourcing companies engage in across the globe.

Taiwan Pushes Past Other Governments

While the private sector has been using crowdsourcing to solve technical problems, and generate and get customer feedback on new products, this approach is novel in the public sector [3]. Governments—primarily at the city level—have engaged in participatory budgeting, which allows citizens to have direct control over the budget of certain government projects, but few other governments have done that on the level of thousands of people, engaging them using a combination of an internet platform and in person meetings as opposed to solving technical issues [4]. This process is most like the crowdsourcing Wikipedia requires, in that it takes the collaborative community approach to crowdsourcing [5].

1.      Stage 1: Proposal Stage—The government or the country’s citizens propose a problem that requires a legislative solution.

2.      Stage 2: Opinion Stage—Crowdsources feedback to find a resolution to the issue presented.

3.      Stage 3: Reflection—All stakeholders discuss the outcomes of the feedback, find commonalities, and come to a consensus on legislation. 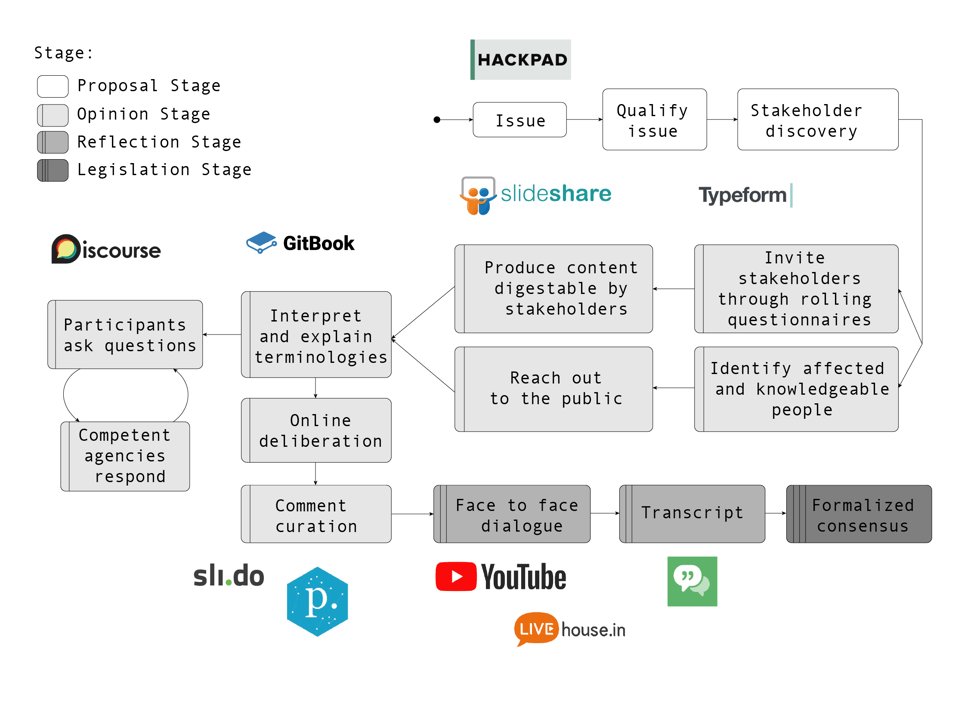 vTaiwan and the Case of Legislating Uber

Taiwan regulated Uber using vTaiwan. While the Taiwanese government viewed Uber as a transportation company subject to taxi laws, the company viewed itself as technology company that required fewer regulations [8]. Taiwan turned to its citizens to resolve this issue. Using Pol.is, the government broadcast out a survey to all stakeholders and their responses were divided into opinion groups (Uber vs non-Uber), where citizens vote on statements so legislators can identify consensus [10]. Four weeks later, the group made recommendations around topics of registration and platform usage. A two-hour livestream took place with input from industry experts. Finally, the consensus driven recommendations became law [7].

Originally, the Taiwanese government was hesitant to expand vTaiwan beyond technology issues. More recently, however, the Premier would like to use this at a much larger scale and for a wider variety of topics. The government will continue to invest in training for local level officials so that the crowdsourcing process and technology can spread across the country. Additionally, in the long-term the vTaiwan team is focused on “mixed-reality” meetings that allow technology to bring rural residents into the conversation [9].

In the short term, vTaiwan administrators should focus on expanding the number of individuals engaging with the crowdsourcing software. In the case of Uber, only 31,115 people cast a vote on the proposed legislation [8]. Investing in marketing may lead to higher engagement. Additionally, the government should think critically about the role of experts in their crowdsourcing process. While citizens can determine how they think a certain industry should be regulated, a crowdsourced validation process should also be incorporated.

In the long term, the Taiwanese government should also focus on reducing the amount of time to reach a resolution. Currently, it takes months to run through a vTaiwan process, increasing the barrier to entry of participation. Additionally, crowdsourcing feedback and information about the social services citizens need or improvements to currently existing ones could be an incredibly powerful. Finally, the government should also formalize the use of crowdsourcing through legislation that will last beyond political regimes.

Can trends like machine learning and data collection make this process more efficient and predictive? And can the government take it easy to participate in this process?

[4] Cristin Dorgelo and Brian Forde, “By the People, for the People: Crowdsourcing to Improve Government”, Wired, 2018, https://www.wired.com/insights/2014/04/people-people-crowdsourcing-improve-government/, accessed Nov 2018

Soaring to new heights with additive manufacturing at GE Aviation

12 thoughts on “vTaiwan: Crowdsourcing Legislation in Technology and Beyond”