When it was founded in 2009, British cycling team Team Sky had a straightforward goal: within five years, create the first British winner of the Tour de France.  In 2012, Team Sky’s own Bradley Wiggins was crowned the champion of the famous race, and teammate Chris Froome went on to win an additional three titles for the team in 2013, 2015, and 2016.  This winning streak has been lucrative for Team Sky’s sponsors – the team created an estimated $550 million in advertising value over the course of the 2015 season for popular brands like Ford, 21st Century Fox, and machined parts specialist Shimano (1).  In short, its winning recipe has made Team Sky the highest-value professional cycling team in the world – and the team has embraced data analysis and the Internet of Things to maintain its edge.

Cycling is a demanding sport.  Professionals training for prestigious races like the Tour de France spend at least 30 hours per week “in the saddle” for training rides, and they burn a huge amount of energy.  Over the course of a competitive Tour, a rider can burn 700-900 calories per hour, and when resting metabolism is factored in a cyclist requires 5000-7000 calories per day (2)(3).  Dave Brailsford joined Team Sky in 2010 as its director after winning 8 gold medals with British Cycling in the 2008 Olympics, and he understands that at this high level riders must squeeze out every ounce of power and performance to win races (4).  Cycling races are often won by a bicycle length or two, and Brailsford, along with Team Sky’s dedicated data scientist Robby Ketchell, have employed an operating model they call “Marginal Gains 2.0,” which employs wearable sensors and intense data analysis to continuously improve the performance of riders on the team.

Earlier in his career, Ketchell developed an application called Platypus to analyze rider performance in real time.  Most professional riders today are equipped on their bikes with wireless GPS, accelerometers, and power meters (which calculate rider power output, see Figure 1), and Platypus was used to aggregate team performance to make strategic decisions against a given course and terrain.  With Team Sky, Ketchell has taken the next step forward – course analysis is now the status quo, and real-time performance data from the team is constantly analyzed to tell riders when to attack to try to gain a lead position, or to set goals for completion of a particular climbing section (5).  Today, Team Sky’s cars communicate consistently with the team wirelessly based on inputs from their performance sensors. 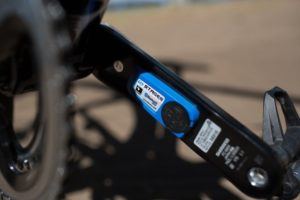 This analysis, however, is only the beginning for Team Sky.  Brailsford continues to work consistently with Silicon Valley startups to try out the next technology that will help the team achieve the next marginal gain.  One such technology the team has employed involves sensors, worn against the skin during training rides, that can provide continuous monitoring of the response of specific rider muscle groups (6).  The data can be analyzed in real time to determine any imbalances in muscle performance that may reveal an oncoming injury, and training can be adjusted accordingly to compensate.  Additionally, sleep – vital to rider recovery – is monitored by the whole team with the use of wearable devices that measure REM sleep.  If a rider has some difficulty achieving this deep and healing sleep, the team can target selected relaxation techniques to assist (7).

As for further specifics, Team Sky is careful about what information they release to the public, but Brailsford has positioned his team as Silicon Valley’s “willing guinea pigs” for new technologies.  One area of active research is on tracking how much a rider sweats.  Real-time analysis of perspiration data can provide race-day insights: certain riders may, for example, need a drink with extra electrolytes at certain times to maintain muscle performance (8)(9).  Start-up BSX Insight (Figure 2) has created sleeves that can provide information on muscle oxygen content and lactic acid buildup.  This information, previously only available via a blood test, could be invaluable in designing rider training plans (10). 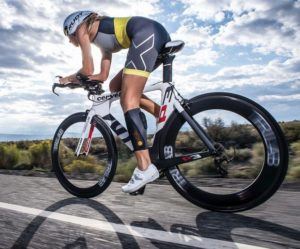 With another victory in the latest Tour de France under their belts, “Marginal Gains 2.0” is bearing fruit, but the use of data is hardly exclusive to Team Sky.  Brailsford and Ketchell must continue their close collaboration with up-and-coming tech to maintain their riders’ edge, and while their experimental spirit is commendable they cannot rest.  Furthermore, the team must stay abreast of the latest cycling regulations – with repeated doping scandals, performance improvements are under scrutiny and Brailsford cannot jeopardize the team’s success with a questionable sensor or training plan.  Overall, data analysis is here to stay in the world of cycling as teams vie to extract every bit of performance in search of victory.

The Shazam of Fashion