As the facts about climate change have become increasingly undeniable, companies from a variety of industries have begun to change their operations to adjust this new reality. Some industries have been affected more than others, but what happens when your business purely dependent on the weather for 7 months of the year? That’s the mountainous challenge that Vail Resorts, Inc. currently faces.

The Birth of a Winter Sport Superpower

Over the last six years, Vail Resorts has been extremely active in building its resort portfolio through M&A activity. Starting with the acquisition of Northstar-at-Tahoe in 2012 [1], Vail Resorts proceeded to acquire Kirkwood [2], Afton Alps, Mount Brighton [3], Canyons Resort [4], Park City Mountain Resort [5], Perisher Ski Resort [6], Wilmot Mountain [7], and capped it off with the recent acquisition of Whistler Blackcomb [8]. Through these acquisitions, Vail Resorts has positioned itself as the largest mountain resort ownership group in the United States [9].

During this period of rapid expansion, Vail has boosted its revenues from $1.02B in FY12 to $1.6B FY16 but it has not been limited to topline growth. The resort conglomerate has paired its impressive growth with its margins that increased from 1.61% to 9.35% during the same period [10].

Growing Cause for Concern

Despite these encouraging numbers, Vail Resorts still has cause for concern. Lake Tahoe’s ski area houses three of Vail Resorts’ larger mountains (Northstar-at-Tahoe, Kirkwood, and Heavenly) which have seen the dramatic effects of climate change on both the on both the amount of total snowfall (Figure 1) and their average base depth of snow over the course of the season (Figure 2). As can be seen in Exhibit 1, Heavenly, Northstar-at-Tahoe, and Kirwood have seen decreases in total snowfall of 39%, 13%, and 50% respectively from 2011 to 2015. 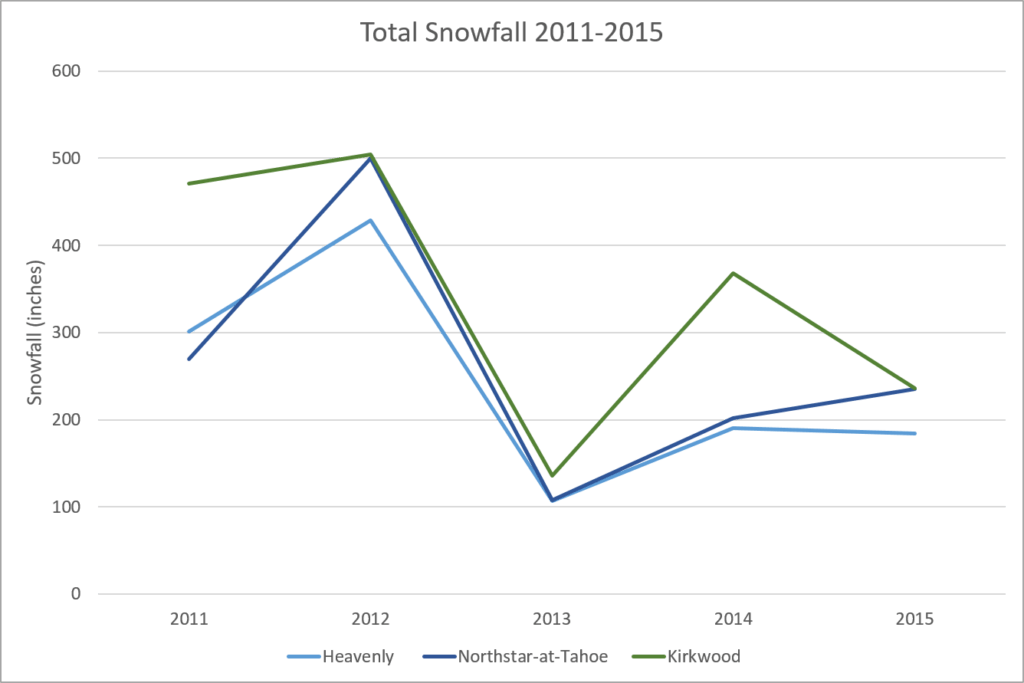 What may be an even more worrisome measure of the mountains’ suitability for skiing and snowboarding is the percent decrease in average base depth. These three resorts all showed a decrease of greater than 50% during this same time period [11]. Even in years like 2014 where total snowfall saw an increase across the board, the average base depth was still drastically lower than 2011. This signals that even if there are large amounts of snowfall, the temperature on the mountain isn’t staying cold enough for the snow to stick and it is simply melting away. 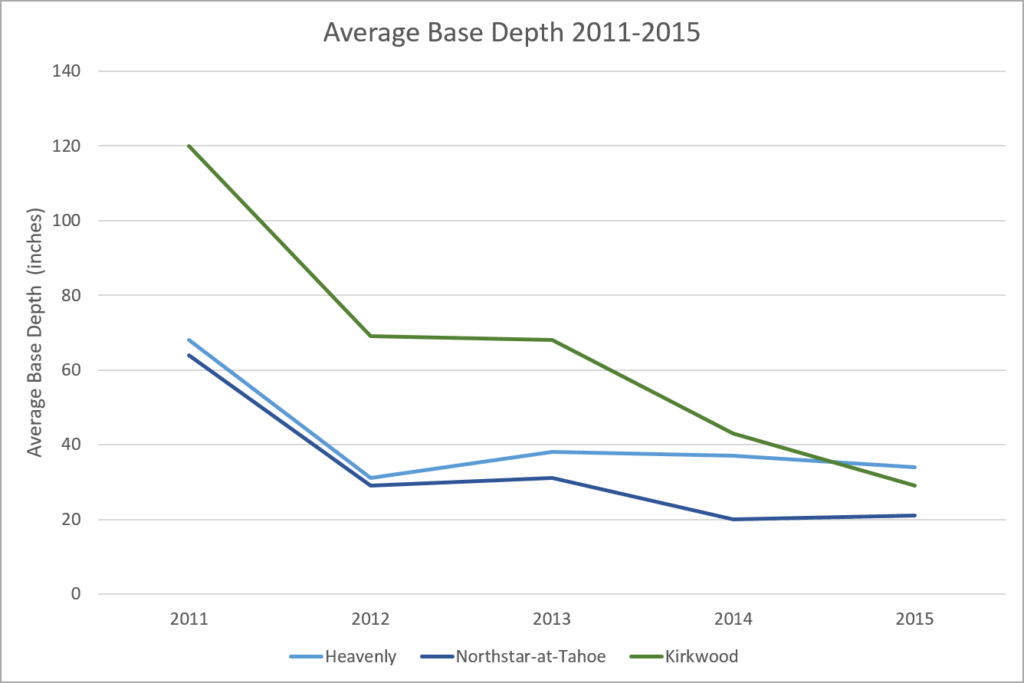 In addition to poor weather conditions, data shows that the number of snow resort visitors nationally has been decreasing since the 2010/2011 season, the same period where we have observed major climate change effects at the three mountains referenced above. While not all winter resorts have been impacted by the effect of climate change, these three resorts are emblematic of the problem that Vail Resorts is currently facing. This is clearly supported by the below data that shows after an all-time high in snowsport visitors in 2010/2011, visitors have fallen by 12.8% [12]. With guests being the lifeblood of a resort’s revenue, it’s critical that Vail Resorts take action to mitigate climate change to ensure continued success. 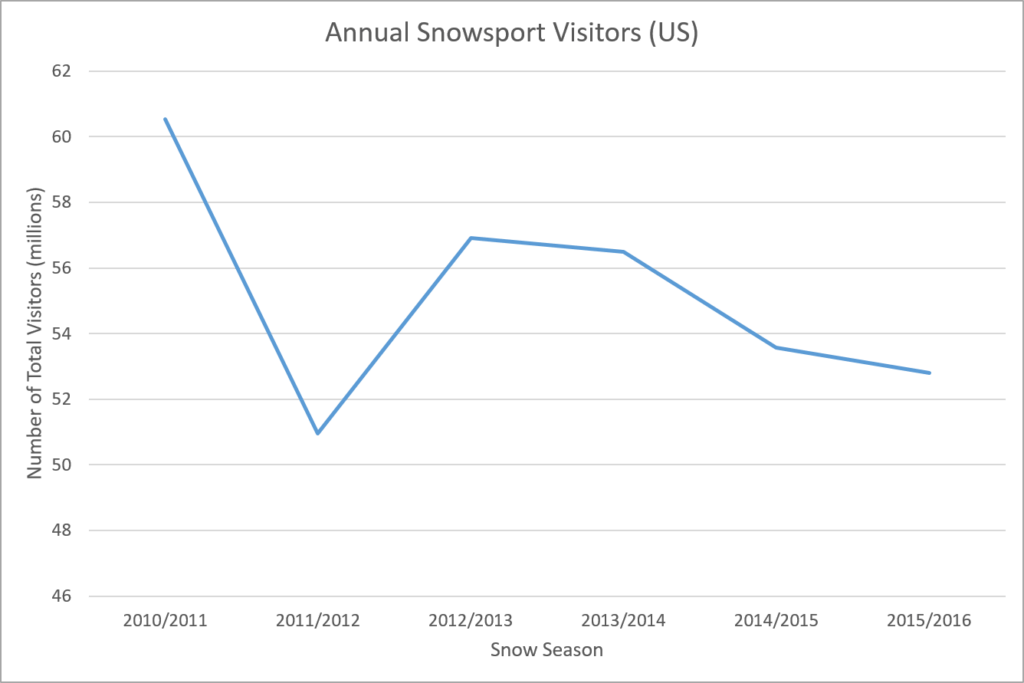 The Path to More Powder

Unsurprisingly, Vail Resorts is acutely aware of the problems that climate change poses for their business and has already begun making a concerted effort to become a more sustainable, eco-friendly collection of resorts. Between 2008 and 2011 Vail Resorts reduced their energy consumption by 10% and are targeting another 10% decrease by 2020. Additionally, the company has piloted a GPS system to monitor the efficiency of its snowcats (machines used to groom the mountain) to reduce the amount of fossil fuels used per acre of the mountain that is groomed [13].

One of Vail Resorts’ biggest rivals is Squaw Valley, another premier resort in the Lake Tahoe area. Despite their jockeying for position as Tahoe’s top destinations, Vail Resorts would be well served to implement some of the changes Squaw has put in action recently. Earlier this year, Squaw announced that it would be implementing a designated parking area for visitors who carpool to the mountain. Not only does this have the potential to save over 85,000 gallons of gas this upcoming season, it also makes logistics easier on the Squaw staff by reducing up to 657 vehicles from the road per day [14]. Squaw has also partnered with Tesla to implement a microgrid system at the resort for energy generation and storage that is projected to reduce energy consumption 30-60% [15].

Vail Resorts has a long road ahead of it but with sustainability implementation already in place and other models of improvement paving the path towards a smaller carbon footprint, the company can do its part to combat climate change and keep people skiing. [Word Count: 793]