Climate Change and Insurance
Hurricane Matthew, California wildfires, and Hurricane Sandy are only a few of the many devastating catastrophes to have struck the U.S. in the past several years. In just the first eight months of 2016, there have already been 31 disasters reported to the Federal Emergency Management Agency [1]. The trend is the same across the globe; the number of natural disasters has risen over the past several decades. 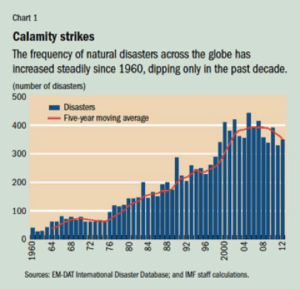 In the aftermath of these events, characterized more frequently by severe damage and loss, collecting on insurance claims offer survivors one of the few means of recompense [2]. This has put the traditional insurance model at risk, particularly insurance companies like AXA who have property and casualty (P&C) divisions, because they must pay out more claims. In 2014, AXA reported that they paid over $1.1 billion in just “weather-related insurance claims,” and they believe it will only increase over time [3].

Insurers operate based on the assessment and assumption of risk so, as the likelihood of catastrophic events rises and climate change becomes more unpredictable, they must raise premiums to hedge against potential natural disasters. However, as premiums rise, fewer customers are able to pay – also a significant problem in the long-term [3]. A company like AXA is also typically exposed to climate change through their investment portfolios. Since their portfolio included some investment in fossil fuels, they are also at risk from falling prices and rising greenhouse emissions regulation [1].

AXA’s Approach
Of the many insurers impacted by climate change, AXA has distinguished itself as an industry leader by taking action early, relative to their peers [1]. One of the first steps they took was to address the investment exposure. In May 2015, AXA announced that they would sell off €500 million of fossil fuel investments, which they defined as mining and electrical utilities companies that generate over 50% of their revenue from “coal-related activities” [4]. In addition, they also committed to increasing “green investments” three-fold to €3 billion over the next five years. [5]. AXA was the first global investor to have divested a “fossil fuel asset,” and several others followed quickly afterward, including SCOR and Allianz in November 2015 [1].

It was a smart move for AXA to establish themselves early on as the environmentally-conscious leader. Not only did it reflect positively on them from a public relations standpoint, but they also recognized the imminent risks of holding onto these investments. Investors are increasingly wary of carbon-intensive investments due to heightened concerns surrounding carbon asset risk (“the notion that a significant portion of the world’s fossil fuel assets will remain unburned and thus will be stranded”) and regulation (Paris Agreement) so the monetary value of these investments are also suffering [1].

Beyond the divestment, AXA is working to raise awareness and to promote action. In October 2015, they commissioned a study to evaluate how cities and businesses are preparing together for climate change [6]. AXA also participated in the Task Force on Climate-related Financial Disclosures (TCFD), assembled by the Financial Stability Board, to “[deliver] specific recommendations for voluntary disclosure principles and leading practices” [1].

For the Future
Though the divestment and studies are important steps, AXA can do much more in order to address the threats to their core business.

The first step is to partner externally to improve risk modeling. Insurers typically build their predictions off of historical data, however, it is clear from Exhibit 1 that weather trends are evolving in unpredictable ways. To prepare, it will be critical for insurance companies to refine their risk models by collaborating with climate change subject matter experts and data scientists. If AXA can more accurately predict future weather events into their models, they can also more accurately predict the amount of claims they will need to pay out and can adjust premiums accordingly [7].

However, to avoid hiking premiums to a level at which customers can’t pay, AXA will need to ensure that people are prepared for the effects of climate change. They should partner with policymakers and non-profits, like Red Cross, to educate and prepare communities for natural disasters. This can be a proactive step in reducing the number of people who file for claims and offer improved awareness of the AXA brand [8].

Henri de Castries, CEO of AXA, summarized the problems facing insurers: “Climate risk for us is neither an ideological or theoretical issue. It is a core business issue, as we are already seeing the impact of increasing weather-related disaster risks.” [3]

Climate Change: Edging the UK towards its last letter?

Apple: Climate change is real, and time for action is now