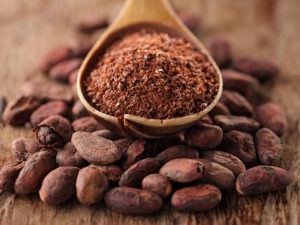 More than the quintessential comfort food, chocolate drives a $102 billion global industry [1]. On Valentine’s Day 2015, Americans alone spent $1.7 billion on the sweet treat [2]. Consumer demand is expected to rise 30% by 2020, fueled by developing countries such as China and India [3]. But can the supply of cocoa – the key ingredient in chocolate – keep up in the face of climate change?

Cacao trees thrive in a specific, limited geography which confines production to 20° north and south of the equator [4].  As of 2016, the Ivory Coast and Ghana together produce nearly 70% of the world’s cocoa [5].  However, as climate change increases temperatures in those areas (without sufficient rainfall to offset evaporation), a change in only 1-2°C could shrink suitable regions considerably [4]. Due to global warming, these effects are expected to be observed between 2030 and 2050 [4]. 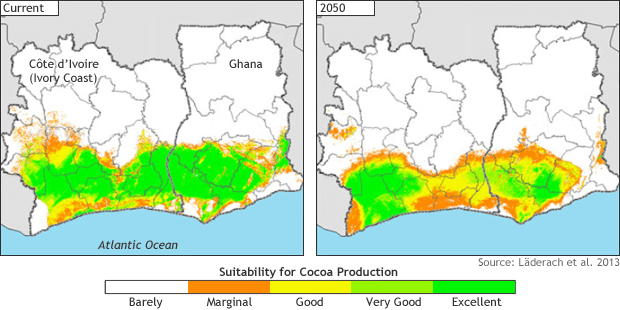 With FY15 net confectionery sales of $18.4 million, Mars Inc. is a global leader in the candy industry [7]. As the largest buyer of cocoa in the world, the company is acutely aware of the threat posed by climate change, especially in West Africa. In addition to being vocal in campaigns to combat global warming, Mars is pursuing two strategies to protect its raw material sourcing.

First, the company is diversifying its supply base and expanding into other promising localities, such as Latin America. In April 2016, the company acquired Hacienda La Chola, a 485-hectare cocoa farm in Guayaquil, Ecuador, signaling a diversification away from its historical supply base. Known for its technological innovation and irrigation systems, the purchase expands the company’s research and best-practices deployment base in the region [8].

Second, Mars has taken an active role in supporting its supply chain. Farmers in West Africa receive just 3.5% to 6.4% of the price consumers pay for a candy bar, a 16% decrease since the 1980’s [3]. Coupled with other difficulties of farming – such as long growth cycles of cacao trees (5 years to maturity) and high susceptibility to disease ($750 million in damages per year) – growers face low productivity and poverty [1]. As value continues to be squeezed from the supply chain, many growers are abandoning the industry. With the average age of growers at 51, sustainability is in serious question. In fact, pressure upon the industry is so great that Ghanaian and Ivorian leaders are calling for an “OPEC for Chocolate” to maintain a larger piece of the pie. By investing in local processing, they have the potential to change the game for manufacturers such as Mars [5].

In 2009, Mars committed to sourcing 100% sustainable cocoa by 2020, meaning farms from which they source would meet certain environmental and social standards and practices. Certified farms would ensure a level of quality, and farmers would be paid a premium over non-certified growers.  In addition, Mars instituted Cocoa Development Centers to provide fertilizer, training, international donor agency support and research into variants that better withstand temperature changes, pests or disease [9].

Mars also intends to reduce its own greenhouse gas emissions. The company plans to be carbon neutral by 2040, and reduced carbon emissions by 25% between 2007 and 2015 [10]. In addition to individual effort, Mars united with 14 other food corporations, including competitors such as Hershey’s and Nestlé, to address the issue at scale. In November 2015, the group released a letter appealing to world leaders for accelerated regulatory action [9]. A month later, at the Nations Framework Convention on Climate Change, 195 countries agreed on efforts to limit global temperature rise below 2°C [11].

Role of Science and Recommendations for Mars

Where regulations may rein in the effects of climate change, science has the potential to help cacao trees survive in a new normal. Mars has organized networks of breeders to discover in the genome resistance to disease, efficient water and nutrient use, and adaptability to changing weather conditions. The difficulty lies in preserving the quality of cocoa produced by disease-resistant variants, as “natural hybrids” have delivered poor-tasting cocoa [2]. Other efforts are underway to create shorter, more drought-tolerant trees that require fewer resources [2]. Yet, regardless of how efficient cultivars become, successfully increasing yields may involve more structural improvements, such as improved irrigation systems and fertilizer distribution [2]. Mars should continue investing in research and best practice deployment, scaling the effort against climate change, and supporting the supply chain from a social and business standpoint. Ultimately, the future of chocolate in response to climate change relies on a triangulation of efforts from the public and private sectors, scientific and academic circles, and infrastructure improvements within local communities. (794)

[3] Goodyear, Dave. “The Future of Chocolate: Why Cocoa Production is at Risk.” https://www.theguardian.com/sustainable-business/fairtrade-partner-zone/chocolate-cocoa-production-risk. Accessed November 2016.