When you log onto the NextEra Energy, Inc. website, the company proudly declares itself a “leading clean energy company.” However, at this stage, this may be more of an aspirational statement than a veritable one. While they are on an admirable trajectory, more steps could be taken to make them a leader in clean energy and climate change recognition and remediation.

NextEra Energy Inc. is the result of a 2010 rebranding and re-organization of Florida Power and Light Group and is still comprised of two major subsidiaries:

Given both their location and their line of business, NextEra is a clear example of an organization that will be affected by the both physical manifestations, as well as regulations surrounding climate change.

The FP&L business is where NextEra’s claim to be a clean energy leader is most debatable and also where NextEra faces the greatest negative impacts from climate change. The FP&L generation fleet consists of ~25,000 MW of electricity generating capacity, of which nearly 22,000 MW are fossil fuel (primarily natural gas) while renewable energy made up less than 1%. In spite of this, their CO2 emissions are 35% lower than the U.S. power industry average.[iii] 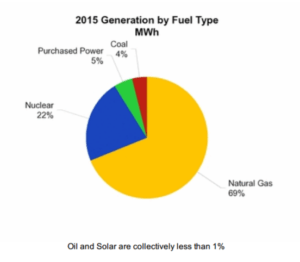 It is very likely that federal or state regulations to reduce emissions intensity will begin to impact the operations of FP&L. NextEra admirably submitted a brief in favor of the Clean Power Plan (CPP).[iv] While this legislation is currently held up by a Supreme Court stay, if approved, the state of Florida would be required to reduce its CO2 emissions intensity by about 22% from status quo between 2020 and 2030 (made up in large part by FP&L reductions).[v] However, studies have shown that Florida would be able to do this without any impact on electricity rates through increases in energy efficiency and renewable energy.[vi] While FP&L is actively undertaking some CO2 reduction strategies, such as purchasing and retiring old coal plants,[vii] more should be done to improve efficiency and roll out clean energy within their own territory, regardless of the outcome of the CPP.

FP&L’s service territory covers the majority of the east coast of Florida, as can be seen in the figure below. This is an area historically prone to extreme weather events, and the severity of these events is likely to become worse through the impacts of climate change. This is very likely to cause FP&L to incur significant additional costs for grid repair in addition to improving grid resiliency either voluntarily or as mandated by regulators (though many of these costs will be passed through to ratepayers). In the much longer term, if sufficient action is not taken, sea level rise presents an existential threat to FP&L, particularly due to their footprint. While their annual report discloses both of these risks, they are nestled neatly in one paragraph within 10 pages of risks[viii], and an effort to increase NextEra’s disclosures around sea level rise in particular was defeated at the most recent annual meeting.[ix] 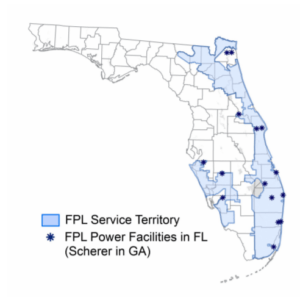 NEER, on the other hand, is where NextEra does live up to its clean energy claims. With 21,000 MW of generating assets in 27 states and three countries, only 23% of these come from fossil fuel systems, and this number is trending downwards.[x] With NEER, NextEra has opportunistically taken advantage of federal and state policies and regulations designed to change the US generation mix away from carbon-based fuels and increase the proliferation of renewables. Given their profitability from both business units, they are able to monetize the federal wind and solar tax credits, increasing their competitiveness as an energy developer and further supporting their bottom line.

As a key player in the electricity sector and one whose operations are seriously at risk of the physical effects of climate change, NextEra, and particularly FP&L, should increase their disclosures and become a louder advocate for regulations surrounding climate change. This will not only de-risk their business and support their operations, but support their claims of being a leading clean energy company.

Honeywell: Advancing the Global Effort to Phase Down HFCs

Student comments on The Next Era for NextEra Energy: Dealing with Climate Change as an Energy Company