The newspaper industry has been impacted dramatically by the rise of digital technologies [1].  The business model employed by traditional newspaper companies enjoyed decades of success.  However, changing consumer preferences and the availability of free digital news via online and mobile platforms has shaken that business model to its core.  As evidence, see Figure 1 below which shows the degree to which industry-wide U.S. print newspaper revenues have decreased every year since 2005 [2].  The New York Times is one of the many companies that has had its existence threatened by this digitization of the industry. 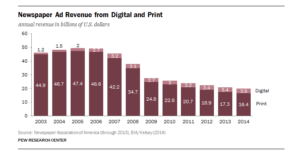 The New York Times has taken several actions to respond to threats posed by news digitization.  The first key step has been migrating their content online and creating a NY Times app so that their readers can access content from anywhere [3].  While the most critical component was making new articles available on these digital platforms, the NY Times invested significant time and resources into making nearly all their historical articles available digitally as well [4].  This step increased the overall value proposition of their digital offering.  The next major task was to monetize their digital product.  In 2011, NY Times began charging readers for an online subscription if they desired to read more than 20 articles per month [5].  That monthly limit has since been reduced to 10 articles in an attempt to increase the number of subscribers [6].  To their credit, the NY Times has also expanded their scope beyond written content.  Specifically, they’ve created several podcasts intended to attract new, younger consumers to their brand [7].  These podcasts are free for listeners but generate advertising revenue [7].

The NY Times had to alter their own culture to effectively adapt their product offerings and meet changing customer expectations [8].  For a 164-year-old company, organizational change can be particularly difficult.  First off, they had to embrace a culture of experimentation and acceptance of failure to allow for innovative new ideas to thrive [8].  Second, the company has had to shift from a work environment that was traditionally siloed by department to one that involves a ton of cross-functional collaboration [8].  For example, the production of smartphone apps requires teamwork between employees who focus on technology, marketing, content creation, etc.  Finally, they had to reassess some of their content production goals to best fit the consumption habits of digital news readers.  Per editor Clifford Levy, this involved shifting from their traditional mindset of seeking the best possible investigative story to thinking about how they can provide the type of digestible content that can improve their readers lives in the limited amount of time which readers devote to news each day [8].  These changes have resulted in financial performance which has at least kept pace with the limited expectations for the industry [9].  In the third quarter of 2016 total revenue was just 1% below that of 2015 and the number of digital subscribers increased by 116,000 from the prior quarter [9].

Overall, the New York Times has done an impressive job of remaining relevant despite the transition to digital news.  One area in which they could improve is more effectively using customer data to convert free-loading readers to paying customers.  In their current model, once a reader reaches the monthly article limit their only option to continue reading is a subscription [10].  For many young readers, I’d imagine that the shift from paying nothing for news to making a recurring monthly payment is too big of a leap for them to stomach.  After all, millennial consumers have been trained over time to expect online information to be free.  To address this issue, I suggest NY Times use their data to identify readers who may need to be weaned into the paying model more gently.  Specifically, I would identify all readers who have attempted to read an 11th article (and thus been informed that they must subscribe to continue reading) in each of the past two months but have chosen not to subscribe.  When those readers hit their 11th article the following month, I would offer them the ability to pay 10 cents to read just that single article.  Given that the expense is tiny and non-recurring, some of these customers are likely to find it more palatable than a subscription.  I would allow them to pay on a per article basis for 2-3 months.  In subsequent months, they would be offered only the subscription option after hitting the monthly article limit.  My expectation is that some of them would find the transition to a subscription payment more tolerable after having previously demonstrated to themselves that they are indeed willing to pay SOMETHING for this service.  There are many potential ways to tweak this strategy, but the general idea of using data to identify ways in which to treat different customers differently could have a significant positive impact.  (798 words)

Here’s How to Buy Anything from Anywhere (Without Shipping Costs!)