Saint-Gobain is a $42B revenue French multinational corporation that develops, produces, and distributes glass, polymer, and ceramic materials. Its product portfolio can be divided into three families: Flat glass (for buildings and cars), High-Performance Materials (plastics, ceramics, and textiles), and Construction Product (pipes, acoustic and thermal insulation, roofing, flooring, and wall facing solutions). Adding to this portfolio an activity of building material distribution and you get an organization whose economic prospects will be unavoidably impacted by climate change. First and foremost, the main market Saint-Gobain operates in (building materials) has been increasingly concerned with energy efficiency since the first oil crisis in 1973 [1]. Over the past 20 years, this trend has been accelerating and is likely to keep doing so in the coming decades. Second, the production of glass and ceramic, two major businesses for Saint-Gobain, require substantial amounts of energy, whose consumption can only be optimized so much. Finally, Saint-Gobain relies on the supply of raw materials such as clean water, sand, and minerals to manufacture its products, whose extraction and distribution might be impacted by climate change in the long run.

What is Saint-Gobain doing?

1. Staying aligned with and being active about global actions against climate change

Generally speaking, Saint-Gobain focuses its strategy on sustainable construction [2] and is always trying to penetrate new markets based on sustainability [3]. Besides, it is among the 1,200 non-state actors that signed the Paris Pledge for Action on Climate Change. Being an active member of environmentally friendly networks and quickly integrating sustainable recommendations into its strategy enables Saint-Gobain to anticipate major trends and regulations that pertain to climate change.

2. Monitoring and communicating its impact on the environment

Saint-Gobain closely monitors and publicly communicates at the group level key environmental metrics such as energy consumption, raw material and production waste, GHG emissions, and water consumption and discharge. It also performed a comprehensive and rigorous Life Cycle Assessment on most of its products and solutions to gauge the impact over time of its sustainable measures on the company’s footprint.

Besides targeting the market of energy-efficient building materials and keeping track of its environmental footprint, Saint-Gobain proactively sets ambitious goals for itself. For example, a new internal carbon pricing strategy was implemented on January 1, 2016 to achieve the goal of reducing its carbon emissions by a factor of 4 by 2040, compared to its 2010 level.

What other steps can Saint-Gobain take?

One aspect of its supply chain that Saint-Gobain seems to have overlooked so far relates to its manufacturing base. Saint-Gobain operates hundreds of production plants all over the world. We show in figure 1 the example of North America with its 138 Saint-Gobain plants. 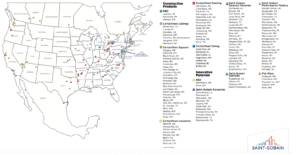 By the nature of the products they manufacture, some of these plants consume a substantial amount of energy, which creates a major risk for the company. Figure 2 is a snapshot of the process used by Saint-Gobain to produce flat glass. 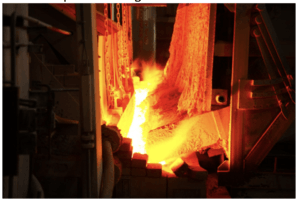 Figure 2: Snapshot of the float process for the production of flat glass

To address this concern, Saint-Gobain should invest in renewable energy capacity to hedge against the risk of energy becoming the main cost driver for its products. In the short term, the company should prioritize the plants to be supplied with clean energy based on the following criteria: 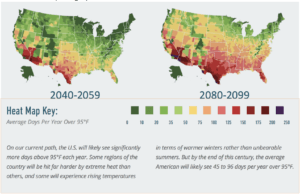 Figure 4: Map of North America for a sea level rise of 3 feet compared to the current sea level [7]

Currently, in the US, Saint-Gobain owns about 20 plants in these vulnerable areas. Hence, the company should proactively evaluate the risk of maintaining some of its manufacturing base near coasts.

In the same vein, it would be interesting to study the impact of sea level rise on the supply of raw material that Saint-Gobain uses for their products such as minerals and rare-earth.

Made in America? Ford Motor Company’s Battles with Isolationism