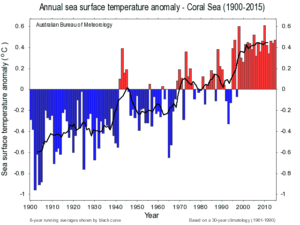 Coral bleaching occurs when water temperatures rise above 88 Fahrenheit for extended periods of time, causing the coral to expel the algae living on its surface, eventually leading to death of the coral polyp4.   The loss of a large quantity of coral on the reef would be devastating to the thousands of species of fish and other animals living in this ecosystem, leading to a mass extinction and unrecoverable loss of biodiversity. 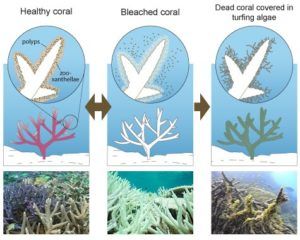 Exhibit B – Coral bleaching as explained on GBRMPA website

Aside from the importance of the reef as a biodiversity sanctuary, it is extremely important to the tourism industry in Australia, so much so that when a recent UN report on climate change mentioned the 2016 mass coral bleaching event, Australia’s Department of Environment moved to remove all mentions of Australia in the report, citing the negative impact it might have on tourism5. In the year ending June 2016, out of Australia’s 7.2 million yearly visitors, about 50% visited exclusively on holiday, and collectively spent around 15.9 Billion AUD6, equivalent to more than 1% of the country’s GDP.  Furthermore, surveys conducted by the Australian government’s tourism research agency as recently as February 2016 indicate that out of the top ten tourist attractions, six are aquatic and coastal offerings, with The Great Barrier Reef, Wildlife, Unspoiled Natural Wilderness, and Beaches holding the top four spots7.  Clearly, global warming can potentially affect GBRMPA’s ability to protect the reef, and attract tourism essential to Australia’s economy. As fewer areas of the park remain attractive, it is reasonable to believe that there will be added pressure from the tourism industry on the surviving areas. This added pressure combined with rising water temperatures could lead to the worst-case scenario of losing the Great Barrier Reef forever.

Action Plan – Too Little Too Late?

In 2007, the GBRMPA released a report titled “Climate Change Action Plan 2007 – 2012”8, which outlines specific initiatives aimed at mitigating the effects of climate change on the reef. These initiatives included performing more robust science through university partnerships, increasing the frequency and precision of the coral health monitoring, and reducing other pressures to the coral such as contaminated water, fishing and irresponsible tourism operators.  The report also mentions working with broader government organizations to try to reduce the climate footprint.  Unfortunately, as evidenced by the disastrous 2016 bleaching event, none of these initiatives were effective when the water temperatures continued to rise. A more comprehensive, worldwide plan is needed to normalize the temperature of the planet’s oceans.  Sadly, at the current rate, it is possible that total extinction will occur over the next few decades.

In my opinion, the GBRMPA should consider more extreme measures within its control in order to make this issue more publicly visible, and hopefully apply more pressure to governments and policy-makers worldwide. Every one of the millions of tourist that visit the Great Barrier Reef every year should be shown a dead, bleached reef, and educated on the causes of coral bleaching and other effects of climate change on the reef’s ecosystems. The hope is that this somber experience might compel some people enough to at least attempt to change their behavior when they return to their own countries, lest they play a part in killing the reef.  If enough people care about this issue and pressure governments to act, it is possible to make a difference and save the Great Barrier Reef before it is too late.

Life Healthcare: Managing the cause and effect of climate change