The last few decades have been witness to an anomaly- there has been a rise of a commercial wine culture in England- where wine-making was once mostly an eccentric hobby; the wine itself regarded as somewhat of a joke. England is now going strong with over 400 commercial vineyards and sparkling wines that are outpacing their French rivals at prestigious competitions. Companies such as Denbies Wine Estate- England’s largest vineyard- now have the confidence to invest in large acreages of land and varieties like the Sauvignon Blanc from the warmer Bordeaux region, despite England’s notorious reputation for inclement weather once not deemed suitable for even the cooler-weather grapes that needed just minimal days of warmth. All thanks to temperature increases in southern England by an average of 3oF over the last four decades. [i]

Global warming has a variety of markers, and a particularly significant impact on the global viticulture ecosystem. Wines are environmental sensors- their composition and chemistry is drawn from the soil and its markers, the air, and ground and precipitation water. Because of this, climate change has two complex manifestations- changes in the physiological composition of varieties of traditional-region wines, and the development of new regions for wine-making, such as southern England.

Traditionally, most wines are fussy, and need specific microclimates mostly isolated to a geographical belt in the middle latitudes where the average daytime temperature is between 12oC and 22oC. Increasing temperatures in this region have resulted in drifting vineyards as producers attempt to experiment in new, cooler zones. The structures of wines have also been affected by the changes in soil chemistry and ripening time- earlier harvests causing increased sugar levels, in turn leading to changes in wine flavor, alcohol content and color.[ii] The flavor of many wine vintages as we know them today stand to be made fundamentally unrecognizable.

The only ray of light is that grape-growers are incredibly resourceful, and wines themselves are hardy and adaptive. Two major, mutually inclusive approaches are now being followed- farmers are working to adapt to current changes, while also playing their part in farming consciously to mitigate their own carbon footprints and resource wastage.[iii]

The Napa Valley-based Frogs Leap Winery is one such small manufacturer that effectively embraced these two approaches together- establishing themselves as advocates of change farming.[iv] Genetic solutions to develop strains of drought-resistant wines are an unlikely avenue- despite advances in grape breeding, no new varieties of wine have been deemed appropriate for formal adoption in the last 50 years.[v] Instead, the onus has shifted to devising methods of farming that work in hostile weather. One of Frog’s Leap’s most significant accomplishments is that all their grapes are dry-farmed. Certain operational adaptations in farming are needed to accomplish dry-farming. The grape variety chosen must possess the capability of growing deep roots and a resistance to pests. Loamy soils with high organic matter content are most effective as these varieties possess water-holding porous spaces. Optimal vine-spacing techniques adopted allow vines access to groundwater without competing with one another, and accompanying canopy-trellises provide the soil cover from the sun. After the initial struggle with limited water, these wines take extremely deep roots, making them more resistance to both pests and diseases- significantly reducing the need for pesticides or fertilizer. The cluster-size of the resultant grapes reduces, but the flavor is less diluted and richer in texture. 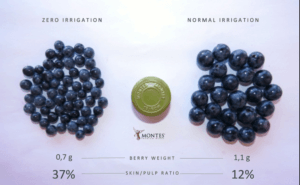 Frog’s Leap is also working on its carbon footprint and all day-to-day operations are 100% solar powered- solar panels placed across half an acre of land provide power and result in a sizeable reduction in CO2 emissions. LEED-friendly building design with superior insulation and placement has also reduced refrigeration needs and the related carbon footprint.[vi]

While these practices are a major headway, there is definitely more that Frog’s Leap can look to do to make their operations more sustainable. While working towards becoming carbon-zero, the next step would be to focus on creating sustainability in other post-harvest elements of the process such as bottling and distribution. Additionally, to play their part in developing a global definition of carbon free wines, wineries like Frog’s Leap need to actively work with international bodies and their local governments.[vii]

New grape civilizations may rise as a result of human tenacity to adapt to any situation, but the fact remains that these are making an entirely different style of wine- because grapes are not just the product of a farm- they are the product of centuries worth of experimentation across several cultures. The need to combat global warming is all the more urgent when we appreciate that these new regions are in their infancy, and the trial and error required to perfect a wine takes a lifetime- and a lifetime is exactly what we may not have.

Will United Insurance Holdings Corp. be Sunk by Climate Change?

Tesla races towards a sustainable ecosystem

Student comments on The Grapes of Wrath: Climate Change and the Viticulture Industry