The Blockchain is a technology that is expected to be as disruptive as the Internet or the electricity. It is widely known as the technology supporting the digital currency Bitcoin, but its usage goes far beyond crypto-currencies; in fact, based on the Blockchain technology The Ethereum Project provides developers with a smart contract platform to re-imagine and re-design the world’s most fundamental interactions [1].

What is the Blockchain?

“Blockchain is a peer-to-peer distributed ledger technology for a new generation of transactional applications that establishes trust, accountability and transparency while streamlining business processes. Think of it as an operating system for interactions.” — Jim Zemlin, Executive Director, Linux Foundation

In other words, the Blockchain is a distributed public ledger recording all the transactions made in the network. This shared infrastructure can move value and ownership of property around. It’s a decentralized data infrastructure on which applications such as Bitcoin are built and run [2] [3]. Thanks to the open architecture of the blockchain technology, many applications are being developed; one of them is The Ethereum Project [4].

While the digital currency Bitcoin is limited to financial transactions, Ethereum can cover different types of transactions using its smart contract platform. Smart contracts enable the exchange of money, property, shares, or anything of value in a transparent, conflict-free way, while avoiding the need for a third party to clear the transaction. More importantly smart contracts are autonomous; once a contract is specified and running, no additional human action is ever needed, the platform automatically enforces the terms of the contract [5]. Smart contracts are decentralized thanks to the blockchain and are therefore no longer stored on one central database, thus providing the security benefits of such shared infrastructure [5]. As a result, this technology eliminates the counterparty risk and therefore dramatically diminishes transaction costs by getting rid of middlemen.

A wide range of applications.

Financial instruments such as insurance contracts, stocks, pension rights, or derivatives can be translated into smart contracts readable and automatically enforced by the platform. Ethereum smart contracts can be created to represent ownership of financial securities. For example, companies like WeiFund are already using Ethereum to provide a decentralized crowd-funding service for investors and entrepreneurs [6].

Physical assets like commodities or real estate can be linked to their owners and traded using Ethereum. For example, Digix has launched the next generation digital gold exchange platform where its community can trade gold directly, bypassing banks [7]. Other companies like Rexmls are applying the same logic to real estate with one of the first decentralized real-estate platforms, making the transfer of real estate titles as easy as sending a text message [8].

Combining the Internet of Things with the Ethereum platform opens the door to securely rent apartments or compatible smart objects, like autonomous cars, without intermediaries such as Airbnb or Uber. Further, Ethereum will enable machine-to-machine transaction at scale; hyper-interconnected smart objects will have the ability to request and communicate information as well as process transactions with each other. For example, a fridge could order more yogurts to the convenience store and process the payment without any human interaction [9].

Example of the code for a Ethereum smart contract: The Blockchain Congress 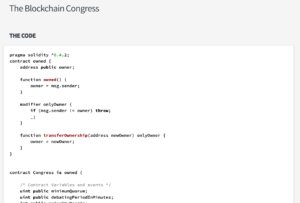 Recently Ethereum was used to create a decentralized autonomous organization “The DAO”. This was an organization living in the cloud, with no tie to any particular nation, whose ownership was distributed among its shareholders. Ether (ETH), a native digital currency equivalent to the Bitcoin on the Ethereum ecosystem, was used to fund and start the organization [10]; one Ether equals one voting right. Theoretically, voting rights could be assigned not only to humans but also to machines. In a way “The DAO” governance system could be seen as an independent legal system based on a set of smart contracts; therefore, the organization could not be influenced by external forces such as corporate lobbies or governments. Ethereum eliminates the need for trust between parties as well as the need for a centralized entity coordinating these parties. Since the trust has been shifted onto the technology, people can coordinate themselves, in a trustless and decentralized manner without having to rely on any third party organizations such as corporations or public institutions.

Even though the Ethereum Project is in its infancy stage, it represents one of the most exciting applications of the blockchain technology to date. Should your car have the same voting right as you when it comes to planning your city’s next road infrastructure?

Spinning and Winning: How Flywheel’s Digitization Competes in Boutique Fitness

Digitizing the globe one pixel at a time – Google Maps

7 thoughts on “The Ethereum Project: the World 3.0”