“[I felt] like there was such a discrepancy between what creative people are worth and the financial engine of the web that is paying them.” – Jack Conte, Patreon founder [1]

On July 2016, N.K Jemisin quit her day job and became a full-time author. Prior to quitting her day job, N.K. had published six novels, which had been nominated for prestigious genre awards and landed on the New York Times Notable List. Despite this, Jemisin worked from 9-7, largely because “writing income is inherently unstable.” Seeking more time to write, she decided to try fundraising her income through the web platform Patreon, asking fans to donate $5/month so that she could spend more time on her novels. As of November 2018, Jemisin has 1500+ patrons providing her with $6000+ in monthly income. [2]

Patreon was founded in 2013 by musician Jack Conte, and today has more than 2 million active patrons servicing more than 100,000 creators [3]. Instead of asking for money for a one-time specific project, like Kickstarter or Gofundme, Patreon mimics a patronage system where subscribers can provide ongoing support for creators they love. In turn, creators provide exclusive content to patrons, typically offered in tiers: $1/month might give you access to works-in-process, while $25/month leads to a personal thank-you note. 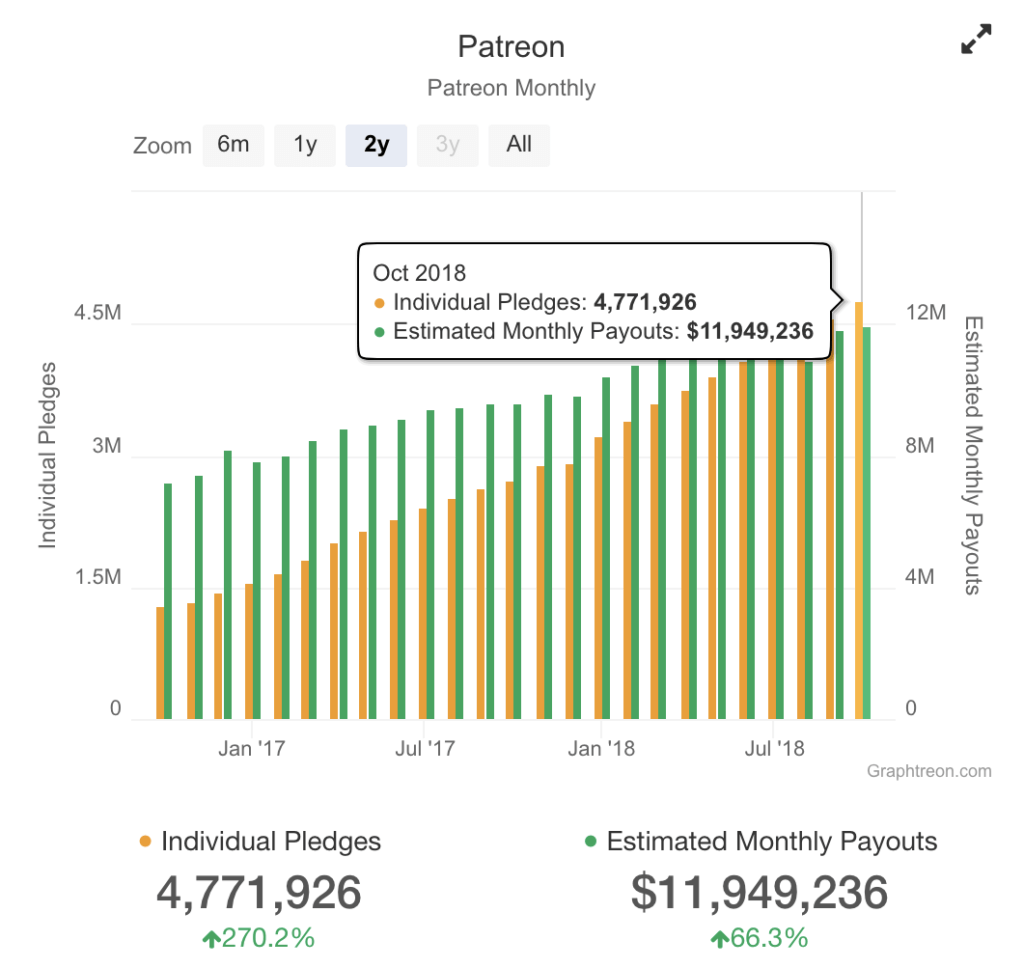 Over the last two years, the number of individual pledges on Patreon has grown by 270%. Source: Graphtreon (https://graphtreon.com/patreon-stats)

Disrupting how creators make money comes with challenges, however. Patreon claims it provides creators with stability – an effective replacement for salary. However, a 2018 Graphtreon study shows that only 1,393 of creators on the platform (<2%) actually earn the 2017 minimum wage of $1,160 a month. The Patreon model works best for those who already have an established fanbase [4, 5]. Patreon’s discovery tools are not robust, so there is currently no meaningful way to build a following on the platform. This has led to some content creators arguing the Patreon isn’t actually an ideal solution to helping creators stabilize income–it’s simply a fancy payment processing platform that supports already-successful artists. [6] 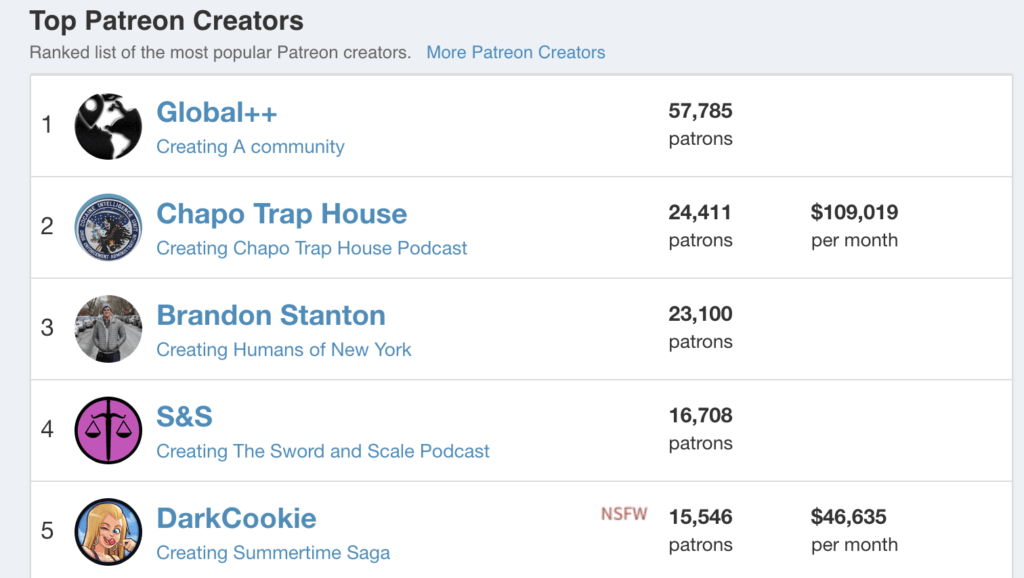 Top Creators on Patreon as of November 12, 2018. Source: Graphtreon (https://graphtreon.com/)

The disconnect between Patreon and the majority of its users became obvious in December 2017 when Patreon announced a change to its fee structure. The change disproportionately affected users making $1 pledges, which caused massive backlash, with subscribers leaving the platform en masse. Patreon quickly backtracked and decided not to rollout the new fee structure, but trust between users and the platform was severely eroded. [7] Several creators moved to Drip, a competing platform owned by Kickstarter, which was launched in the wake of Patreon’s failure to listen to its users.

To counteract some of the challenges posed by their business model, Patreon has taken two bold steps. The first is several acquisitions, with the goal of creating what some outlets have called a “Patronage Empire.” [8] Among their acquisitions is competitor Memberful, which Patreon purchased as a way to add “a self-service white label membership solution to our growing product portfolio.” [9] Although Memberful will remain independently operated, its acquisition indicates that consolidation in this space may be imminent. This highlights how important it is for Patreon and similar “crowdsourced” payment platforms to find fair ways of providing for their creators, who remain “at the mercy of the platform.” [10]

Patreon also launched a Creator App Directory and Developer Portal in 2017, which takes its “open innovation” on the platform to a whole new level. By publishing their API, Patreon is allowing third-party developers to create tools that support “patron-only experiences around the web” – effectively extending Patreon’s reach beyond their own website into other sites like WordPress or Discourse. Additional integrations include Slack and Reddit, with more apps surely to come. [11, 12] This action is likely to reap dividends in the long run as more independent developers create tools for the platform…without being on Patreon’s payroll.

In looking to the future, I would recommend that Patreon invest some of its resources into making the platform more robust for creators, specifically in how they deliver content to users, and how they can potentially build their fan bases. If Patreon’s goal is truly to define “what it means to be a member of something in a digital world” [1], then allowing the rewards of that membership to be more easily reaped by a greater amount of people is crucial. Patreon appears to have outsourced this element of their platform to third-party apps, allowing “consumption and discovery” to occur elsewhere. This isn’t a bad strategy, however they should closely monitor the most successful platforms so that they can avoid costly acquisitions in the future. Adding more value through the Patreon community will also shield them from being simply a payment processor, which is not a sustainable value proposition.

To the readers of this article, I’d like to pose the following question: in what situations are you willing to pay for content? If you think content should be free, how can we best support the people that create it – are there business models that you think we haven’t explored yet? (798 words)

Spotify: Jammin’ Away with Machine Learning

Student comments on The Death of the Starving Artist: Patronage via Patreon