We are back in the days that one single word will drive irrational behavior and make investors willing to throw money at your project. This frenzy behind blockchain – the technology behind digital currencies like bitcoin – is reflected in the amount of capital raised year-to-date by companies exploring the technology: more than $2.7 billion in funding [1], most via initial coin offerings (ICO), an unregulated fundraising tool that raises money through the issue of a new digital currency [2]. 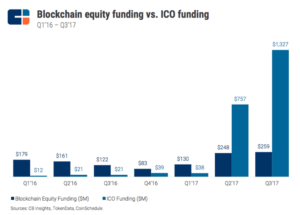 Year-to-date, ICOs have closed more than $2 billion in funding for blockchain-based projects

The value behind the technology

There is a reason behind all this frenzy. The blockchain technology is presented as a piece of innovation on a par with the introduction of the internet itself [3]. It is a secure, decentralized database that everyone can inspect but no single user controls. It is a trust machine that lets people who have no particular confidence in each other collaborate without having to go through a central authority [4]. The problem of trust in a system goes far beyond the financial markets and, it turns out, this technology can be applied in many other use cases.

The complexity and diversity of interest derived from global supply chain relationships pose exactly the kinds of challenges blockchain technology seeks to address [5]. Traceability of items along the supply chain is one example of such challenges. Information is often siloed on systems developed to serve the information needs of each individual actor, making extremely hard to trace back items on the chain and to have a complete picture of the process [6].

Blockchain technology can deliver a new way of tracking shipments and transactions of supply chains of all kinds, from food to prescription drugs to diamonds. Because all the participants would be keeping their own live version of all the data, without a central authority, they could immediately see everything that was going on and trust that no one else had tampered with it [7].

IBM doubles down on blockchain

IBM has been one of the pioneers to explore blockchain technologies in the supply chain use case. In order to showcase its solution, IBM partnered with leaders, such as Walmart and Maersk, and delivered compelling practical tests.

In order to push its technology for being the standard in the industry, IBM created the Hyperledger Foundation, made its software “open source” and attracted other companies that are now working on the project. It has 650 employees dedicated to the technology and 400 clients testing its solutions [7].

Corporate-designed blockchains – like the one IBM is creating – miss the extremely decentralize structure that made the case for this technology so compelling. It concentrates power in a handful of entities. IBM has faced questions from companies worried that it has too much control over the system and could make them dependent on IBM for years to come. The director of the Hyperledger Foundation, Brian Behlendorf, acknowledged that IBM is still the single largest contributor to the project [7].

The company should move away from its private blockchain and use a public blockchain as the foundation from its technology. This move could booster adoption from other companies in the supply chain and focus the efforts of its engineers on building applications and functionalities rather than reinventing the wheel of the blockchain.

Microsoft is going exactly in this direction. It has announced the release of its blockchain framework that is developed using Ethereum as the public blockchain provider [8].

Moving forward, IBM has this hugely ambitious plan to transform the world’s supply chain using blockchain technology. How can it boost adoption from the many players that still use paper-based processes for their day-to-day operation? How far will data be shared across supply chains that comprises many competitors? Will it deliver on its promise to create one system that will rule the entire global supply chain?

[5] Harvard Business Review Digital Articles. “Global Supply Chains Are About to Get Better, Thanks to Blockchain.” Mar 13, 2017

Bringing Mortgages into the 21st Century

Student comments on The blockchain mania hits the supply chain. Will it deliver on its promise?