Tesla was first auto producer to launch fully electric car at scale to address recent sharp increase in carbon dioxide levels in the atmosphere.
With governments turning their heads towards environmental-friendly companies to improve their emission targets, Tesla creates the supply for emission-less demand just in time. The company is on the path to become a leader of the electric cars market, and essentially benefits from the climate change growing concern.

The key contribution of the electric cars and Tesla in particular to the environment lies in its low emission of CO2. According to Tesla spokesperson “an electric car like the Model S has almost four times lower CO2 per mile than an equivalent gas-powered car”. This is thanks to absence of tailpipe, releasing no heat or gases and, hence, low emission. Despite there is still emission due to the electricity generation, the advantage is still considerable. Electric car brings carbon dioxide emission from electricity 35-60% down comparing to CO2 pollution from the gasoline car.

Additionally, in the countries where renewable power sources are more advanced (think solar, wind or hydro), the emission rates are even lower for electric vehicles.

Further, Tesla enjoys a lot of support from the governments in certain countries (Netherlands, Hong Kong, Norway), where thanks to the state subsidies it can offer consumer more affordable prices and tap into mass car market (with its retail price for Model 3 at USD 35,000, subsidies and tax wavers can bring this price down to USD 30,000 if not less in some markets). In fact, according to some extreme scenarios, in Europe electric cars can gain up to 50 percent market share in the next 10 years, bringing 25% drop in the demand for gasoline cars.
Clear opportunity is the international market, where Tesla is focusing on China, which accounted for 11% of its total volume in 2015, reflecting government plan to promote electric vehicles linked to the emission reduction ambition.

With the opportunities come the threats.
In order to grow, eclectic car market needs not only to change consumer behavior, but also to gain sufficient government support. While this is happening to an extent, Tesla and other electric vehicles introduce serious competition to the conventional car makers, subsequently affecting oil industry and threatening transport industry demand for oil products to go down over the next decade. The scale of reduced demand can be extensive. Globally, 45% of all extracted oil is used for transport. This number is much higher in developed countries – for example, in US it is 71% and most of it is for the cars. While the change to sustainable cars is inevitable, oil and car giants are focused on delaying this change by lobbying potential damage that electric cars might bring.
To add, oil companies and car giants represent a strong voice, which can influence government decisions to support electric cars development, but most importantly, to institute low emission regulations. A good example was attempt of California government to introduce zero-emission regulations in 1990, which was fought by car and oil companies until it was removed in 2003. By sticking to the old convenient ways of making cars, the industry dictates the general message sent to the consumer.
Another threat that climate change is bringing is the competition in the shape of self-driving cars. While Tesla has been playing with this idea, it needs to accelerate its development to get at least a chance to tap into the self-driving vehicle market, which already starts to shape. According to the forecasts, private vehicle ownership will decline by half in the next 25 years, with each shared car replacing up to 9 traditional cars. This trend will lead to 40% reduction of annual auto demand and 60% reduction of the car park. While for now, Tesla is well positioned in the family car category, if it will not find the application of its self-driving car, it risks losing serious revenue pool. Of course, Tesla still could provide batteries for more disruptive competitors, but the scale of revenue will be very different. 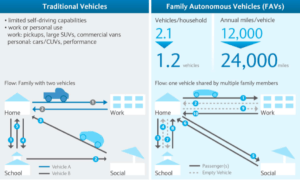 To sum up, climate change offers a great opportunity for Tesla electric cars to lead a brand new big market. Being a pioneer of this market promises high revenue and market share. At the same time, climate change creates tension between key market players. Tesla growth potential might be considerably slower without governments support and strong opposition from large oil and car companies. Additionally, Tesla should reinforce its innovation edge to embrace the change to shared self-driving cars, which climate change is bringing along.