While climate change presents a risk to most companies, it provides an opportunity for others. Tesla, the electric car manufacturer, is a prime example of a company that has taken advantage of regulation designed to curb global warming in its efforts to disrupt the auto industry. Not only does it receive government subsidies, it is also profits from selling regulatory emissions credits to conventional car manufacturers [1]. Transportation accounts for 21% of greenhouse gas emissions globally, second only to electricity and heat production [2]. Any attempt to reduce emissions must reduce or eliminate the amount of gas required to fuel vehicles. While Tesla successfully pioneered the commercialization of electric vehicles in the United States, its largest challenge lies ahead: the ability of Tesla to scale its operations to accommodate a mass market offering will determine its true impact in the fight against climate change.

Tesla made its market debut with the Roadster in 2008, an electric sports car with a whopping $100,000 price tag, and followed up with the Model S sedan priced at $70,000 [3] [4]. Through a sleek design and aspirational price point, Tesla deftly positioned its electric car as a luxury item to be coveted. Now that consumer demand has been proven, Tesla plans to bring a more affordable $35,000 option to market. According to company projections, Tesla hopes to produce 500,000 vehicles in 2018, compared to just 50,000 today [5]. Tesla has already made great strides towards making this goal technologically, operationally, and economically feasible.

Firstly, to meet greater demand at a lower price point, Tesla is investing to lower production costs. The Gigafactory, a lithium-ion battery manufacturing plant, is a key part of this initiative. Projected to be 10 million square feet at completion, the Gigafactory will be able to produce “more lithium-ion batteries each year than were produced globally in all of 2013” [6]. According to Elon Musk, Tesla’s CEO, “You can’t change the world with tiny factories that move slowly. We need big factories with high-velocity output” [6].

Secondly, because electric cars can only travel ~200 miles between charges [6], Tesla has been focused on increasing charging infrastructure across the world. The company currently has 584 “Supercharger” stations across the globe that charge a car 80% in 40 minutes and partners with hotels and other destinations to provide ~3,100 more charging options [1] [4]. Tesla also recently announced a merger with SolarCity, a provider of rooftop solar panels, that will aid its efforts to install high capacity, solar-powered charging stations in people’s homes [7].

Tesla still has a lot of ground to cover if it wants to become a mass market brand with the potential to truly make a dent in the fight against climate change. First of all, Tesla should consider altering its distribution model. It currently eschews franchised dealers in favor of selling cars directly to consumers. Customers can view Tesla models at show rooms in high end shopping malls but must currently place all orders online [4]. Once Tesla changes its target market, it must expand its distribution footprint beyond the most affluent neighborhoods. Selling through franchised dealers like traditional auto OEM’s do will be a less capital intensive and potentially quicker way to expand sales. 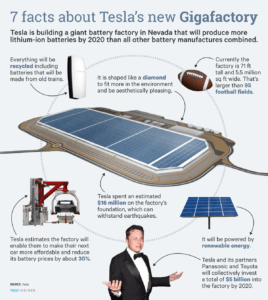 Secondly, Tesla needs to continue to innovate and drive manufacturing costs down. While half the price of the previous model, the $35,000 Model S is still unaffordable to a broad swath of U.S. consumers. Tesla must find a way to cut the price in half again in order to capture this segment of the market. One way Tesla could do this is to vertically integrate its supply chain to bring more stages of battery production in house as opposed to buying from suppliers in Japan.

Finally, Tesla needs to continue to improve the charging infrastructure of the United States to meet the increased number of electric vehicles on the road. While there are 100,000 public charging points in the United States, they take three to four hours to charge a car fully. This inconvenience will be a physiological barrier to many consumers when deciding whether to purchase an electric car. Tesla should expand its exclusive “Supercharger” stations quickly in order to meet projected demand.

In Tesla’s most recent quarterly earning’s release, it announced a profit for the first time three years [8]. Tesla’s investors have high hopes for the company, which is currently trading at almost $30 billion [9], but only time will tell if Tesla is able to generate a sustainable profit and scale its operations to successfully commercialize a mass market product. (771 words)

Tyson Foods and Beyond Meat: A Future of Sustainable Protien Production

Student comments on Tesla: On the Road from Aspirational Luxury to the Mass Market