With 191 million total monthly active users, including 87 million premium subscribers, as of 2018 Q3 [1], Spotify is the undisputed leader of music streaming today. But in the face of stiff competition from online radios like Pandora and Last.FM, and other deep-pocketed streamers like Apple Music or even YouTube, Spotify’s early mover advantage is not in and of itself sufficient to guarantee its future success.

Finding an “Edge” in the Brave New World of Streaming

While music is not a commodity, the provision of music can be likened to one; and the various music streaming platforms are ultimately undifferentiated so long as their catalogues are similar. As the music streaming industry matured and became more widely accepted by both producers and consumers, music streamers have managed to sign up the same suite of major record producers (Universal Music, Warner Music, and Sony Music).

This makes finding one’s “competitive edge” of critical importance for the players in the music streaming industry. On the one hand, this could take the form of competitive chicken a la aggressive pricing or service bundling, or occasional early releases or exclusives with a popular artist. On the other hand, streamers could provide a better service in the form of music curation, i.e. recommending songs to users based on their listening habits.

In the 2000s and early 2010s, this was done manually: For example, Songza manually curated playlists using human “music experts” that users could then listen to; Pandora manually tagged song attributes to each song so that similar songs could be bundled. [2] The downside to human-driven recommendations, however, is that they cannot preclude the curators’ biases, and a manually-intensive process ultimately also means a highly costly process.

Spotify handles this problem using two methods. Echo Nest, a music analytics Spotify acquired in 2014, uses natural language processing to analyze the verbal content of songs and how artists and songs are described online. [4] Convolutional neural networks (“convnets”) applies deep learning technology used in image recognition to analyze audio tracks, thereby identifying high-level “traits” in each song such as tempo, key, mode, time signature, and many others. The result is a prediction for how a song could perform under collaborative filtering, even without there being any historical usage data. [5]

Using machine learning techniques, a “taste profile” is developed for every user, and every song is classified into one or more “microgenres”. The output from these analyses is then cross-referenced with collaborative filtering in another layer of algorithms. This is the foundation for Spotify’s personal recommendation methodology.

Thumbs Up? Thumbs Down?

What are the results of Spotify’s personalized recommendations? For starters, users seem to love it. A quick search through social media platforms reveals a bounty of effusive praise. 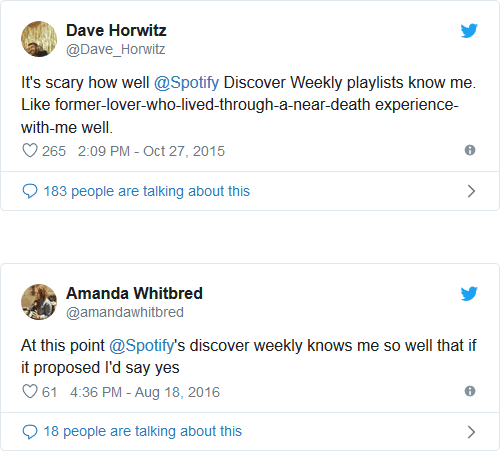 Others approached this from a more critical lens. In a 2017 empirical study on Spotify Radio, it was found that liking, disliking, and skipping do not seem to materially impact the recommendation queue. Moreover, similar artists and songs tend to reappear repeatedly in any given radio, and this is reflected in more anecdotal feedback on the product. Clearly, Spotify has a ways to go in improving the quality of this service. [6]

In another 2017 study on gendered differences in Spotify’s personalized recommendations, it was noted that, despite gender being a mandatory input for account creation, there did not appear to be any difference in the proportion of male/female artists recommended to male/female bots; nor were there any major differences in the artists being recommended (regardless of artist gender). However, 80% of recommended artists were male, whereas just 15% were female. This broadly tracks the music industry’s gender imbalance. [7] Should gender be a variable in making recommendations? Does Spotify have a role in correcting the massive gender imbalance in the music production industry? More broadly speaking, what other factors should Spotify be considering or controlling for in its recommendation algorithms?

Can data buy you value in the capital-intensive oil and gas industry?

How Stryker Hopes to Win with Additive Manufacturing

Student comments on Spotify: Music Discovery in a World of Discover Weekly