Southern California Edison (SCE), a subsidiary of the publically traded utilities holding company Edison International, is one of the largest electric utilities in the world, serving 15 million people across Southern California. SCE’s history is intertwined with the history of the region, tracing its roots back to the small, local utilities that powered Los Angeles’ initial industrial boom in the late-1800s and incorporating following a series of mergers in the early-1900s. SCE has long been a leader in renewable energy, becoming the first investor-owned utility in the U.S. to operate a commercial nuclear reactor in 1957, working with the U.S. Department of Energy on wind and solar power generation alternatives starting in 1970, and installing its first large-scale solar power plant the Mohave Desert in 1982.1

California has been an international leader in the push towards renewable energy production since 2005, when Governor Schwarzenegger committed California to the same greenhouse gas emissions cuts agreed to by much of the world in the 1997 Kyoto Climate Treaty (reducing greenhouse gas emissions to 80% below baseline 1990 levels by 2050). To ensure this goal was reached, California’s current governor, Jerry Brown, added an interim target of a 40% drop in emissions by 2030 in April 20152 and in September 2015, the California legislature passed a law requiring California to get half its electricity from renewable sources by 2030. While this legislation appears to be in line with the targets set by other developed countries in Europe and Japan, it is in fact far more aggressive due to California’s rapidly growing population.3 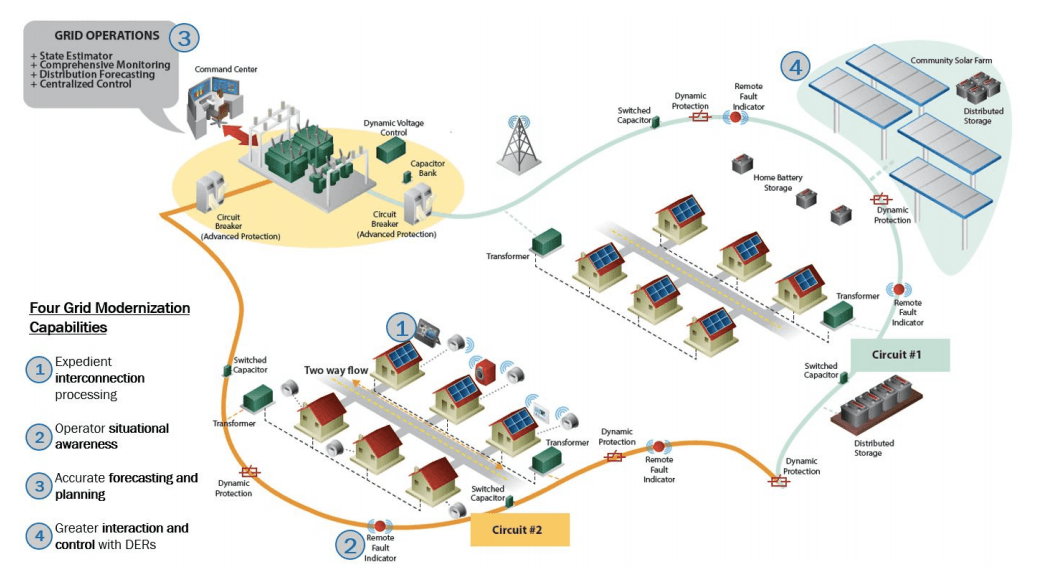 SCE is attacking these regulatory mandates through a two-prong approach, centered around both increased generation of renewable power and mechanisms to better control how power is used on their network. In 2004, prior to Governor Schwarzenegger’s initial commitment, SCE was already the nation’s largest purchaser of renewable energy.5 In the 10 years since, SCE has increased their renewable power generation by ~40% as a result of both large infrastructure projects, such as the Tehachapi Renewable Transmission Project, and an increase in small scale home power generation, largely through government incentives that encouraged homes to add solar panels to their roofs.6 While SCE now gets ~24% of its total energy from renewable sources, the significant variance in electricity generation from these new sources has resulted in mismatches between energy production and demand during particularly sunny or windy periods.7 To smooth the energy production curve, SCE is currently in the middle of installing the largest grid-connected energy storage purchase in U.S. history. This will allow excess energy production to be stored and used during peak demand periods, rather than simply wasted.8 Additionally, SCE is working to modernize its power distribution network through the installation of smart meters and remote monitoring and control devices, along with a digital communications network to link these sensors together. These investments will enable increased more detailed demand forecasting capabilities that will lead to increased efficiency in power generation.9 In addition to these regulation-required changes, SCE is also preparing for a significant change in patterns of electricity demand due to electric vehicles. Currently, electricity demand has significant peaks (ramping up through the afternoon when A/C is in use through the early evening when people come home from work) and valleys (from the later evening when people go to sleep through the morning when people go to work). California is already the highest penetrated electric vehicle state and adoption is expected to rapidly increase over the next decade.11 Electric vehicles have the potential to change current electricity usage patterns, with owners charging their cars at night, leading to a smoother curve, with a smaller valley. While there is significant headroom to produce energy to meet this demand, the ability of distribution system components, such as transformers, to handle this new demand structure is uncertain. These components were designed to handle current usage patterns and the long-term impact of a constant high load remains uncertain.12 While SCE has done an admirable job of adapting to the regulatory requirements placed in front of them, they also need to invest to ensure that their distribution system is prepared to handle similar changes in consumer energy requirements.

In a torn up town, no post-code envy: The New York City Housing Authority

In need of a Band-Aid: Johnson and Johnson’s climate change strategy

Student comments on Southern California Edison: The power to change