Every year, millions of tourists travel across the world to head to warmer climates to enjoy sunny beaches and water sports.  In 2012 in the United States alone, water sports made up a $86 billion industry—the largest portion of which consisted of boating [2].  A large portion of people like to take their vacation a step further and truly become one with the sea by diving below the ocean surface for long periods of time—a sport known as scuba diving.

Scuba diving started out as a necessary tactic for search and rescue procedures and was later adapted for military use.  The first recorded scuba apparatus was developed by Henry Fluess, an English diving engineer in 1878 [1] (see Figure 1).  Since then, scuba diving has taken off both as a branch of the Navy as well as recreationally.  As of 2013, there are as many as 6 million active recreational scuba divers in the world who spent over $228 million on scuba gear and experiences [3].  Mares is one company that benefited from this large amount of spending.  Mares is a scuba equipment manufacturer that was started in 1949 in Italy by Ludovico Mares.  They have since merged with U.S. dive company Dacor to become one of the largest scuba manufacturers in the world [4]. 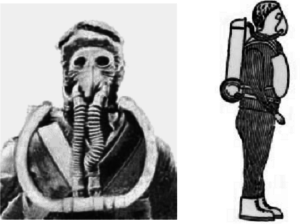 In recent years, climate change has been on the forefront of Mares’ mind.  Human-induced global climate change has caused sea-levels to rise, increased air and water temperatures, and changed precipitation patterns.  It is now predicted to alter coastal and oceanic environments through a variety of direct and indirect impacts [7] (see Figure 2).  For example, the early 1980s brought increasing sea surface temperatures (SSTs) and therefore tropical corals experienced large-scale bleaching and mortality events [5].  Now, the U.S. National Oceanic and Atmospheric Administration (NOAA) has estimated that over half of all coral reef systems in the U.S. are at risk and that some systems are virtually dead [7].  Coral reefs are home to more than 25% of the world’s known fish species [6], so without a home for so many fish the scuba diving industry is bound to suffer. 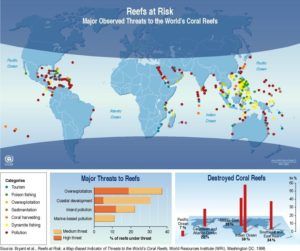 Mares is hoping to reduce or reverse the effects of climate change through several tactics.  First, they are educating their customers on the effects they may be having on the environment and what those effects are having on oceans and marine life.  They have an active blog on their site with such information.  Additionally, Mares participates in events such as “Together for Water Protection” [9] which is a conference to raise awareness about ocean protection.  While Mares is working to help the cause, a more proactive approach to combat these environmental effects is necessary—especially considering that the reduction of coral reefs could put them out of business.  Mares could partner with coral reef conservation organizations such as the National Oceanic and Atmospheric Administration (NOAA) Coral Reef Conservation Program (CRCP) or the World Wildlife Fund (WWF) to support their efforts of protecting these vibrant organisms.  They could also organize employee projects to clean up local beaches and oceans as well as educate local businesses and communities on the effects they may be having on climate change.  In addition, because they already organize global dive trips, they couple provide similar educational or service projects as part of these excursions.

While Mares is working to educate the public on climate change and how it affects the ocean and coral reefs, it does not seem proportional to how badly the destruction of the reefs would be to their business.  There are many options that Mares can do to help reduce or reverse the rate of climate change harm on our oceans.  At the current rate, 60% of the world’s coral reefs will be destroyed over the next 30 years [10], so it crucial that Mares and other companies that depend marine life to act now.

Student comments on Something Fishy is Going On