George Orwell, in a rare respite from his life’s work instilling dystopian anxiety in the hearts of schoolchildren everywhere, once said that “international football is the continuation of war by other means.[i]” Sadly for Mr. Orwell, his native England’s national team has been losing this war for a long, long time. Since their last (and only) World Cup championship in 1966, they have reliably disappointed in international play. Patriotic underachievement notwithstanding, the English have been successful in developing and exporting football’s number one commercial product, the Premier League (EPL). Rising isolationist sentiment on the island could threaten that success.

English football is governed by the Football Association (FA), whose primary mission is to foster the success of England’s national teams in international competition[ii]. The EPL is England’s top domestic professional league; its core product offerings are access to its matches, with most revenue stemming from TV deals[iii]. Despite years of middling outcomes in interleague play [Fig. 1], the EPL continues to dominate its competition in overall revenues [Fig. 2]. Why? Amongst other important factors, such as language and league structure[iv], is its position as the most diverse major football league [Fig. 3]. By featuring talent from around the world, the EPL captures the hearts (and dollars, won, and pesos) of the home country audiences that love them[v]. 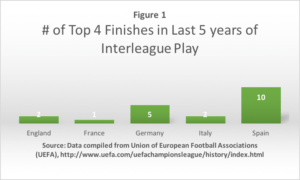 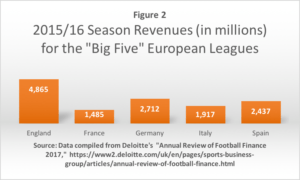 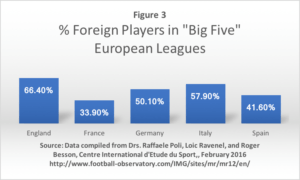 Obviously, players make up much of the value of the EPL’s product. Throughout their careers, footballers might be seen as raw materials, work in progress, and ultimately as a component of the finished goods – the matches themselves. Immigration policy, therefore, is synonymous with trade policy in this context, and has massive implications for the supply chain of talent for this major British export.

While the particulars of the United Kingdom’s separation from the European Union are still being negotiated, last year’s Brexit vote will likely disrupt the EPL’s talent supply chain in three direct ways. First, it threatens to subject European players to British work visa rules designed to make it difficult to sign inexperienced foreigners[vi]. Second, it binds the EPL to the worldwide prohibition on international transfers of players under 18[vii]; the league had previously been able to source junior talent from within the EU. Thus, Brexit might grant the EPL’s top competitors a head start in signing promising young talent, and developing such talent is normally cheaper than purchasing the rights to an already established asset[viii][ix]. Finally, the devaluation of the pound, triggered by Brexit, has rendered already costly[x] international acquisitions even more expensive[xi]. 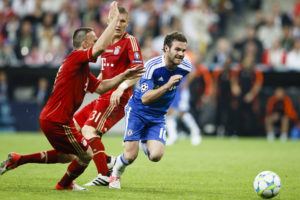 In the short term, EPL leadership is actively lobbying the British government to establish more lenient visa policies for foreign footballers[xii]. It is too early to know how effective these efforts will be, but the EPL would be wise to move quickly from Brexit crisis management to more proactive talent supply chain planning.

The EPL should be concerned with the possibility of further isolationist encroachments on their labor supply. Without the legal limits posed by EU membership, and given their incentives and constituencies, it is conceivable that both the FA and the British government move towards more restrictive labor policies[xiii][xiv]. Such policies would pose a serious threat to the league’s competitive position by disrupting the nature of its global supply chain.

America accounts for 24% of global GDP[xv]. Asia has the world’s fastest growing markets[xvi][xvii]; Africa has its fastest growing population[xviii]. All have relatively underdeveloped football infrastructures. While the EPL is currently aggressively pursuing customers in these markets[xix], it must also encourage its owners to see international investments as investments in their talent supply chain.

Specifically, the EPL should urge its teams to pursue multi-club ownership (MCO). By purchasing franchises in other countries’ domestic leagues, EPL clubs can identify and sign young, inexpensive talent locally[xx]. Once relevant parties (the FA, the government, and the team itself) deem a player old enough, skilled enough, and experienced enough to play in the EPL, the parent team avoids large transfer fees. Essentially, the MCO model encourages EPL teams to secure their supply chain by purchasing key suppliers[xxi]. Manchester City, with teams in America, Australia, Spain, and Uruguay, has been on the cutting edge of this strategy[xxii]. The EPL would do well to see others follow suit.

While a secure, cost effective international talent supply chain will benefit the EPL in any instance, other questions remain. What are the ethics of a talent supply chain such as this one? Is the Spanish league, with its homegrown players and interleague success, a threat to EPL’s commercial dominance?[xxiii] If so, should the EPL invest more in domestic player development?

[v] “The English are bad at playing football—but brilliant at selling it,” September 2017, The Economist, https://www.economist.com/news/britain/21727929-english-clubs-are-being-trounced-their-european-rivals-yet-revenues-are-soaring-why-are-such, accessed November 2017

[x] Richard Burdekin and Michael Franklin, “Transfer Spending In the English Premier League: The Haves and The Have Nots,” National Institute Economic Review No. 232, May 2015. ABI/Proquest, accessed November 2017

[xiii] Richard Burdekin and Michael Franklin, “Transfer Spending In the English Premier League: The Haves and The Have Nots,” National Institute Economic Review No. 232, May 2015. ABI/Proquest, accessed November 2017

[xix] “The English are bad at playing football—but brilliant at selling it,” September 2017, The Economist, https://www.economist.com/news/britain/21727929-english-clubs-are-being-trounced-their-european-rivals-yet-revenues-are-soaring-why-are-such, accessed November 2017

[xxiii] “The English are bad at playing football—but brilliant at selling it,” September 2017, The Economist, https://www.economist.com/news/britain/21727929-english-clubs-are-being-trounced-their-european-rivals-yet-revenues-are-soaring-why-are-such, accessed November 2017

How Supply Chain Improvements are Enabling Growth At Adidas

Student comments on Shooting Oneself in the Foot(ball)