A good night’s sleep might be understandably elusive for Michael S. Burke, CEO of $18B infrastructure design and construction firm AECOM.  The scale and variety of risks his firm faces each day are staggering; the firm’s most recent regulatory filings lay out more than 40 of them, ranging from government funding shifts to industry cyclicality.1  While many of these risks are beyond his control, Burke could look to one future technology to improve his company’s processes by de-risking them: additive manufacturing (also known as 3D printing).  In particular, the technology could address three major risk categories:

Speed.  AECOM cites “failure to meet contractual schedule” as a high-level risk across its global construction business.1  Additive manufacturing is well-positioned to cut construction times and reduce variability.  An analysis by The Boston Consulting Group (BCG) suggests that “by operating 24/7 and by reducing onsite glitches and hence delays, 3D printers can cut construction times dramatically,” in part by reducing “deliveries of building materials” and “complex interactions between various trades.”2

Safety.  When AECOM admits its “project sites are inherently dangerous workplaces,” with risks including “employee death,” it is not imagining hypotheticals: just this year, an AECOM subsidiary suffered a fatality on a tunnel job-site near San Francisco, and on at least one occasion in the last five years, the U.S. Occupational Safety and Health Administration has levied fines on AECOM for “serious violations” resulting in a fatality.1,3,4  Autonomous 3D printers could lessen the need to put workers in the most-hazardous sites, and in turn reduce the chance of fatality or serious injury.

Environmental impact.  Many of AECOM’s contracts require them to “manage, handle, remove, treat, transport and dispose of toxic or hazardous substances” in “sensitive environmental areas” and in compliance with environmental regulation in over 150 countries.1  On this front, BCG also found additive manufacturing to be advantaged, suggesting it could “reduce the construction sector’s harmful impact on the environment” by allowing “contractors to use less material,” enabling “up to 50%” of that material to come from recycled sources, and reducing the need for “separate structural units.”2

For additive manufacturing to be an attractive risk-mitigation tool for AECOM, it must first be commercially viable.  And while publications like The Economist may expect “3D printing” to “revolutionise construction,” the headlines are ahead of the reality.5  Just how far depends on the application.  As shown in Figure 1, by one estimate, whole building- or bridge- scale 3D printing sufficient for AECOM’s infrastructure projects may be nearly 20 years away.

Figure 1: Estimates of time to full commercial adoption of additive manufacturing, by application 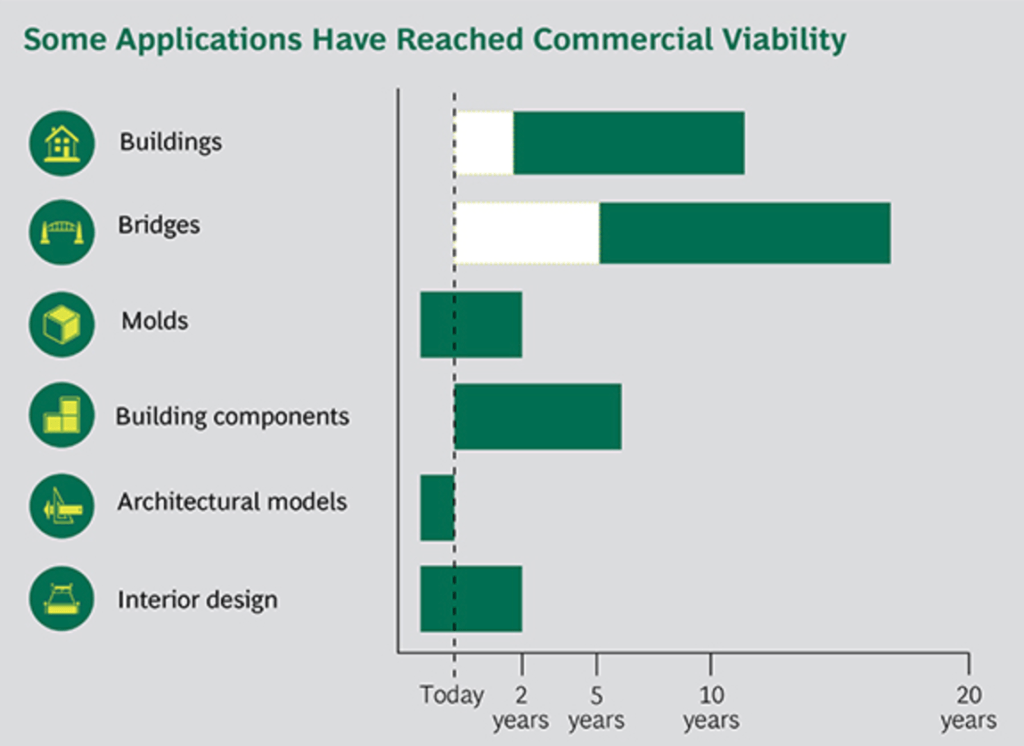 Given the state of additive manufacturing development, AECOM’s current interest in the technology is twofold: (1) applying the technique, where possible, to building components and models, and (2) partnering with smaller companies innovating in the space.

Applying the technique has so far been limited to the United States, where The Wall Street Journal reported AECOM is “printing jail cells out of concrete,” in order to “precisely place openings for plumbing and other fixtures” and ensure security.6

With regard to partnerships, AECOM has been slower to act, signing just one agreement in 2017 with ambitious Chinese 3D printing company WinSun.  The pair have been quiet on details of the partnership, though Antonio Ng, AECOM’s Executive Director of Innovation for Greater China, has said publicly that the two promise to “work together on future construction projects” and send “56 members of AECOM from around the world” to a workshop at WinSun’s facility in China.7  Some of AECOM’s competitors, too, seem to have opted for the partnership path—construction companies Vinci and Bouygues have also established partnerships with startups and universities, respectively, on the topic of 3D printing.8

Given 3D printing’s potential to substantially reduce risks in AECOM’s processes, the company could more aggressively pursue the technology:

The short-term: sponsorship.  With interest and investment continuing to grow in the space, AECOM can move quickly to broaden its set of 3D printing partnerships.  This may take the form of projects/tests with additional startups in different geographies, research with universities, and/or agreements with larger corporations also interested in advancing additive manufacturing.

The medium-term: research.  AECOM could leverage its global scale, relationships, and resources to directly invest in developing cutting-edge technology that would move 3D printing forward.  Though it would require substantial investment in human capital and equipment, recent work in autonomous driving—where stalwarts like GM have attracted billions in partnership investment and aim to launch early products by next year—provides a proof point for the type of acceleration possible.9

Though promising, the future of 3D printing in construction is far from clear.  As AECOM grapples with it, foundational questions arise: Is 3D printing revolutionary enough to warrant funding research, or should management wait-and-see?

Ministry of Supply: Using 3D Printing and AI in clothing

ZOZO’S AMBITION: CAN YOU QUANTIFY “COOL”?