Alarm rings. Pull yourself out of bed, put the kettle on for coffee, splash tap water on your face. Slippers on, and you stride out the front door to grab the morning paper.

How many of us still read the physical paper in the mornings? The traditional print media paradigm has completely shifted with the advent of digital media. Millennials and Gen Z’ers consume articles on their morning commutes, in between meetings or classes, and even on the toilet.

The New York Times (NYT) is facing fundamental industry disruption. It needs to both update its business model, to compete with the content and value that new digital-media outlets provide, and update its operating model to deliver this content in a way that aligns with the modern reader’s lifestyle.

In the following paragraphs, I’ll discuss how the NYT has adjusted aspects of its business and operating models from Before Digital Era (B.D.E.) to After Digital Era (A.D.E.).

BUSINESS MODEL: DECONSTRUCTING THE VALUE OF THE NYT AS CONTENT PROVIDER

B.D.E. In terms of subscription revenues, readers paid for annual newspaper delivery service. In terms of advertising revenues, organizations or individuals took out “classified” advertisements and paid based on the page’s prominence and the amount of space “rented.”

A.D.E. NYT offers a ‘freemium’ tier with 10 articles per month at no charge to compete with other online substitutes such as The Huffington Post, while full subscribers pay between $3.75-$9.40/month for various levels of access and numbers of devices.1 Regarding advertising revenues, the NYT parses sophisticated information about which articles readers are clicking on and their search history (e.g. via Google AdWords) to push them hyper-individualized promotions. NYT is paid by advertisers based on price-per-click metrics. 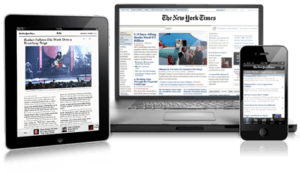 B.D.E. Newspapers developed a broad range of content to attract a wide and diverse set of readers.2

A.D.E. The NYT developed a dedicated strategy team to oversee, track, and guide its new digital content-creation process. Today, the team focuses on tailoring content to unique readers and stitching together more deliberate narratives. For example, experimenting with time-based journalism, the paper published a collection of videos on love and stories by Nick Kristof on sex trafficking on Valentine’s Day. Internally, the company assessed that “both were huge hits, exclusively because our readers shared them on social… Very few articles from a typical day’s paper will garner this much traffic in a month.”1 The paper also uses structurization of data – categorization based on geographic location, timeliness, story threads, types, etc. – to enable readers to curate their own experiences. This has been generally successful: “Just adding structured data, for example, immediately increased traffic to our recipes from search engines by 52 percent.”3 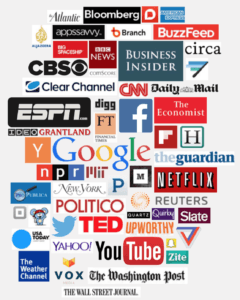 B.D.E. Consumers subscribed to the NYT and received a physical newspaper on their doorsteps. Substitutes included other newspapers, e.g. the Wall Street Journal or the local paper, or television news. There was a single daily point of interaction with the user, at the time of delivery.

A.D.E. Readers open the NYT website or app when they have a free moment and feel an inclination to read the news, or are directed to an article from friend or other webpage.

The NYT has invested heavily in direct-to-consumer digital channels that will create numerous “touches” with readers throughout a day. According to the NYT’s Digital Strategy, “only one-third of readers visit the home page; the rest are directed to specific articles by friends or other media.”3 This demonstrates the importance of making news more modular, shareable, and digestible. The paper has created “morning digests” that contain “everything you need to know to get through today,” and bite-sized journalism on key topics, such as “Transition Briefing: Here’s a quick guide to Donald Trump’s new picks [for Cabinet].” It has also invested heavily in data visualization and infographics. 4 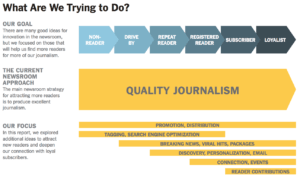 However, not all of the NYT’s sashays into the digital era have been successful. The free NYT Cooking app and The Scoop, an app-based guide to NYC, were both eliminated. Most recently, in August 2016, NYT announced it was shutting down its NYT Now app. NYT Now offered a “curated subset of daily articles in a mobile-friendly, lower-priced package [$8/month]… including morning and evening news briefings, bullet-point lists and a more conversational tone,” but never caught on.5

The paper has a long way to go. Unlike digital media sites like BuzzFeed, HuffPo, or Quartz, the NYT was not born “digital first.” While 60% of BuzzFeed’s traffic comes from social channels, less than 10% of NYT traffic does. As the barriers to entering the digital content space continue to fall, new competitors are emerging from unexpected places, including Facebook and Snapchat. NYT will have to find a way to stand for both quality of and access to information in the digital age. 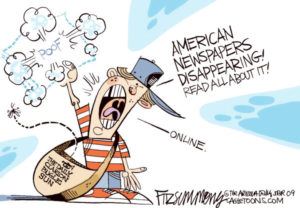 Hasbro Is Not Leaving Monopoly to Chance

The Times are Changing…

Student comments on Putting the “New” in “News”: NYT Reinvents itself for the Digital Age