“History doesn’t repeat itself, but it does rhyme” – Mark Twain

In the early 20th century, the world was more “globalized” than it had been at any point in history.  However, World War I and post-war isolationism led to the Great Depression and destroyed countless businesses, especially those which relied on international trade.[1]  Globalization accelerated after the Cold War, which led to further economic integration between countries and regions.  Companies embraced distributed supply chains; however, these adaptations also created vulnerabilities, particularly to isolationism and political upheavals.  The automotive industry is particularly susceptible to these threats, having developed extensive international supply chains, which assume continued economic openness between countries.

General Motors (GM) has built supply chains which include many countries, at great expense.[2] [3]  Leveraging opportunities of international trade, economic alliances and partnerships, and labor and capital arbitrage, GM has adapted to stay competitive in response to globalization.  However, the same changes that kept GM competitive also make it vulnerable to political shifts towards isolationist policies.  This transforms international supply chains from competitive advantages into dangerous liabilities.

For GM, investments in plants and supply-chain design are made with a fundamental assumption that underlying economic and political conditions will change gradually (if at all).  However, both recent and distant history are replete with examples of whole industries which were disrupted by political events- the US auto industry was similarly upended by the Oil Crisis in the 1970’s, and the September 11th terrorist attacks decimated the airline industry.[4]  These events highlight the importance of businesses preparing for low-likelihood events, and leaders at GM must consider how to mitigate these possibilities.

President Trump indicates a high likelihood of US withdrawal from the Trans-Pacific Partnership (TPP) and North American Free Trade Agreement (NAFTA).[5]  These foundational changes to the economic conditions on which GM has built its business would cause major disruptions.  There are other severe potential shocks GM’s global business, too.  For example, tensions on the Korean Peninsula or in the South China Sea could escalate into hostilities which would disrupt supply chains and cause significant losses of property, inventory, and production capacity for GM.

GM’s CEO, Marry Barra, and her leadership team have made some short- and medium-term efforts to mitigate these risks.  Barra joined the Trump Administration’s business advisory forum, presumably to influence policy decisions favorably for GM and the auto industry.[6]  However, President Trump disbanded the forum, forcing GM to rely more on traditional government lobbying, which may fail to achieve goals of preserving economic stability for GM’s business.

Since the 2008-09 financial crisis, GM has made significant advances to consolidate and economize its operations.[7]  These efforts included relocating/consolidating production, new part sourcing arrangements, and focusing on new technology and emerging markets.  However, many of these adaptations make GM more vulnerable to the risks mentioned above.

GM’s 2016 Strategy Statement shows prioritization of achieving cost efficiencies and risk mitigation to make the company more resilient.[8]  However, GM’s downside risk consideration focuses on downturns, not the more severe shocks this essay addresses.  While the strategy seems proper for the current political climate, it was conceived before current threats to international trade.  Though it could be adapted to isolationist challenges, GM should take additional steps to insulate itself against economic risks. 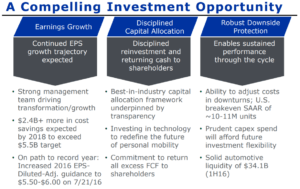 Fortunately, Barra and GM still have time to refine their plans and take action to prepare GM to deal with potential disruptions.  First, GM should continue its efforts to prevent US withdrawal from trade agreements, or if they occur, facilitate favorable new arrangements as quickly as possible.  Preventing rash action by governments is a critical element of any effort to protect GM from potential political/economic shocks.

Next, GM should continue its robust global development, while protecting its investments by ensuring supply chains are redundant and resilient to disruptions.  This may mean holding larger inventories of parts and increasing lead times, but the short-term costs would be well worth the insurance against events like armed conflicts or economic disruptions.  Another element of this strategy would be designing supply chains to rely primarily on domestically available parts, which would mitigate the effects of international strife should it occur.  Finally, GM should monitor and proactively respond to political developments.  Quick action in the face of a disruptive event could minimize the effects and allow GM to adapt quickly to new circumstances.

Suggesting these actions for GM is easy; however, there are competing considerations GM’s leaders must consider as well.  How much added inventory or domestic consolidation is warranted by these threats?  What costs to the bottom line of preparing for potential disruptions is acceptable?  Is it worth preparing for political upheaval when it may not happen?  Business leaders always grapple with uncertainty, but considering these hard decisions is imperative to prepare GM for the future.

When the oldest industry collides with the newest trend