Intergovernmental panel on climate change is 95% certain that human activities are the main cause for the warming of our planet [1]. The rapid change in climate is creating several losers – coastal communities, arctic mammals, farmers from the changing weather patterns – and will ultimately reshape human life the way we see it today. But when some loose, others win, in this case, disproportionately. As the arctic ice shrinks, sunlight will enter the arctic ocean which was previously dark. Fish that hunt by sight are expected to enter this ecosystem in record numbers and thrive on all the pristine food, which the arctic ocean is abundant [2].

So, who will benefit from this change? Salmon, Atlantic Cod, Mackerel and therefore one of the largest seafood companies by revenue – Maruha Nichiro (MN). However, this benefit may be short-lived given the industry’s tendency to overfish and deplete fish species in the Arctic. A critical challenge for Maruha Nichiro will be to avoid mistakes of the past and learn how to harvest this new resource sustainably. 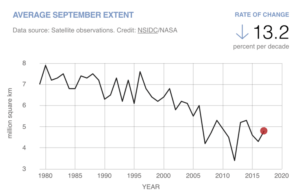 Worldwide fisherman in many coastal areas rely on fishing as a source of income and also for sustenance. The industry is fragmented based on numbers, but concentrated in terms of value. While 16% of the catch goes to 13 companies globally, these companies control 40% of the valuable and bigger variety of fish [3]. The industry is plagued with illegal fishing where rouge vessels catch endangered species of fish or catch beyond the allocated quota by fishing in international waters that are not carefully patrolled or trespassing on other nation’s waters. Such practices lead to overfishing and in the past, has depleted fish stock in certain areas. Fish stocks are seldom replenished; according to UN, 70% of the world’s fish species are either fully exploited or depleted [4]. Now, with the arctic ice melting, global fish stocks for certain species will regenerate creating an economic opportunity for the fishing industry. This creates a challenge for the management of this company on how to best harvest this resource as a result of climate change. 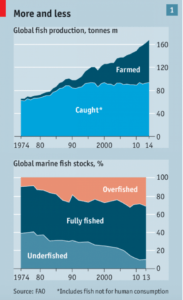 Source: The Economist, “Getting Serious About Overfishing“

Maruha Nichiro, for the first time in history, joined by seven other companies, agreed on a commitment (seaBOS) to improve transparency in supply chain. The objective is to reduce illegal fishing, reduce antibiotic use in aquaculture, and reduce greenhouse gas emissions [5]. A major driver for this cooperation is economic benefit for all companies. A recent study found that proper management of fish stock can lead to $53 billion in profit compared to the current trend [6]. This seaBOS commitment is in the right direction, however unlikely to be enough to reverse perverse incentives to overfish.

There are several important questions for Maruha Nichiro management to consider. How will the aforementioned pact hold when fish stocks become accessible in the arctic? How do you balance the organization’s view on climate change versus taking benefit from the phenomenon? How do you convince competitors to cooperate and not destroy a fragile ecosystem that has already been destroyed once by melting ice?

My recommendation to management would be to take a series of steps that make their stance on this crisis clear and lead the industry by establishing a balanced approach to the issue at hand.

Ultimately, it is unrealistic to expect seafood companies to not harvest this new-found resource but doing so in a sustainable manner can prevent making the same mistake twice in the arctic. It is unclear how and whether management can bring China to the table which has a massive population that needs to be fed. Another concern is how investors will react to the company’s decision to optimize revenue for their long-term as oppose to maximize profits immediately.

I Thought we were Teammates!