Petroleos Mexicanos (PEMEX) is Mexico’s state oil company founded in 1938 after the nationalization of the oil industry. With annual revenues of $120 billion and a $20 billion loss in 2014, Pemex ranks as the 47th largest company in the world by revenues according to Fortune Magazine and is the 8th largest oil producer. Briefly, the Mexican state is the sole owner of the natural resources, including oil and gas (O&G), and Pemex is the entity that extracts, produces and distributes these natural resources. Although Pemex is a monopoly it is a highly ineffective organization that has been running losses for decades. These can be attributed to: (1) labor costs associated with union workers pensions (company has a $100 billion unfunded pension liability), (2) taxes (Pemex’s accounts for one-third of the federal government’s tax revenues), and (3) inefficient operations. Regarding, the company’s operations, Pemex’s faces several challenges, some of which include: investing in exploration and production (E&P) to replenish oil reserves, upgrading its ageing infrastructure and increasing utilization of its refineries.

As a state monopoly, Pemex receives revenues from selling crude oil (mainly exports) and finished products (gasoline and diesel). The company has exploited oil reserves found onshore and in shallow waters at competitive costs, however reserves have continued to decline. In addition, Pemex faces challenges in refining and supplying finished products.

Oil production has declined from 3.4 million barrels per day (MBD) in 2004 to 2.4 MBD in 2014. At current rates of production, Pemex’s reserves are expected to last for 8-10 years. In addition, the company has exhausted most of the oil reserves found in shallow waters and lacks the technology to explore in deep waters, where most of the future oil will come from. Since the boom oil years (high prices and high production) of 2006 – 2008, Pemex has continued to underinvest in exploration and technology as the Mexican government has diverted resources to fund its current account in the midst of rampant corruption scandals.

The company’s margins have suffered for several reasons. Some of these range from privileging the oil workers union to inefficient processing of crude oil. After the nationalization the Mexican state built six refineries throughout the country. Mexico produces mostly (54% production) heavy oil (high in sulfur) and as Pemex continues to explore deep water this trend is expected to continue; deep waters in the Gulf of Mexico have reserves of heavy crude. Refineries were built in the 1970-1980s to take as raw product sweet oil, which is easier and cheaper to process given lower levels of sulfur. The government has underinvested in updating refineries, and moreover to transform them to process heavy crude, which is what Pemex has been mostly producing. Mexican refineries operate at roughly 73% capacity, and consume about 42% more energy and suffer 12 times the number of non-schedule work stoppages compared with international averages. As a result, Mexico is a net exporter (about one third of total production) of heavy and sour crudes, which trade at a discount as these are harder to refine and are mostly processed in Texan refineries. At the same time, Mexico imports about half of its gasoline, a higher value-added product. This export-import relationship has and will continue to press Pemex’s margins. 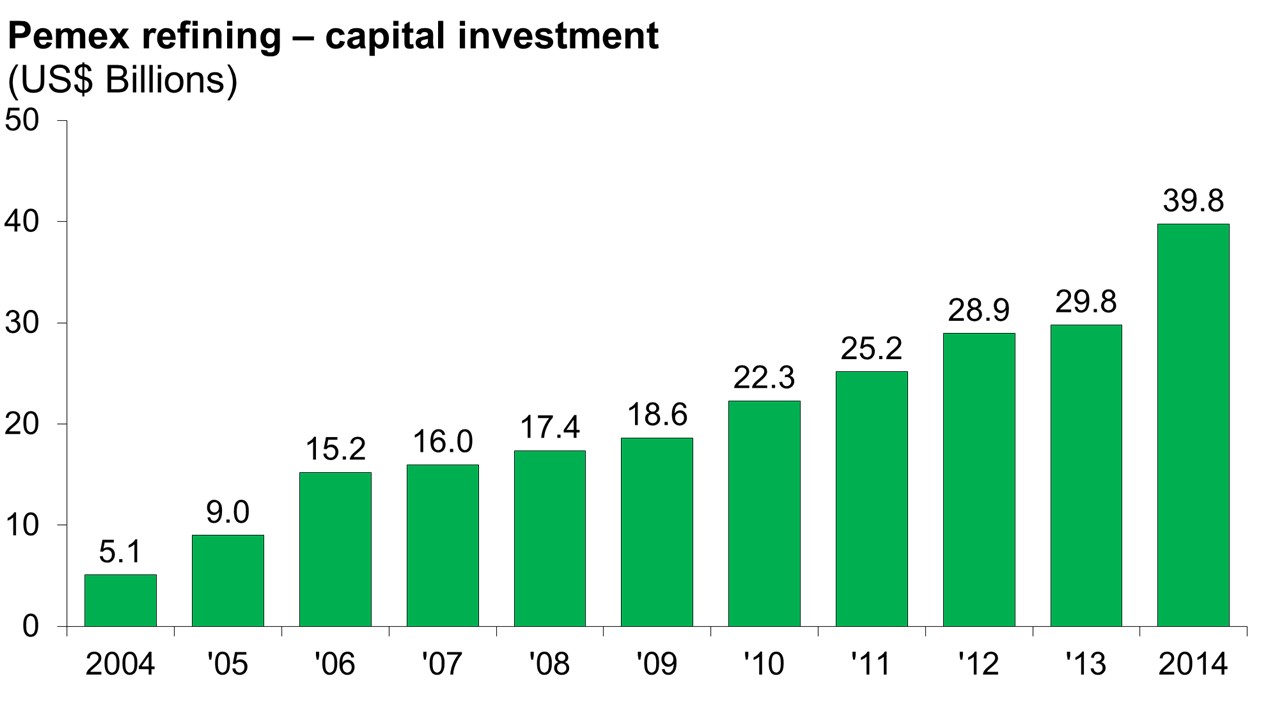 The Mexican government recently passed an Energy Reform that will allow for foreign investment, opening the industry to new competitors and ending Pemex’s 90 years monopoly. In January 2016, BP, Shell and other companies will be allowed to open their own gas stations in Mexico. Pemex will still supply gasoline to its competitor’s gas stations. However, in a couple of years competitors will be allowed to import refined products competing vis-a-vis with Pemex.

If Pemex wants to continue to dominate the Mexican market it will have to align its operating model with its business model – reducing inefficiencies, decreasing the union labor power, attracting talent and putting an emphasis on profitability.

Pemex’s has taken its first steps in this direction by launching a 10-year capex investment to revamp its refineries and expand current capacity, and has started negotiations with oil workers. If Pemex does not increase its transparency and performance in the short and medium term, it will be sentenced to be the big loser in the Mexican O&G industry.

Blue Apron and the Race to Innovate Dinner