UK-based Pearson PLC (FTSE: PSON) is the world’s largest education and book publishing company with revenue of 4.5 billion GBP and EBITDA of 779 million GBP in 2015 [1]. The company’s business model consists of publishing K-12 and higher education textbooks for the US (over 60% of revenue and 66% of operating income in 2015 came from the US) and offering testing/assessment services and professional qualifications. In recent years, Pearson has been under considerable financial pressure amid slowing demand for print textbooks and dwindling college enrollment in the US.[2] Subsequently, the company has undergone a series of major restructurings, the most recent including the elimination of 4,000 jobs announced in the beginning of 2016 (approximately 10% of its total workforce). [3]

In addition to its core business of education and book publishing, Pearson has historically owned several globally renowned, non-core assets within financial news/information including the Financial Times newspaper and a 50% stake in The Economist. In 2015, as part of a shift in its strategy to focus 100% on education (as well as to strengthen its balance sheet), Pearson sold these assets to the Nikkei Group and Agnelli family, respectively. [4] In regards to the disposal of these high-profile assets, CEO John Fallon said in a statement that the “pace of disruptive change in new technology poses a direct challenge to how leading news organizations produce and sell their journalism.” [5] The same argument extends towards traditional print textbooks, an area that accounts for approximately 40% of Pearson’s total revenue and is facing serious structural headwinds. [6]

In the past, educational institutions, faculty and students had limited alternatives to purchasing new textbooks. This problem is exacerbated by the fact that the price of textbooks have significantly outpaced inflation.[7] 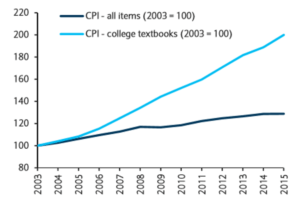 Nowadays, with the rise of digital transformation, there are many more alternative channels available including “second hand” markets (through Amazon and other retail channels) and “rental” markets (also through Amazon and firms such as Chegg) that are significantly lower in cost.

The used book market sees students who have bought a new textbook selling it back online through Amazon or other comparable vendors (e.g. Ebay). Students also sell back used books to the campus bookstore from which they originally purchased the book. Any purchase in the used book market is a “lost” sale in the new book market.

Companies such as Amazon and Chegg buy physical books from publishers and make them available for rent on a semester-by-semester basis at a significant discount to buying a new book outright.

Pearson and other education publishers have responded to these alternative channels by publishing newer editions of textbooks at increasingly frequent intervals. The problem with both of these is that it has resulted in push back from consumers as the difference between “new” editions and previous editions can be unclear.

In order to take on the competition presented by the used book market and book rental market, Pearson is increasingly turning towards digital textbooks. As Pearson gradually shifts its operating model from a traditional print supply chain to a global digital model, the downstream channels that it has historically relied on will invariably change over time. For example, the aforementioned campus bookstores – which have traditionally been a very important part of Pearson’s supply chain – are likely to decline in importance as students and educational institutions go towards more direct avenues such as buying digitally direct from Pearson (individual student) or moving toward institution-wide direct digital access (educational institutions).[8]

With a digital sale, the student effectively is paying for a license fee to access the text (this is the same for non-textbook eBooks).[9] The benefit is that this is not transferable and it cannot be traded around in the secondary markets. For this reason, education publishers in the long run are looking to phase out physical textbooks in favor of digital versions.

As the industry continues to shift towards digital, Pearson should diversify its business in order to further expand its digital footprint. Diversifying into Open Educational Resources (OER) and Massively Open Online Courses (MOOCs) are potential options.

In late October 2016, Pearson and IBM (NYSE: IBM) announced a global alliance with IBM to explore the creation of what Angie McAllister, senior VP of personalized learning and analytics, described as an “intelligent tutoring system.”[10]

Despite the structural headwinds in its traditional print business, as the largest education material publisher in the world, Pearson enjoys a massive wealth of content. Combining this content with IBM’s technology as a potential way to offer one-on-one tutoring has the potential to significantly change education as we know it. As Tim Bozik, president of global product at Pearson, said “Digital learning opens up exciting new possibilities to improve access and outcomes in education.”[11] Time will be the judge whether Pearson can successfully execute on that strategy.

Nest: Turning Up the Heat on B2B Innovation Too