It was the year 2001. The leaders of five major airlines (Delta, United, American, Continental, and Northwest Airlines) were greatly concerned about the rising threat of digital distribution through 3rd-party online travel agencies/exchanges such as Expedia. In contrast to traditional distribution channels of live travel agents and brokers, in digital distribution the sale of a plane ticket takes place online, with data entry and sale finalization executed digitally by the consumer. Some consumers also receive on-demand help from live support representative via text chat or phone.

In 2001, digital distribution was becoming more relevant in the airline ticketing space than ever before due to factors such as consumer demand (more consumers regularly shopping online) and airline cost pressure (billions of dollars spent on agent commissions, a cost which could be reduced if distribution was shifted online).

At the time, airlines were faced with three main possible digital distribution strategies:

However, in the eyes of Delta, United, American, Continental, and Northwest Airlines, the options above posed 4 main challenges:

Uncertainty around how large the nascent digital channel would become

In 2001, only 7% of airline bookings were being made over digital channels [1]; however, researchers projected a 28-50% annual digital growth rate through 2005.

For example, the SABRE digital booking system was accused of being biased towards American Airlines, its parent company.

Only 3% of airline bookings at the time occurred on an airline’s owned website [1].

Thus, these 5 airlines decided to band together to form a joint venture called Orbitz in order to cut out the middleman. By creating their own joint digital distribution platform, the airlines created the following benefits for themselves:

As a joint venture, Orbitz worked because the airlines shared challenges and goals with the other airlines and there were limited vested interests that would have created tension among the airlines because the digital channel still nascent. 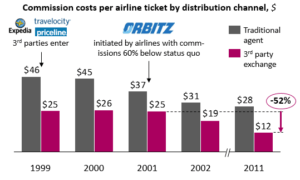 Orbitz was a big success: it cost the 5 airlines ~$250M to build and fund Orbitz until it reached self-sustaining profitability, and it was acquired by Cendant in 2004 for $1.25B [3], showing the potential rewards that could be created by companies that can successfuly turn digital distribution from a threat to an opportunity.

Student comments on Orbitz: Turning Digital Distribution from a Challenge to an Opportunity