As the old saying goes, “an ounce of prevention is worth a pound of cure”. Traditionally, healthcare issues have been treated after the patient becomes ill instead of preventing the problem in the first place. Less than 5% of the U.S. budget on health care is spent on prevention, according to Don Wright of the U.S. Department of Health and Human Services [1]. The problem with this is that treatment is very costly. According to the American Diabetes Association, the total cost of diagnosed diabetes in 2012 was $245 billion dollars, which includes $176 billion in direct medical costs and $69 billion in reduced productivity [2]. These numbers do not reflect all the non-financial issues, such as the physical and emotional pain of the patient.

One of the main reasons why treatment is much bigger than prevention is simply because achieving system-wide prevention is very hard. However, new technologies are allowing healthcare to move towards this direction. One example of this is Omada Health, a San Francisco based company that helps people with pre-diabetes to change their eating and exercise habits in order to reduce the risk of contracting diabetes. To do so, Omada created a four-month program called “Prevent” which is divided in four phases: Eat Better, Move More, Prepare for Challenges and Reinforce Habits.

Eat Better is designed to improve nutritional habits by creating awareness about the nutritional characteristics of what the patient is eating, instead of counting calories. To keep track, patients send a picture of what they are eating to an assigned coach, who gives them feedback on how to make the meal healthier. In addition, patients receive a wireless scale that is synced to their account to keep track of their weight. 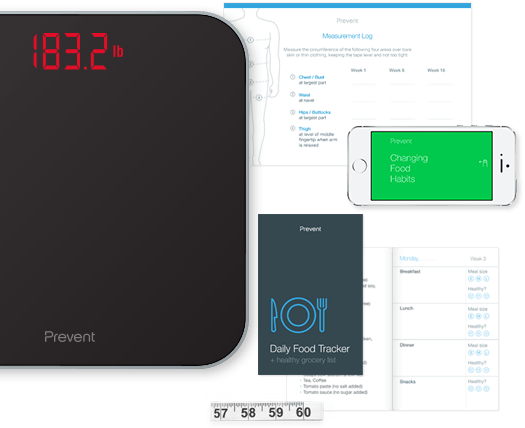 In the second phase “Move More”, the goal is to exercise for at least 150 minutes every week. After completing this second phase, patients start the “Prepare for Challenges” phase in which they learn problem solving skills targeted towards not sliding back into unhealthy habits. In the last phase, patients practice how to deal with negative influences in order to maintain their new healthier habits.

In a study made by professors from the University of California, 187 participants started the program and 155 completed it. Starters lost 4.7% weight while completers lost 4.9% after 1 year. Patients also reduced their A1C (glucose blood level) level by 0.40%. These results were maintained after two years. [3]

Clients and investors believe that these results are promising. In a C series round led by Norwest Venture Partners, Omada raised $48 million from returning investors such as Andreessen Horowitz, US Venture Partners and Rock Health, bringing total funding to $77.5 million. Even three Omada’s customers joined the investment: Kaiser Permanente, Humana and Providence Health & Services. [4]

Thanks to these results, Omada is also able to tie more than half of their fees to success milestones such as weight loss. Omada works with big companies, where they find employees in risk of contracting diabetes. While companies absorb the cost of the program for their employees, they also receive discounts from insurance providers. Omada is working with more than 20,000 patients from 30 companies. [4]

Moreover, the effectiveness of the program will continue to improve. Omada has access to data from tens of thousands of enrolled patients, which allows them to make continuous improvements. Omada could adopt wearable devices to measure additional reference points about the habits of its patients and thus have more data to analyze.

Omada still faces many challenges. According to another study made with the Veterans Health Administration, some patients found the program too impersonal [5]. I believe that such a titanic goal as losing weight and changing lifestyle habits would be greatly aided by a face-to-face interaction with a coach in addition to the online communications. The challenge is in scaling this solution in a cost-effective manner. However, as helping a patient avoid diabetes represents huge monetary savings, it may be worth it to test “brick and click” models and measure if the incremental effectiveness justifies the additional expense.

Medigram and the slow death of hospital pagers

When a Hotel Feels Too Much Like Home: Starwood and the Technology Puzzle