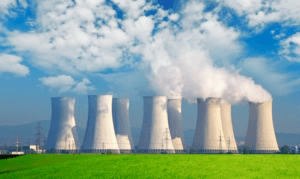 Because of climate change, the nuclear power industry has been revitalized and one company (NuScale) has developed innovative small nuclear power plant designs that are better for climate change and, in my opinion, is in a position to further take advantage of the process of using nuclear reactors to do water desalination.

I’ll start with a little clarification first.  Although the clouds of white “smoke” from a nuclear reactor may seem like it contributes to the climate changing pollution, in reality, the steam emitted from a nuclear power reactor is simply water that has been heated to a degree that turns it into steam.  So it has a similar impact on the environment as water evaporating into the air and forming clouds.

On the other hand, “Coal plants are the nation’s top source of carbon dioxide (CO2) emissions, the primary cause of global warming” [2].  Nuclear power is being revitalized because it can help mitigate climate change.  The International Atomic Energy Agency (IAEA) is a respected international agency that helps evaluate adherence to nuclear (or atomic) energy regulations.  The IAEA Director General stated that because of its low carbon emissions nuclear power can play a significant role in mitigating climate change [3].

One of the challenges of nuclear power has been the high cost of developing a new reactor because each reactor has been custom designed and built to adhere to strict and demanding regulatory requirements.  Each power plant has to be specially designed and approved for the specific location where it is built.  As a nuclear engineer, I have been impressed with the depth of engineering involved in nuclear power plants.  One company that has impressed me for their approach to the challenge of costly construction is NuScale.  Their website says, “NuScale has designed an extraordinarily safe Integral Pressurized Water Reactor (IPWR) based on light water reactor technology proven in operation for over 70 years. NuScale intends to commercialize power plants that are modular and scalable in 50 MWe (gross) increments. Using simplified, passive technology, NuScale’s design reduces complexity, improves safety, enhances operability, and reduces risks” [4].  They build smaller reactors that can be manufactured in a factory and delivered via truck to the site of the new reactors.  Because of their standard designs, they can be approved much faster. 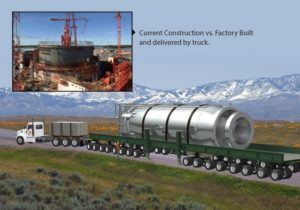 The picture shows the contrast between on-sight construction of the large reactor compared to trucking in the pre-manufactured part and installing it.  Think of the smaller footprint this will require to build nuclear reactors.  Another benefit is the efficiency gained by avoiding the transmission losses of electricity over long distances because the smaller power plants can be built near where the power is needed.  I think NuScale has created a solution that can really help reduce the emissions that cause climate change.

I also think NuScale is positioned well for further advances in helping mitigate impacts of climate change by using nuclear reactors to perform water desalination.  Nuclear power plants have been used for water desalination for many years, but they are the big reactors that are producing electricity most of the time, but are repurposed to water desalination during times of lower demand for power [6].

The concept of water purification through boiling has an interesting visual provided by Dean Kamen who invented the Segway.  He explains the process that can purify very dirty water, even water with biological waste in it, and drink it afterward [7,8].  His machine, called the Slingshot, heats the temperature of the water so that it boils the dirty water until the water turns into steam.  For clarification, steam is pure water in the gaseous state of matter.  So the machine captures the pure water in steam format and cools it down so that it condenses back into the liquid form and becomes pure water.  The water is perfectly safe for human consumption regardless of its initial dirtiness.  One of the challenges of his method of water purification is the small scale of process.

NuScale could build off its small modular reactor design to create small, yet capable water purification systems near where the water will be needed.  Water, of whatever quality, could be brought to the system and then purified for use.  If climate change continues, then demand for potable water may increase to the point where the economics of purifying water with a nuclear reactor make sense.

Is it realistic that one day we may use nuclear reactors to purify water?

Is it all a Hoax? The GOP and Climate Change