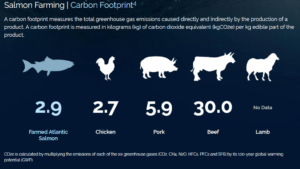 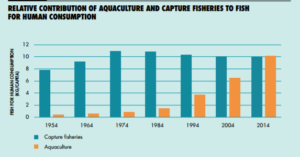 To capture the growth which could be associated with climate change, Cooke will need to mitigate several critical risks borne of or magnified by climate change: 1) extreme weather events, 2) effects of ocean acidification on feedstock and grown stock, 3) ocean warming and potential for increased incidence of disease.

1) Extreme weather events have the potential to disrupt both Cooke’s growing fish stock through radical short term changes in sea environment and its infrastructure through physical assault. Successful cultivation depends on a stable environment in terms of salinity and temperature – increased incidence and intensity of extreme weather events can throw these factors off, reducing the efficiency of production or in some cases destroying entire stocks. Mitigation strategies include a) thoughtful placement of fish pens (e.g., in protected harbors) b) systems to actively monitor and manage temperature and salinity (e.g., salinity regulators); investing in development of the latter will be critical as supply and effectiveness of the former decreases and requires greater focus from Cooke going forward. Salmon aquaculture involves a significant amount of infrastructure (see figure 3 below). The marine variant practiced by Cooke requires fixed or floating pens connected to an array of feeding and waste pipes, as well as digital feeds. Extreme weather can cause severe damage to this infrastructure (e.g., direct destruction, coastal erosion) resulting in expensive repair, and in some cases losses of fish stocks. Mitigation strategies include (a) above and b) increased resilience of equipment (see next generation pen technology in Figure 4 below). The latter strategy is under-addressed commercially at present and could present opportunity for Cooke to benefit itself, while also producing intellectual property/ products which it could sell to peers. 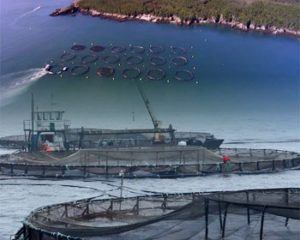 2) Ocean acidification has the potential to alter the map where Cooke can feasibly operate as it is anathema to stock early in the lifecycle and impairs growth rates throughout the lifecycle. Acidification also has the potential to impact the availability and price of feedstock. Mitigation strategies include a) moving more of the early lifecycle of the fish stock into controlled environments (e.g., growing larvae and juveniles in onshore tanks/ hyper controlled ocean based tanks) and b) careful siting of new fish cultivation operations – for the latter, a greater investment could be made in modeling and anticipating projected effects of acidification on specific areas of the coastline, allowing Cooke to secure the most favorable leaseholds for 5,10,15 etc. years in the future. Another strategy in nascent exploration is c) genetic modification of the salmon to be able to maintain growth even in the face of increased acidification[viii]. Cooke has taken steps to diversify feedstock suppliers, but could explore further diversification/ continue experimentation with utilizing proportionally less actual fish (and more plant products), which has side benefits in reduction of all-in GHG to produce adult fish.

3) Rising water temperatures also have the potential to redraw the salmon cultivation map – production becomes less efficient and then infeasible as a threshold temperature is reached and warming has been linked to a greater incidence and faster spread of disease.[ix] Mitigation strategies include 2a,b&c above as well as development and introduction of tailored antibiotics and targeted distribution systems which ensure the stock is protected but limit potential negative externalities from spread of pharmaceuticals into the broader ocean environment.

Cooke faces a unique set of opportunities and risks – the net effect of climate change on the company and its industry is difficult to predict, but could be managed into the positive with some combination of the mitigation strategies above. Additional steps could be taken. It feels like significant value could be created by Cooke or another actor in developing ocean based production systems which are more resilient, mobile, and controlled, leveraging the latest “Internet of Things” technologies. Increased innovation in the sustainability of fish production seems likely to be rewarded by consumers and regulators – Cooke could double down on becoming one of the most efficient producers of animal protein, creating opportunities for expansion in both the developed and developing world.

[v] FAO 2016. The State of World Fisheries and Aquaculture 2016. Contributing to food security and nutrition for al. Rome. 200p

Student comments on Nothing fishy here: opportunities and challenges for aquaculture heating up as fast as the oceans