Netflix is an excellent example of a firm that has aligned its business and operating models to create an innovative media firm that is upending traditional content creation and distribution firms (such as Disney, Viacom, Comcast, etc.).

Netflix defines itself as the “world’s leading Internet television network”. They have done a remarkable job of successfully transitioning their business and operating models to become the streaming giant millions use today. We tend to forget that before Netflix allowed us to stream endless content, they were originally an online DVD rental site. Their business model was to sign up customers to a monthly subscription that would allow them to rent an unlimited number of DVDs through the mail – with no late fees. Their operating model focused on getting these DVDs to their customers as quickly as possible and as a result they established a vast network of DVD distribution centers across the country. These distribution centers would turn around DVDs on average in two days (you mail a DVD back on Monday and get a new one Wednesday)[1]. 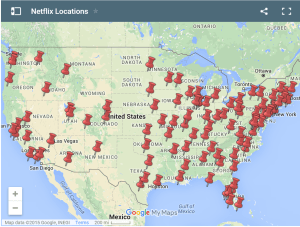 In an effort to decrease this waiting time and provide their customers with a true on demand experience, Netflix moved into online streaming in 2007 (10 years after its founding)[2]. Their operating model still included DVD delivery, but now allowed users to consume some of the content directly over the internet without having to wait for a DVD. As online streaming became more popular on Netflix, they shifted their business model to focus much more on online streaming. Consumers enjoyed binge-watching TV shows whenever they wanted without having to watch any ads.  Netflix’s new primary business model had become to charge users a set fee to stream unlimited amounts of content, on demand, without any ads.

This new business model has been very successful for Netflix as they have grown revenue at a CAGR of 24% since 2007 and shifted most of their revenue into streaming. 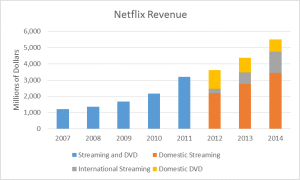 To reflect this new business model, Netflix shifted its operating model to focus more on acquiring streaming content rights and delivering that content to users on as many internet connected devices as possible. Subscribers can stream on their computer, Smart TV, Roku, Apple TV, cell phone, tablets, and many more devices. Netflix made watching its content as easy as turning on and watching TV. The only barrier to using Netflix became deciding what to watch out of the endless options! 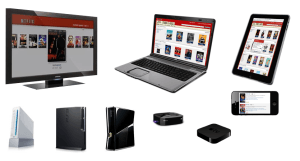 As subscribers continued to grow, Netflix was able to leverage the success of their business model to acquire even more content and provide a larger library of quality content. Their operating shift to focus on a digital platform versus physical DVD distribution allowed them to scale very quickly and easily across the US and move into international territories. International subscriber growth has now outpaced domestic growth and turned Netflix into a true global media firm. 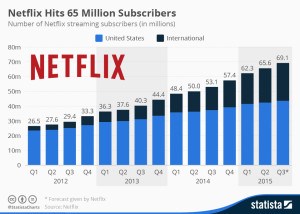 Finally, Netflix decided to expand its operating model beyond simply licensing 3rd party content. They moved into creating original content and developed their own competitive advantage against the content firms they were licensing from. One of their first original series, House of Cards, became a smash hit and helped fuel their subscriber growth[3]. Netflix has released a large slate of originals and continues to add new seasons of hit series. A prime differentiator their operating model allows them to do is provide subscribers with all new episodes of a new season of their original series at once. Traditional TV would require a fan to wait week after week to watch an entire season. Netflix changed user behavior and allowed watchers to consume at their own pace. 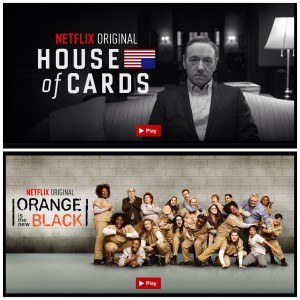 Overall, Netflix developed a business by distributing 3rd party content (from the likes of Disney, Viacom, etc) to develop a large user base. Now it is using that large user base to fund its own original content and effectively become competitors to the 3rd party content providers. Their business model and operating model align very well, which has allowed them to grow very quickly and become a global firm. Investors are clearly enthusiastic about their performance as well as their stock price has performed well over the past 5 years. 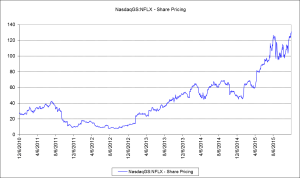