With Disney Parks’ growing profit, they must keep up with competitor’s investments in technology and look to keep guests returning for more. Guests look to Disney to have a premiere family friendly vacation; with this guest promise in mind Disney must use digital technology to increase guest satisfaction and create memorable customized guest experiences. For Disney, the continued advancement of digital technology allows them to unleash a huge collection of information and communications data to specific demographics.

Launched in 2014, MyMagic+ was Disney’s $1B investment for the digital future of Walt Disney World. MyMagic+ (available to Walt Disney World guests) consists of a My Disney Experience website, smart-phone app, RFID band called a MagicBand, and FastPass+ system allowing for a flexible guest experience [1]. All the facets of this development are aligned with guests using the MagicBand to purchase merchandise, food, park tickets, fast pass tickets, and hotel rooms by tapping your band to a scanner with a PIN code (no cash or hotel cards needed!). The app or website allows you to link your MagicBand to your customized Disney experience through pre-planning, with more than 25% of guests choosing to plan their visit ahead of time [2]. Just after six months of MyMagic+, per capita spending at Walt Disney World, “Was up 4% on higher ticket prices, food and beverage, and merchandise spending. Per room spending in hotels was up 3% and occupancy was up 6 percentage points to 86%” [2]. The bet seemed to be paying off.

The pre-planning portion of the Disney experience is integral. Through driving the guest to plan their dining options and choose what rides they want fast pass tickets for, Disney can control the guest experience. How? By controlling guest flow through fast pass tickets and thereby controlling the number of guests they would like to have in certain areas during the day. 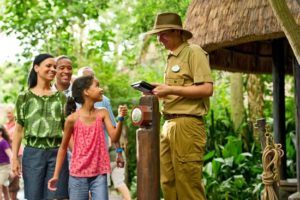 [1]
These benefits pay off for Disney as guests rate their experience at a higher satisfaction levels thus staying in the resort longer, spending more money, and upselling to special experiences. However, up-keep of these programs is high. Walt Disney World would need 3 petabytes of storage to house the information that the MagicBand holds [2]. Storage of personal data is not new to Disney. Prior to the MagicBand roll out, Walt Disney World used finger recognition scanners at its park entrances [3]. The reason being to prevent guests from swapping tickets with their friends.

But couldn’t all of this been solved with just a smart phone app? Why spend $1B on the MagicBand technology?

The problem with technology that takes years to build like MyMagic+ is the fast pace of the digital-tech industry. Shanghai Disneyland which opened June 2016 did not roll out MyMagic+, instead choosing to keep ticket, merchandise, and personal experience sales all on a smart phone application [5]. Douglas Quinby, VP at Phocuswright, said that, “When Disney was first making their investment in Orlando, the mobile revolution was still at a very early stage. Nobody knew how all these technologies were going to shake out” [5]. Perhaps the $1B bet Disney took was premature. In December 2015, Bob Iger, CEO of Disney, stated that in Shanghai, “The consumer will be able to buy their tickets, use their mobile devices in far more advanced, compelling ways than any other place from a theme park perspective” [5]. By not rolling out the Magic Bands in Shanghai, Disney will save on the cost of creating the RFID bands and shipping them to guests. Is mobile the best strategy as it requires less infrastructure?

Disney has invested in patents that have yet to see the light of day. Currently, they hold a patent on a recognition system that scans visitors’ feet [4]. This technology works when a guest walks onto a sensor that retrieves information regarding the guest’s foot to create a customized guest experience [4]. This technology would associate the guest’s data (such as their name) and their foot together to trigger specialized experiences for that guest [4]. Is this a technology (which requires significant infrastructure) worth the returns in guest satisfaction and increased guest spending?

The inherent risks as Disney moves forward is what digital patents to explore further. Disney will need to find ways to mine through their data on guests to ensure the optimal experience with ideal traffic flow and flexible daily results. As parks become more crowded and guests expect magical experiences, Disney must look towards developing patents that allow its cast to engage with guests in a meaningful and genuine manner while ensuring that increased crowds do not hinder the personalized approach they are known for.

[3] Source: Biometric system; From facial recognition on Disney cruises to iris reading at borders, high-tech is taking over travel, via Factiva, accessed November 2016.

The Role of Robots in Warfare