The effects of climate change on the global agricultural industry can no longer be ignored.  Drought, changing wind patterns, and destructive weather events over the past decade have contributed to roughly a 30% reduction in crop yields. (1)  Like productivity and efficiency in a manufacturing process, crops have many factors that affect its year to year yield.   There are harder to control environmental aspects such as temperature and moisture supply, but also the threat of insects and weeds destroying the crop.  Figure 1 below illustrates a variety of sources that can affect a crop’s yield. 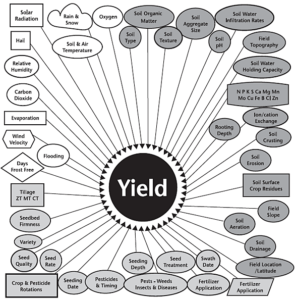 The Monsanto Company (referred to as Monsanto) has specialized in the production of genetically modified seeds, also known as Genetically Modified Organisms (GMOs).  GMOs have improved crop yields for farmers not only by increasing the number of fruit that the plant produces but also by engineering the plant to be more resilient to pest and weed infestations. (3)  According to the United States Department of Agriculture (USDA), the increase in world population is outpacing the improvement in crop yield by roughly 50% (4).  In light of this gap, the agricultural industry has an immediate need for scientific innovation to offset this future food supply and demand gap.

Monsanto can’t have its Cake and Eat it too!

As of December 2015, Monsanto began to campaign its model for a “Carbon Neutral Crop Production” (CNCP) that incentivizes farmers to adopt a new process for crop production management that will in theory, reduce agriculture’s carbon footprint to zero.  The CNCP crop production management system is comprised of three key areas which includes seed production, crop protection, and sharing data, all of which are services that Monsanto provides to the consumer. (5)  Unfortunately, seed production, also defined by Monsanto as “plant biotechnology” or GMOs, and crop protection (use of herbicides and pesticides) have been areas of large public debate.  Figure 2 below is a survey conducted in 2014 by the Pew Survey Center showing that 57% of adults in the United States still find that GMOs are “Generally Unsafe.” (6) 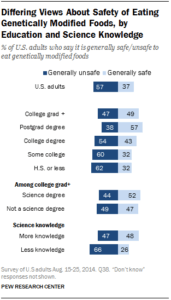 Figure 2: Safety of GMO’s Perceived by the United States Public (6)

As for crop protection, Monsanto has generated several large headlines in the news over the past few decades, and most recently has been battling California over their plan to add glyphosate, a main ingredient in the company’s herbicide, to the list of known carcinogens. (7)

Monsanto’s CNCP plan forces the end consumer of the food to decide between two things: protect your health by selecting organic produce or do you choose GMO or reduce the industry’s carbon footprint by selecting herbicide treated crops.  At this point, Monsanto can’t have it both ways.  With such negative publicity for its products, the company is unable to satisfy both needs, thus ultimately hurting you, the future growing population, and the climate.

Monsanto has the technology and workforce (roughly 20,000 employees) that can innovate new crops to withstand the effects of climate change and ultimately feed the growing population.  Monsanto’s current GMO seed Research and Development (R&D) pipeline focuses on weed resistant plants rather than addressing the climate change concerns of the farmers. (8) With the need for plants to adapt to the lack of water supply and rising temperatures, Monsanto should focus its R&D efforts on creating GMO crops that can handle a versatile climate.  In addition to its R&D pipeline, Monsanto needs to focus its efforts on repairing the image of GMO products.  A prime example of the public’s disdain for GMO products is Golden Rice.  Golden Rice (Figure 3 below) has generated quite a bit of publicity due to its ability to reduce blindness and death in the developing world by providing people with Vitamin-A. However, Greenpeace is attempting to block this life-saving crop from being grown. (9)

In addition to the revitalization of GMO seed production, Monsanto has partnered with Novozymes to harvest and develop naturally occurring microbes found in soil to improve crop yields. (8)  Partnerships like this, if publicized correctly, can help Monsanto mend its relationship with the public.  Monsanto has a unique opportunity to reduce the agricultural industry’s carbon footprint through sustainable farming efforts as well as improving crop efficiencies by engineering crops to withstand the effects of climate change.  If the company correctly allocates its funds to not only innovate GMO seeds but also other crop yield improvements, Monsanto can uniquely position itself as the agricultural leader fighting climate change.

3) 2016. Pocket K No. 1: Q and A about Genetically Modified Crops. International service for the Acquisition of Agri-Biotech Applications. September. Accessed November 2016.