A multinational agrochemical biotechnology company, Monsanto is considered one of the leading producers of genetically engineered organisms (GMOs).  Not without controversy, Monsanto’s innovative crop development products have forever altered the farming industry’s approach to cultivation.  In roughly two decades since their introduction, GMOs have overtaken the market comprising 94% of US soybean acreage, 93% of all US corn acreage, and 96% of all US cotton[1]. 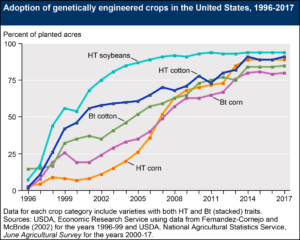 With growing food consumption in both developed and developing economies, despite a reduction in available acreage, Monsanto and its revolutionary GMO technology have played a critical role by developing crops that produce higher yields in challenging environmental conditions. New challenges lie on the horizon, as climate change intensifies, and total farming acreage continues to decrease. A 2014 Food Security and Food Production Systems report[3] forecasts some potential consequences emerging from climate change:

Certain trends – food shortages and decreased yields – are obvious dangers.  Tangential consequences, such as market instability, are less predictable but no less grave.

Through its GMO innovations, Monsanto aims to radically impact global agricultural production, and thus its bottom line. DroughtGard, Monsanto’s drought-resistant corn, is already on the market and may assure continued crop production in the driest of climates.[4] Given the dire projections listed above however, one or two product offerings are not enough.  Monsanto must continue to innovate with the aim to outpace climate change to ensure global food production not only remains consistent but that crops also maintains high yields, the latter being most difficult to achieve.

In late 2013 Monsanto acquired Climate Corporation, an agricultural data analytics firm, for $930 million[5].  Climate Corporation sold insurance products to farmers using its weather modeling platform.  From this acquisition Monsanto moves into services and data, a strong strategic move for a company trying to increase corn yields by 30-50 bushels.[6] Using Climate Corporation’s soil observations and weather simulations, Monsanto can now forecast agricultural shifts, such as weed migrations, and proactively develop technologies to combat such movements.  While crop genetics and data analytics are two levers Monsanto is using immediately, it is also driving long-term impact through its own practices.  Internally Monsanto set an operational goal to become carbon neutral by 2021.[7] To achieve this goal the company aims to focus on seed production, crop protection, and sharing data – increasing adoption of best practices.[8] It must also rely on farmers to achieve this goal, and is developing an incentive program to encourage farmers to use more carbon neutral crop production methods such as conservation tillage and cover crops.[9]

Monsanto’s genetic technology, although essential for global population growth, is highly controversial. A simple internet search titled “Monsanto” yields hundreds of negative stories, yet Monsanto’s response has been minimal, leaving tens of millions of both American and international food consumers to form their own conclusions about GMOs and their benefit to society.  Monsanto has also engaged in heavy handed litigation tactics against farmers, co-ops, and seed companies, alleging violation of its seed contracts and patent infringement. Monsanto’s repeated use of abusive investigative and surveillance tactics have generated much ill will in the agricultural community, causing farmers (Monsanto’s own customers) to refer to Monsanto as the “seed police” and use words such as “Gestapo” and “Mafia” to describe the company’s tactics.[10]

For a company with such a critical role in the agricultural supply chain, these tactics are highly problematic and raise questions as to why the company hasn’t done more to raise awareness about its positive social impact.  For example, Monsanto is engaged with the Gates Foundation in sub-Sahara Africa supporting the Water Efficient Maize for Africa program.  Monsanto donates germplasm, or starter seeds, and drought-tolerant corn to help develop relationships with local organizations and to generate higher yields for poverty stricken communities.[11]  If similar programs were implemented, GMO technology has the potential to revitalize poverty afflicted areas across the globe.  To maximize its climate change capability, Monsanto must heighten public awareness and demonstrate how its innovation in agronomy has impacted society for the better.

Specter, M. (2013, November 3). Why the Climate Corporation sold itself to Monsanto. Retrieved from The New Yorker: https://www.newyorker.com/tech/elements/why-the-climate-corporation-sold-itself-to-monsanto