Mars is one of the largest food manufacturers in the world with estimated sales of over $30 Billion USD per year. The company employs over 75,000 people and operates in over 70 countries.[i] Mars relies heavily on global agriculture to produce a range of products from confectionary food, most notably chocolates like M&Ms, to pet food like Iams or Pedigree.[ii] Given the scale of the business both as a consumer of raw materials and as a producer of carbon, it’s clear that Mars needs to strongly consider the alarming rate of change in climate.

Effects of Climate Change on Mars

Mars is reliant on about 100 primary agricultural products produced around the world. Cocoa, the primary ingredient in some of the company’s most heavily consumed products is sourced from countries mainly in West Africa and is negatively affected by rising temperatures and dryer climates.[iii] Studies have shown that farmers in West Africa will begin to see declines in cocoa yields as early as 2030 and the areas that are currently suitable for farming the crop will decrease significantly.[iv] By 2050, the impact of a global temperature increase of 2° C will have devastating effects to the region[v]: 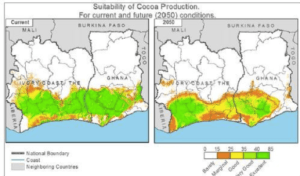 Although other areas may therefore become more suitable for cocoa trees, the net effect on the supply chain could cause massive inefficiencies for Mars and drive a much higher commodity price for the business. This doesn’t even take into account the most tragic cost, which would be the displacement of thousands of West Africans who rely heavily on farming cocoa as a means to survive.

What Mars is Doing About It

Since 2007 Mars has implemented the Sustainable Sourcing Program. By 2014, the program covered 23 raw materials used by the company, which accounts for 60% of their sourcing volume. The Sustainable Sourcing Program is defined through 5 impact areas: GHG, land use, water, human rights and income. Of the three of these related to climate change, each has a definitive set of goals and has made moderate to impressive progress since 2007[vi]:

Some of the notable methods Mars has used to achieve it’s environmental goals has been converting to more renewable energy, increasing the use of recyclable packaging, eliminating landfill waste, and driving more operational and capital efficiency.

In addition to taking direct action within their own operations, Mars has also taken a leadership role within the global food and beverage community. In 2016, CEO Grant Reid signed a letter with nine other major food companies pledging to take action combating the effects of climate change and committing to become an advocate within the business community.[vii]

While I’m very impressed with many of the operational changes Mars has made and commits to make in order to change the trajectory of global climate change, I’m still somewhat alarmed at how challenging it seems for the company to fully track the state of this progress within it’s supply chain. For example, given the fact that land use plays such a major role in the net effect of GHG emissions, it would seem like the ability to trace the supply chain through the Deforestation policy would have to be a priority. As mentioned in the table above, after nearly eight years, Mars is still not 100% confident that the initial raw material, pulp and paper, is being produced without damaging forested areas. Although I can imagine it’s incredibly complex to gain visibility into all sources of materials used for such a massive business, it seems that in addition to taking direct action in Mars controlled facilities, leading by example means enforcing high degrees of responsibility from suppliers on this issue and that begins with being able to accurately account for the impact these partners have on the environment.

While We Wait on Human Psychology, Let’s Find Another Way