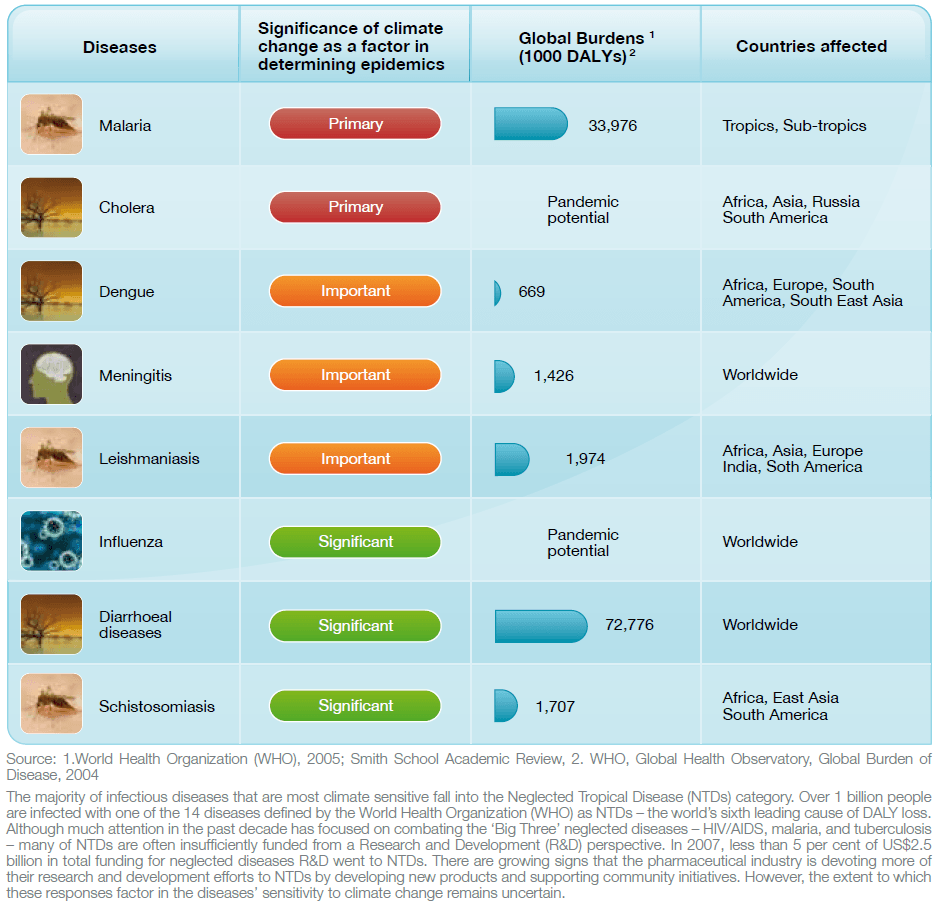 Malaria – a mosquito-borne infectious disease that infected 214 million and killed 438,000 people in 2015 alone [1] – is particularly sensitive to climate change, with epidemics highly correlated to extended periods of increased rain and temperature. Anopheles mosquitoes, responsible for spreading malaria, mostly exist in tropical and subtropical regions around the equator (Sub-Saharan Africa, Asia and Latin America). As warmer temperatures and more extreme weather events from climate change have shifted this “malaria belt” to higher altitudes or regions that were once more temperate [2,3], different populations have become vulnerable to this deadly disease, prompting a rapid call-to-arms to address this global public health issue. How can pharmaceutical companies respond to the growing need for antimalarial treatment and sustainable practices while still operating as profit-driven businesses?

Adapting to Climate Change with Drugs

GlaxoSmithKline (GSK), one of the largest global pharmaceutical companies, has taken the lead to tackle the proliferation of malaria. Recently hailed as Fortune’s 2016 top “Change the World” company, GSK faced the challenge head-on by developing the first vaccine for malaria, a notoriously difficult endeavor given the plasmodium falciparum parasite’s ability to quickly adapt to the human immune system.

After 30 years of research and clinical trials supported by the Gates Foundation and public-private partnerships, GSK’s Mosquirix (RTS,S) anti-malarial vaccine was granted a positive scientific opinion by the European Medicines Agency in July 2015. In January 2016, the World Health Organization (WHO) announced a pilot program for the roll-out of Mosquirix to sub-Saharan Africa to be used in conjunction with other malaria control measures such as bed nets and insecticides [4].

In an effort to not price out life-saving treatment to those in need, GSK announced in March 2016 that it will no longer patent drugs in the lowest income countries [5]. Keeping this commitment, GSK agreed to set not-for-profit prices for its breakthrough antimalarial vaccine and promised to reinvest the 5% margin on top of manufacturing cost into further R&D for treatments of tropical diseases, many of which are at risk of increased epidemics due to the impact of climate change. 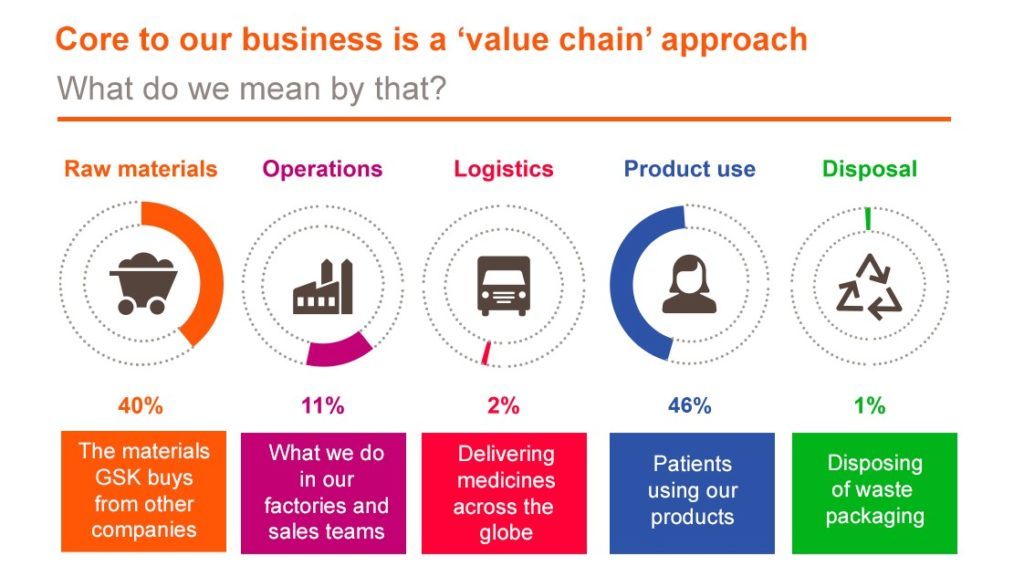 GSK’s mission to “help people do more, feel better and live longer” goes beyond its breakthrough medical innovations. Core to GSK’s business is also its sustainable value chain approach to reducing its carbon footprint in raw materials, operations, logistics, product use and disposal. Since 40% of GSK’s carbon footprint comes from raw materials as shown in the graphic above, GSK and its hundreds of suppliers use an online platform called EcoDesk to gather data on carbon, water and waste and then prioritize efforts to reduce the supply chain’s environmental impacts. Over £1 billion of raw materials used in manufacturing and R&D are tracked on this system in combination with the GSK Supplier Exchange Forum that enables sharing of best practices.

Through GSK’s sustainability initiative, 60% of GSK sites have already achieved its zero waste to landfill target (100% goal by 2020). GSK focuses on not only cutting carbon in operations and products such as antibiotics and inhalers but also using less water in research labs and manufacturing sites. GSK has also dedicated significant resources to increase recycling of its products by patients and consumers, especially for inhalers that have trace amounts of greenhouse gases after use. New disposal programs in UK pharmacies led to over 500,000 inhalers properly recycled in 2012 and GSK can continue to innovate new ways to reach its ambitious environment targets [6].

Next Steps for a Greener and Healthier Future

GSK has made significant progress in achieving a principled balance of scientific innovation, social impact and profitability. While its internal operations can continue to improve its carbon footprint, the company should also invest more in making its drug products more greenly packaged and distributed. In a world where pharmaceutical companies are held to increasingly higher standards for not just financial performance but also overall benefits to society, GSK needs to strengthen its drug portfolio and R&D pipeline to address broader health impacts from climate change. The company should also prepare defensively so that it can nimbly respond to shocks in supply and demand for its own raw materials as well as the treatments it sells. With GSK’s leadership in scientific innovation and social impact, it should seek to expand its influence via more partnerships with NGOs and public/private foundations.

GSK can help accelerate medical innovation and increase public engagement, education and advocacy for a greener and healthier future.

How Climate Change Is Impacting An American Icon: Heinz Ketchup

Student comments on Malaria: A Hot Mess in a Hot World