New digital technologies are disrupting the business of companies in many sectors and with no surprise also banks are facing the rising challenge represented by the so called “fintechs”, start-ups that use technology to provide financial services. One of the most adopted innovations in this space is the so called Marketplace Lending (MPL), a service that matches lenders directly with borrowers through an online platform, without the intermediation of a bank. The first of such platforms to be launched worldwide are Zopa (UK, 2005), Prosper (US, 2006) and Paipaidai (China, 2007) [1].

Let’s give a closer look at the differences in the MPLs business and operating model compared to the traditional lending system.
In the traditional lending model, banks take risk onto their balance sheets and generate income managing spreads between the interest charged on loans and the one paid on savings. MPLs, instead, do not take deposits or lend themselves, they act as intermediary between the lender and the borrower and therefore take no risk onto their balance sheets. They do not earn an interest income, but rather generate income from fees and commissions received from borrowers and lenders for services provided to both parties. Those services include providing the online platform to enable borrowers and lenders to match, developing credit scoring and pricing models, performing borrower credit checks, processing loan payments, providing customer service and ensuring legal compliance.

The main elements of the customer value proposition – where customers are both lenders and borrowers – are hence: 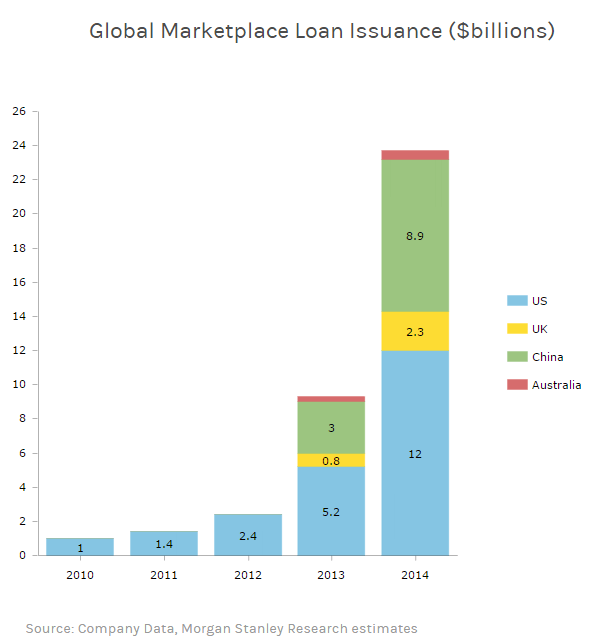 A Morgan Stanley research revealed that the risk of disintermediation by non-traditional players are present in all the main lending sectors (i.e. consumer lending to commercial or student lending). In all, banks earned ~$150bn in 2014, and $11bn+ (7%) of annual profit could be at risk from non-bank disintermediation over the next 5+ years [3].

Is this a big threat for the traditional lending systems? Probably the original fear of disruption in the industry has lowered, but traditional banks realized that customer needs and expectations are changed due to the service level provided by those players and the focus has shifted to collaboration.
Early adopters banks have chosen to partner with fintechs rather than buying or building their own platform. Goldman Sachs instead was the first US bank to adopt a more radical approach and last month launched its own MPL platform: “Marcus”.
The Bank had to make several adjustments to its business and operating models in order to enter the MPLs consumer business:

Obviously, this is just the beginning of a risky experiment for the Bank. Only time will tell us if their in-house strategy will be successful and they will be able to act as a fintech after having spent most of the past 150 years serving wealthy individuals and corporations. Implementation improvements and additional initiatives could be adopted to leverage its first move in the arena:

Times of pure traditional lending are over, and if any doubts are left, let’s consider Goldman CEO himself recently hosted a podcast where he described Goldman as a tech company with 9,000 developers [6]. (791 words)

Student comments on Lending in the digital era: Goldman Sachs embraces the challenge