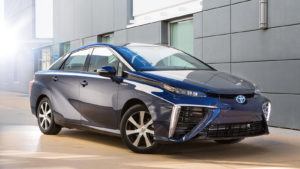 Toyota’s operations have been fundamentally affected in two main ways by climate change: 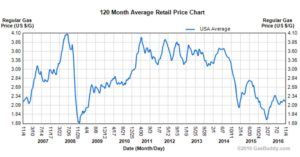 As an automotive producer, Toyota is vulnerable to the fluctuations in the price and supply of fossil fuels. Higher and more variable costs of fuel for vehicle operation, in addition to other factors such as worsening urban air quality, have been increasingly influencing consumers to favor lower-carbon automotives.

In addition, states such as California are increasing the tax rate imposed on traditional gasoline, causing cost-conscious consumers to look even more to alternative-fuel vehicles [1].

Tougher greenhouse gas emissions regulations is also challenging Toyota and the rest of the automotive industry. These regulations include:

In addition, in 2015, the Japanese government announced subsidies for hydrogen fuel-cell vehicles and for the development of hydrogen fueling stations across the country (California has committed to building stations as well) [4].

Lastly, the Volkswagen diesel-emissions cheating scandal has resulted in intensified scrutiny of auto emissions, and  the collective outrage that resulted can be taken to demonstrate that consumers are caring more about violations of emission regulations nowadays than ever before.

Toyota is responding to these shifts in two major ways:

Doubling down on commitment:

Toyota is extremely committed to driving sales of its fuel-efficient/alternative-fuel vehicles (including gas-electric hybrids, plug-in hybrids, fuel-cell cars, and electric vehicles) – in fact, it hopes that sales of traditional gasoline- and diesel-engine cars will be near zero by 2050. As Senior Managing Officer Kiyotaka Ise said in late 2015,

“It won’t be easy for gasoline and diesel cars to survive…it’s like the world is turning upside down and Toyota has to change its ways.” [5]

In addition, Toyota has committed to a 2050 global environmental challenge to eliminate carbon emissions in all of its operations, not just from the cars that they sell. 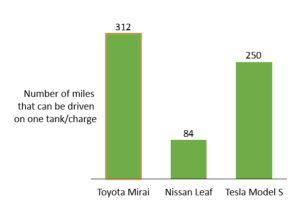 Toyota is trying to position itself as one of the foremost innovators in using technology to reduce harmful greenhouse-gas emissions. In 2015, Toyota started selling the Toyota Mirai, a hydrogen fuel-cell car that emits only water, plus has a longer driving range than other competitor alternative-fuel vehicles. As mentioned above, these fuel-cell vehicles will help Toyota earn emission credits under California and US regulations [5]. While the company is positioning itself well in this new environment, there is one main way that Toyota can continue to do better:

Adoption of fuel-efficient cars has been gradual and slow – Toyota can speed up the rate of adoption by investing more into building out the supporting infrastructure, primarily charging and filling stations for electric and hydrogen vehicles. Lack/scarcity of this infrastructure has prevented consumers from adopting these vehicles on a large scale.

Currently, there are significant hurdles to fuel-cell vehicles becoming a viable options for mass-market consumers. There are only a handful of hydrogen refueling stations in the US, mostly on the West Coast [6].

The Toyota Mirai is also cost prohibitive to the vast majority of would be consumers. Toyota’s mid-sized gasoline sedan known as the Corolla in the United States, comes with a suggested price tag of $18,500, and sold an estimated 363,000 units in the United States, and more than 1.3 million world wide. The Mirai retails for more than 3 times a Corolla and has far fewer fueling options. For the Mirai to gain wide-spread acceptance both of these factors will need to be mitigated. [7]

Hearing the Cry of the Orangutans: Unilever and Sustainable Palm Oil

Vail Resorts Could Be Doing More

Student comments on Launch of the Toyota Mirai