A few big names come to mind when analyzing the climate change debate, namely Al Gore, Bill Gates, and the Koch brothers. Charles and David Koch each own 42% of Koch Industries, founded by their father Fred C. Koch, and continue to this day to act as the reigning Chairman & CEO and Executive VP, respectively [1]. While the Koch brothers have been often lambasted for being global warming deniers (cumulatively since 1997, the Koch brothers have donated nearly $89M to denying interest groups), the story is much less clear with the company they run, Koch Industries [2].

Koch Industries is a privately owned company that has diversified into a dizzying number of markets: energy, chemicals, consumer products, agriculture, construction, pollution control, complex electronics, and commodities are just to name a few [3]. Within each segment, the proliferation continues. For example, within the energy sector Koch Industries operates, invests and trades in petrochemicals, refining, mining, biofuels, renewables, foresting, and the list goes on and on. For such a diversified company, the question for Koch becomes ‘How do we respond to business environment changes at the company level versus at the portfolio level?’ Given that climate change is just one of the many globalized changes Koch Industries must keep its eyes on, we’ll look at just a sample of firm-level drivers below.

Climate Beta – While many of Koch industries businesses are exposed to climate change risk, Koch industries at the portfolio level is additionally exposed to global variability, on an individual business basis. For Koch to sustain performance, they can de-risk by diversifying their portfolio along a climate-change dependency axis. There is considerable evidence that Koch is already deploying this strategy currently, for example running pollution control equipment retailers in the same active areas as its fossil fuel production and exploration companies [3]. Should regulation lean one direction or another in a given political cycle, Koch industries has the ability to influence and adjust this balance from the lobby and operational ends of their business. Recommendation: Koch Industries should further diversify global and industry coverage based on individual companies performance links to climate change. 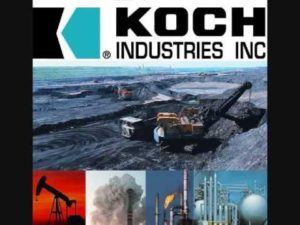 Technological frontier – In a recent Washington Post article, Charles Koch presented arguments that seemed to contradict his documented donation history. “We’re investing heavily in biofuels, in biotechnology, in information technology, to [remain competitive] [4].” This statement may indicate a contradictory approach to innovating against climate change within Koch Industries. An example being the Koch Nitrogen Co.’s new ability to re-inject byproduct CO2 back into the ground at nearby Koch gas wells, sequestering over 600000 tonnes of CO2 production while improving gas well production[4]. These win-win situations could represent a unique way for Koch Industries to drive efficiency in its existing portfolio of companies, while planning to be more sustainable for the decades to come. Recommendation: Increase cross-company projects bridging between firms that are curtailed due to climate change regulation and firms that trade off the incentives of climate change regulation. Invest in renewable technologies as a hedge in-case policies change that do not favor existing energy businesses.

Public forum – By lobbying and speaking out against global warming, the Koch brothers have taken a public stand on an uncertain future. As with any large future uncertainty, operationally they must act as corporate officers to see all possible outcomes and preserve the value within the Koch Industries company. I think they have made a big bet that policy will not catch up with the existing warming trends that we are seeing today [3] [4]. If they are wrong, they will face a serious period of competition from firms who have made greater investments in renewables and lower carbon-emission strategies. Recommendation: Charles Koch and his successor need to take their face and name out of the public conversation relating to this shift in our global climate. While personally passionate about global warming, those biases do not belong in the operation of Koch Industries. Given, Koch is a private company and the Koch brothers can do what they want with it, it behooves their financial interest and they employee’s trust to take a step back and prepare for all possible outcomes [1]. 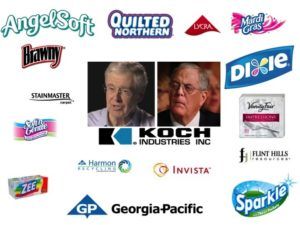 With such a controversial personal position, the Koch brothers certainly have their work cut out for them to lead a company of 100,000 workers deep into the 21st century [5]. IF we assume that Koch Industries is here to stay for another 75 years of operations, how will their diversification look then? Given, Charles Koch has said that Koch Industries will go public “over my dead body”, we may have a bit of a wait before we get so see the real financials. Can we safely assume that a younger Koch will step up to fill Charles’ shoes, both in the boardroom and in the public forum speaking against climate change? Only time will tell.

Sustainability at H&M: Cleaning Up Its Act

Student comments on Koch Industries: Whose side are you on?