KiOR started as a joint venture between Khosla Ventures and a small Dutch start-up called BIOeCON. BIOeCON had developed a revolutionary ‘Biomass Catalytic Cracking Process’ (BCC). This technology converts biomass, like grass and wood, into a bio-oil product that can be further upgraded to transportation fuels. [1] 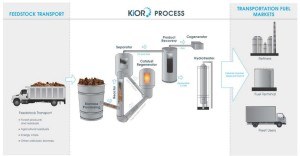 The initial business model called for the technology to be licensed to big oil companies – who had a lot of the infrastructure in place to conduct the chemical reactions. However, Khosla Ventures did not want to sell, since they saw an opportunity to create a standalone biofuel behemoth that would rival oil companies like Exxon. [3]

However, two subsequent decisions did not allow the business and operational model to coexist well. Firstly, as the company tried to scale up, they hired dozens of researchers with PhDs, while not recruiting people with operational backgrounds who actually had facilities experience. KiOR was in essence, a network of very smart chemistry researchers. This was an operational decision that severely impacted the company’s ability to execute its business vision. Indeed, even though the first production factory opened in May 2011, the first fuel was not manufactured until November 2012. The factory had numerous production issues. Some of these included the woodchip conveyor system breaking down frequently, and the cleaning system clogging up with a tarlike substance. Operating expenses sky-rocketed, but the researcher-heavy workforce at the plant were unable to fix the problems and reach a steady state production volume. [3]

Secondly, the company made the business decision to go to go public before they had even starting producing a product. This put undue stress on the company as it was to the microscope of the broader market and SEC. In its IPO filing, KiOR claimed that it could convert one ton of biomass into 72 gallons of fuel, however, in reality the process was not nearly as efficient. As the company struggled operationally, it got no relief as they were forced to repeatedly report overwhelmingly underperforming results to the street – which further shone a spotlight on how the company was actually operating on a day-to-day basis at its factory. [4] Eventually, the company unraveled completely. A whistleblower filed a complaint that the internal yield rates were not close to the reported figure of 72 gallons, and the 2013 Q3 production numbers were just 25% of the forecasted volumes. The company was eventually forced to file with the SEC for bankruptcy. [3]

The tale of KiOR highlights the difference of the business vision of the VC as compared to the operational capabilities of the founder. BIOeCON was probably on the right path when they were pursuing a licensing route to commercialize their intellectual property. This would have allowed the founders to continue improving the chemical process without worrying about scaling up the technology. As for Khosla Ventures, they were too enamored with a long-term vision, and failed to see the operational challenges that were present right before them.  This mis-alignment of the business model and operating model ultimately contributed to the demise of KiOR.