The apparel industry and its role in climate change

The $3 trillion global apparel industry is responsible for 10% of global carbon emissions, making it the second largest industrial polluter and contributor to climate change after the oil industry.[1] In 2015, the industry was projected to have used 100 million tons of fiber and filament yarns.[2] Polyester, the world’s most commonly used fiber, requires nearly 70 million barrels of oil to produce. Other fabrics, including rayon, require logging 70 million trees every year, which also contributes to climate change by preventing photosynthesis, a process that removes carbon from the atmosphere.[1] The physical manifestations of climate change, which have in part been created by the apparel industry, have created both threats and opportunities for apparel companies including Nike.

Pressure on input prices and availability

Global warming has led to changes in the rates of rainfall, runoff, and evaporation, causing unexpected floods and droughts.[3,4] Droughts are a significant threat to Nike as they can lead to reductions in crop yields and thus increases in the price and scarcity of commodities that are necessary for apparel production such as cotton. Water scarcity, which also results from climate change, is detrimental to Nike.[5,6] In general, it takes more than 400 pounds of water to process one pound of textiles due to the water-dependent dyeing and finishing steps.[2] The fact that apparel manufacturing is concentrated in a few areas in the world further exacerbates water stress levels.

As was evidenced in 2008 when four Nike factories in Thailand were shut down due to floods, such manifestations of climate change disrupt the apparel supply chain.[7] Climate change has also been linked to political instability due to increases in food prices and resulting riots.[8] Such riots, which have occurred in countries like India and Argentina where Nike has factories, may also contribute to supply chain disruptions.[8,9]

Lastly, global warming has diminished the apparel industry’s buying and manufacturing cycles since apparel purchases are partly influenced by changes in seasons (in countries with seasonality).[10] Although Nike’s emphasis in active apparel partly protects the company from the impact that other retail companies that produce seasonal apparel may experience, Nike may still need to adapt to new consumer behavior. 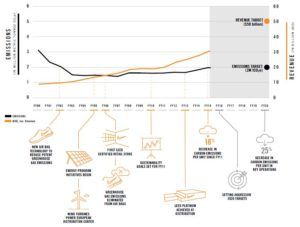 Since its use of renewable energy in 2005 and elimination of greenhouse gases from air bags (on Nike Air shoes), Nike has continued to take measures and set aggressive goals to reduce its carbon footprint. More recently, Nike signed on to the White House climate change pledge to reduce its carbon footprint and partnered with the Massachusetts Institute of Technology Climate CoLab, a crowdsourcing platform “where citizens work with experts and each other to create, analyze, and select detailed proposals for what to do about climate change.”[12,13,14] Nike’s goals for 2020, including reaching 100% renewable energy in operating facilities by 2025, are shown in Figure 2.[11] 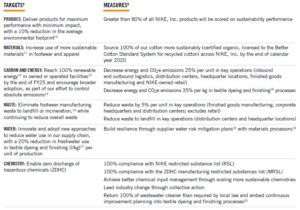 Nike’s commitment to sustainable practices in response to climate change has likely helped drive its steady increase in revenue.[11] This is supported by studies that have shown that Millennials consider sustainability to be a shopping priority.[15] Furthermore, measures such as switching from naturally-derived inputs to synthetic products protect Nike from fluctuations in commodity prices and availability, while switching to renewable energy and reducing waste will enable Nike to experience long term cost savings.

Next steps for Nike

Most of Nike’s efforts to mitigate its impact on climate change are actions that also serve another purpose: marketing. If Nike wants to position itself as a company that genuinely cares about sustainability, I would advise Nike to not only pursue high visibility goals such as reaching 100% renewable energy, but to also address important yet subtler problems. For example, this could entail reducing CO2 emissions by more than the target decrease of 25% by moving more factories nearshore to reduce the carbon footprint that results from transporting products. Nevertheless, in a world of increasing climate change issues, Nike has been a leader in proactively addressing its contribution to global warming and serves as an example of strong corporate stewardship that other companies should follow.

Climate Change and the Future of General Mills

Student comments on Just do it: Carving the path to sustainability