Will Patagonia be able to maintain its advantage, as the premier producer of environmentally conscious clothing, over its competitors as more apparel companies begin to adopt similar sustainability programs?

Luckily for Patagonia, their founder Yvon Chouinard, gave them a multiple decade head start by creating Patagonia in 1973 [1].  Patagonia’s mission statement sets them apart from other apparel companies when it states, “Build the best product, cause no unnecessary harm, use business to inspire and implement solutions to the environmental crisis [2].”

Combating climate change at the forefront of ethical business strategy has continually been a core principle to Patagonia, but as their business continues to grow and their products become more popular, maintaining those fundamental principles of a minimalist style will become more difficult.  Yvon stated in his book, The Responsible Company, “We have borrowed from nature what we can’t pay back [3].”  Patagonia has continued to find ways to reduce their environmental impact, but that pressure has been compounded by the growth of their business over the last three years.  Patagonia is a private company that provides minimal insight about their financial performance, but on January 3, 2012, Patagonia became the first company in the state of California to formally register as a benefit corporation [4].

Additionally, since 1985 Patagonia has donated 1% of their net revenues to nonprofit organizations to preserve and restore wild places.  In 2002, Yvon established the nonprofit, 1% for the Planet, which has encouraged over 1,200 other companies to share Patagonia’s commitment to the environment by donating at least 1% of their annual sales to environmental causes [4].  As a benefit corporation committed to donating 1% of their annual sales, Patagonia provides details about the amount of money they donate to nonprofits which can provide estimates of the company’s annual revenue.  In 2013 Patagonia donated $5,602,433 to 773 nonprofit organizations that promote environmental conservation and sustainability [5].  Patagonia’s estimated 2013 annual revenue is about $560mm.  After two years of growth Patagonia reported a donation amount of $6.2mm at the end of FY 2015, resulting in an estimated annual revenue of $620mm [6]. 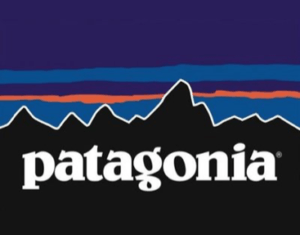 Patagonia finds itself in a dilemma where they try to maximize revenue which in turn leads to donating more money to environmental causes, but as their sales grew 9.7% over two years, one can assume they sold more items which contributes to additional harm to the environment.  Generally speaking, the textile and apparel industries make up about 10% of global carbon emissions, and it takes about 200 tons of water to make one ton of fabric [7].  Patagonia is also in a predicament between functionality and fashion.  The company’s founding values and mission statement are in stark contrast with a portion of their current market of customers who buy their products in excess of their basic needs.  Yvon described his contempt with this form of customer behavior when he wrote, “As of this writing, two-thirds of the U.S. economy relies on consumer spending…Much of what we produce to sell to each other to earn our living is crap…We’re wasting our brains and our only world on the design, production, and consumption of things we don’t need and that aren’t good for us [8].”

Patagonia ran a campaign in 2011 titled, “Don’t Buy This Jacket,” because they identified the negative environmental impacts outweighed the benefit of producing the jacket.  The company explained that manufacturing and shipping one of the jackets the campaign referred to required 135 liters of water and generated about 20 pounds of carbon dioxide [9].  Two years later Patagonia reported one of their two FY 2013 Short Challenges is that, “Not all of our products are made using low impact (environmentally friendly) materials [10].”

Currently Patagonia is at the forefront of Corporate Responsibility by, “…taking responsibility for the impact of their activities on customer, employees, communities and the environment [11].”  One of the many aspects that Patagonia has focused on in the past two years is to ensure the humane treatment of birds that supply their down.  Starting in the fall of 2014 the company began to only use 100% traceable down [12].  Many other production techniques that Patagonia uses to ensure an environmentally responsible consumer product include; the sole use of organic cotton since 1996, in 1993 they adopted fleece in their product line made from post-consumer recycled plastic soda bottles, undyed cashmere which lessens the use of water and chemicals, and they developed a supply chain for new wool to reflect high standards for both animal welfare and land management [13].

As Patagonia has become the industry leader in setting environmental standards in the production of clothing, there are always areas for an organization to improve.  Some improvements that Patagonia can focus on include; further education of customers, recruiting more companies to participate in 1% for the Planet, invest in other companies and developing technologies that can positively impact the whole industry [14], identify products that will not be sourced at a sustainable level within three to five years and eliminate them from their product line, and continue to encourage customers to take proper care of and repair their garments to reduce the repurchasing of similar items [15].  Patagonia’s fundamental values over the last 40 plus years are a testament that a company can be profitable and environmentally conscious at the same time, and the external pressure they continue to place on the apparel industry is one that can be commended but continually improved.

Fish Out of Water?

Nestlé: Conserving Water as a Strategy to Sell More Water

Student comments on Is your fleece made of recycled plastic bottles?