Over the past decade, US import tariffs on tires have been in flux which can complicate the supply chain of tire manufacturers. Goodyear, the largest multinational tire manufacturer in the United States, operates 48 manufacturing facilities in 21 countries and groups these geographies into 3 segments: Americas, Europe, Middle East, and Africa (EMEA), and Asia Pacific. As each segment exports to the other segments as part of a global supply chain, import tariffs are a risk which Goodyear must watch and plan for strategically [1].

In June 2009, the United States International Trade Commission (USITC) responded to a petition by the United Steelworkers (USW) and decided that the rise in tires imported from China was causing a decline in the volume, market share, and employment of the US tire industry. In response the US implemented temporary anti-dumping (when foreign manufacturers sell goods in the US at less than fair value) and countervailing (when foreign governments provide assistance or subsidies to manufacturers that then export goods to the US) tariff safeguards through 2012 on passenger vehicle and light-truck tire products.

Goodyear, as well as other companies, responded by importing tires from other countries. Imports from China plummeted (see figure below), but imports from South Korea, Thailand, and Indonesia offset the loss. For Goodyear, although they operated a plant in China, they also had plants in India, Indonesia, Japan, Malaysia, and Thailand as well as six plants in the United States. Keith Price, Goodyear’s director of national media, responded saying that the tariffs “had a minimum impact on us” and that Goodyear’s tires are higher quality so they don’t compete with Chinese imports [2]. With the tariffs, however, tire prices went up and economists estimate US consumers spent $1.1B more on tires [3]. After the tariffs expired in 2012, the USW newly petitioned the USITC in 2014 to impose tariffs on Chinese tires. US officials gave a “preliminary” decision to again impose tariffs and tire prices quickly rose up to 15% [4]. 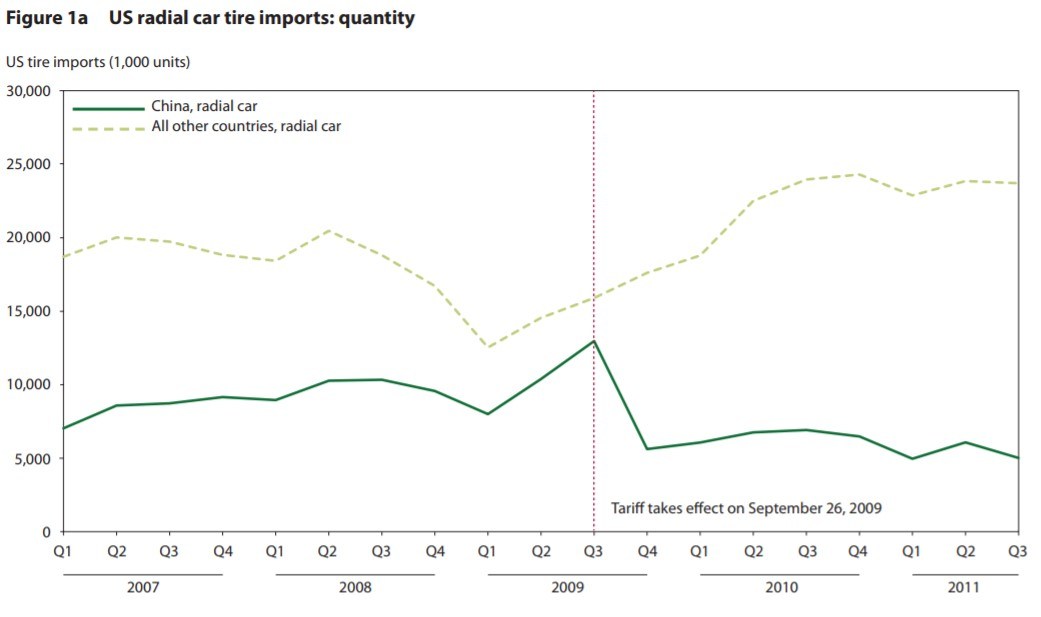 The year 2017 continues to bring complexity for Goodyear’s supply chain. In March 2017, the USITC admitted they had erred in their calculations of countervailing duties and would no longer assess tariffs on bus and truck tires from China [6]. Also, the Trump administration has made several statements declaring intentions of renegotiating the North American Free Trade Agreement (NAFTA) and exiting the Trans-Pacific Partnership (TPP).

In the short term, Goodyear is still investing in its global footprint. In the beginning of November 2017, the first Goodyear plant built in the Americas in 25 years was officially operational as the $550M tire plant in San Luis Potosi started producing [7]. Goodyear doesn’t appear to be worried about changes to NAFTA. Keith Price says, “We continually look at our manufacturing footprint, and our strategy is to produce tires as close as possible to where we sell them. The vast majority of tires we sell in the U.S are made in the U.S. We’re not anticipating making any near-term changes to our current manufacturing footprint.” [8] Goodyear is also in the process of closing plants in Philippsburg, Germany and Wolverhampton, U.K as part of its EMEA restructuring as well as expanding its manufacturing facility in China [9].

For the next decade, Goodyear appears to be planning for business as usual. “If you’re monitoring the news, it changes daily. It’s probably best not to speculate but to wait and see what they (the Trump administration and the new Congress) want to do” says Price [7]. Executive Vice President Laura Thompson says of the trade situation, “We take no position at Goodyear. We are a global tire company. We play globally” [4].

In the short term, I recommend that Goodyear stay politically neutral. Although a mock poll conducted by the Tire Industry Association showed that 56.8% of the Global Tire Expo attendees support Trump, Goodyear needs to take the middle ground as they are an American company with a large, global footprint [7]. Over the next decade, I recommend that Goodyear reopen its plant at Wolverhampton or open a new plant in the U.K. as Goodyear no longer manufactures tires in the UK and the looming Brexit could make importing tires more difficult. I also recommend that Goodyear engage in more hedging of raw material costs as rubber went up 75% in cost since August 2016 due to commodity speculators in China, and Goodyear has already had to raise prices and pass these costs onto consumers [10].

[8] Aguilar, Mike. 2017. “Tires And Trump: What The New President Means For Us”. Traction News, 2017. http://www.tractionnews.com/united-states-tire-industry-reacts-to-president-trump/

Student comments on Is Goodyear’s Supply Chain Designed to have Good Years in the Future?