Iron Mountain (“IRM”) provides physical document storage, information management, and document shredding services. With an estimated ~60 market share, Iron Mountain is the clear leader in the ~$7bn global document management industry[1]. ~40% of IRM’s revenue comes from services (including document retrieval and shredding of paper), most of IRM’s revenue (60%) comes from paper/box and digital data backup media storage business[2].  Historically, the storage business was characterized as being acyclical and was relatively stable through the wider business cycles[3].  The stability was driven by two main factors: (a) Paper records are typically stored for a long time (the average lifetime of a box is 16 years) (c) regulations (according to IRM, data may be discoverable in legal or regulatory actions which forces companies to save physical data for years on end[4]). 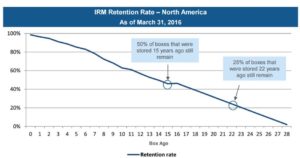 It seemed that IRM’s business was in destruction and would enjoy years of continued stable growth. However, it did not adequately foresee and anticipate the risks that technology would bring to its core business model.

Technology fundamentally changed the business landscape in which IRM operated. As mentioned above, IRM depends on the continued usage of paper both for the physical storage of the documents and the shredding of it. With the advent of the internet and proliferation of email and computer usage, paper use is in decline. The trend towards electronic records is real and with less physical documents being produced, national paper usage is declining ~4% per annum[5]. Coupled with that some companies are turning to storing their data in the cloud since it can be more an efficient and cheaper alternative to physical document storage. Within the past few years, an increasingly number of companies are offering their cloud storage services at lower prices (for example, between 2013 and 2014, Amazon Web Services has decreased by 40% the rate it charges customer to store Terabyte of data[6]).

Difference between Cloud and Physical Storage

Prior 2011, it seemed that IRM was attempting to adjust to this new landscape with its Digital Services business line which offered various solutions for online backup and file recovery tools (similar to AWS, dropbox, google drive, etc).  However, in 2011, IRM sold the segment and decided to concentrate on its core business of storage and protection of physical documents and media[7]. IRM had been unable to manage its customers expectations in digital given their lack of core competency in digital[8].

A Sense of Urgency

Given this new environment, IRM is taking steps to better position themselves.  While it unlikely they will re-enter the pure digital storage space, there are still ways to better utilize technology and expand their data management product offerings in order to drive revenue and remain competitive.

Still more to be done….

IRM needs to be doing more to adapt to this changing environment.  They are moving too slow and are failing to realize that the advantages they joined in the past are gone.

How EA’s FIFA Changed the Game