In 2011, the insurance industry suffered record-setting losses of $105 billion in natural disaster-related claims. This was driven primarily by a mix of earthquakes in Japan and New Zealand, flooding in Thailand and Australia, as well as tropical storms and tornadoes in the U.S. While this may seem like a one-off incident, aggregate weather-related losses (i.e. including uninsured losses) around the world have risen from an annual average of $50 billion in the 1980s to over $200 billion over the past 10 years. 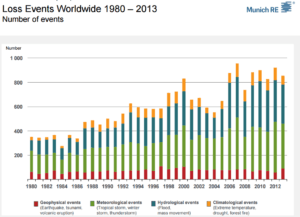 Moreover, the number of events has increased from less than 400 a year in the 1980s to an average of nearly 800 a year, as shown in the exhibit below. 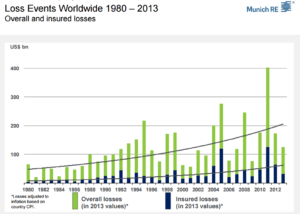 Lloyd’s, an insurance market established in 1688 when merchants first bought insurance for their cargo ships, is one of the oldest insurance organization in existence today. However, it wasn’t until the 2014 US National Climate Assessment report came out that Lloyd’s for the first time called on its constituencies to incorporate climate change into their catastrophe models. Catastrophe modeling, or “cat models,” is a relatively young field that combines actuarial science with the geological study of natural hazards. Commercially available models were not available until 25 years ago, and the early models were of such low sophistication that the 1992 Hurricane Andrew resulted in the immediate insolvency of 11 insurers in the United States. A catastrophe model essentially uses certain vendor-specific data and assumptions relating to vulnerability and hazard risk of natural disasters, and takes as inputs the insurer’s financial exposure and coverage location to determine the potential risk of the book (see exhibit below). 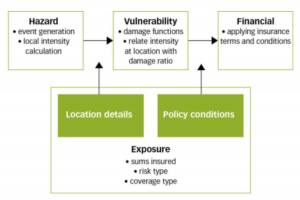 However, while older catastrophe models were backwards looking and relied heavily on historical data to extrapolate probabilities, researchers have begun to investigate how to incorporate forward-looking climate change data in evaluating the potential size of losses. For example, a study by Paul Wilson, senior director of model development at Risk Management Solutions (RMS) showed that the impact of sea level changes over the past 50 years drove a 30% increase in New York City’s losses from Superstorm Sandy in 2012, something that would not have been factored into older catastrophe models. Another equally compelling paper by James Elsner from Climatek suggests and estimated 5% per year increase in losses due to changes in sea-surface temperatures, which is a key driver of hurricane activity in both the Atlantic and Pacific oceans. Lastly, a study by Professor Lamb, Chief Scientist of JBA Group showed that there was at least a 20% increase in the likelihood of floods in the UK at the same magnitude of as the winter 2000 flood, with all the increase being attributable to human-induced climate change. Ultimately, given the duration of many catastrophe insurance contracts (many of which are multi-decade), it is essential that insurers like Lloyd’s are able to better understand and forecast how changes in global climate will impact future risks.

On a more positive note, climate change also presents significant business opportunities for insurance companies. For example, given the billions spent and expected to be spent on clean energy technologies, this will be a significant new capital base requiring various insurance functions. Some large insurance companies have already begun to build out divisions dedicated to servicing these functions, such as AIG’s Global Alternative Energy Practice. This is an area that Lloyd’s constituencies are still currently lacking in, as most continue to focus on more traditional property and casualty and reinsurance businesses. Other innovative insurance products that Lloyd’s and other insurers should look into relating to energy and climate change include “green building” insurance, or insurance for renewable energy and energy efficient projects. Another area of opportunity would be micro-insurance, where companies can offer weather-related insurance to small individual farmers in the developing world who currently lack access to traditional hedges and insurance options but are heavily affected by climate change.

Ultimately, insurers such as Lloyd’s should take a two-pronged approach when it comes to thinking about climate change—build greater sophistication into their models to incorporate higher potential future losses, and think about new insurance opportunities generated by climate change and the push towards clean energy.

Climate Calling! Airtel India and ICT in the Age of Global Warming