In early December 2015, nearly two hundred key government officials from around the world gathered in Paris for the 21st UN Climate Change Conference. Nearly a year later, 94 nations ratified (and 192 signed) an agreement to limit an increase in the average global temperature to 2° Celsius and it entered into force.(1)

Although the conference itself received much press, there was a lesser known group of supporters rallying for the cause from the retail sector. A declaration issued to UN officials to ratify the agreement was signed, among others, by top executives from Levi’s, Adidas and the CEO of H&M, Karl-Johan Persson.(2)

This may seem ironic, as building an international, multi-billion dollar fashion empire that uses (and arguably wastes) natural resources to create every product is hardly compatible with the UN’s green agenda. But Persson has decided to argue otherwise and H&M is committed to integrating the two goals.

Going Green from Within

Although H&M is ahead of the industry, its commitment to sustainability is nothing new. For nearly a decade, the company has worked to reduce environmental impact from its stores and products, both in electricity consumption and materials used. In 2015, 78% of all the electricity used in H&M’s operations came via renewable sources, with a commitment to increase this number to 100%.(3) To formalize that promise, H&M joined RE100, a global initiative that brings together companies such as Google, BMW and Nike, which are all committed to using only 100% renewable energy. But even with an overall reduction in electricity use, the company has been steadily increasing emissions on a per store sqm basis, leaving room for improvement in energy efficiency. 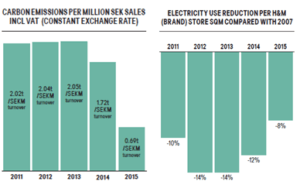 Beyond the company’s energy conservation efforts, in 2013, H&M established an initiative to allow customers to recycle clothing in nearly every store.  This initiative was started after studies revealed that one-third of clothing in the UK goes to landfills (WRAP) and textile waste occupies nearly 5% of all landfill space in the US (EPA) when actually ~95% of this material is reusable or recyclable.(4) Since then, H&M has collected over 22,000 tons of garments to give them a new life. In 2015 alone, the company collected 12,341 tons or the equivalent of 61 million t-shirts.(5) With current technology, H&M is able to create apparel that contains 20% recycled material without any impact on quality or longevity.

Cleaning Up the Whole Supply Chain

Although H&M has been able to make big changes in the production processes that it owns, the company is also trying to influence parts of the supply chain that are not directly under its control. One of the largest of these efforts is a push for water conservation in the production process. Water is a resource that is extremely sensitive to global warming, with changes in rainfall, surface temperatures, overall quality and aquasystems being the most visible.(6) 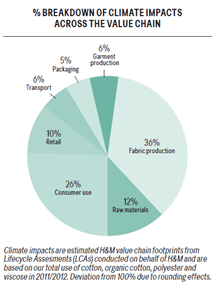 To lessen its impact on this critical resource and key element in its production process, H&M has engaged in several partnerships and initiatives. Currently, nearly 87% of H&M’s water footprint comes from its raw material production.(7) In recent years, the company has worked with the WWF in order to develop and build sustainable water consumption business practices. All H&M partners are being transitioned to a model compliant with the Business for Social Responsibility Water Group’s quality definitions (currently 75% compliant), with a focus on China and Bangladesh and a promise to transition to solely sustainable cotton by 2020. Additionally, the company has developed e-learning initiatives for its employees around the subject of water conservation, with 52,000 employees (35% of total) having taken the courses.(8)

Although H&M is committed to reducing emissions through 2050 in compliance with the UN’s agreement and has made great strides already, “closing the loop” with recycled materials presents a large opportunity. Currently, H&M’s recycled materials still only comprise 1% of its total material usage and overall awareness of the sustainability campaign is low.(9) A combination of a campaign for awareness – of both H&M’s efforts and for consumer reduction of use – and a true push to use recycled products seems to also be the most direct fix to environmental impact. Among other things, this will reduce water consumption and chemical emissions associated with the growing, dyeing and processing of cotton and also reduce landfill waste on the back end. While this may be expensive in the short term, requiring additional R&D for more efficient ways to combine recycled and new cotton and to start going beyond just cotton to other material combinations, there is long-term potential for cost reductions. In an industry heavily reliant on natural resources with many disjointed touch points across the production process, H&M can set the example for others of how to reconcile profitability with sustainability.

Malaria: A Hot Mess in a Hot World